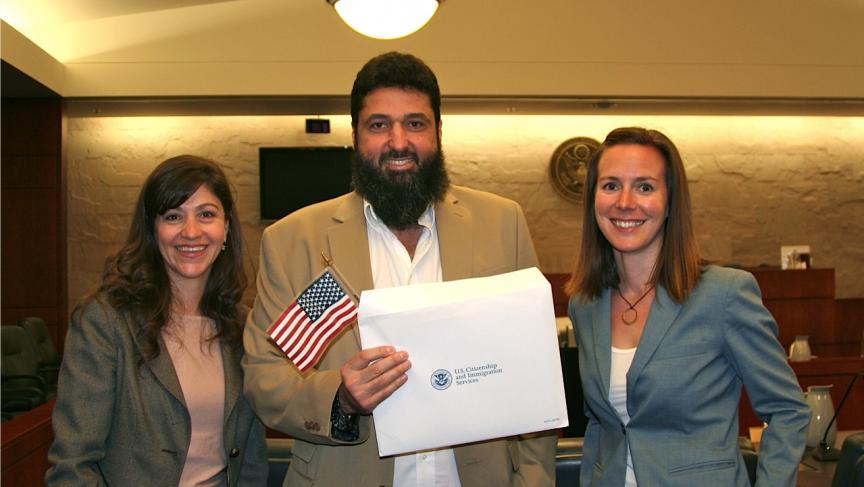 In 2012, Tarek Hamdi, from Egypt, received his US naturalization certificate. He first applied for citizenship in 2001 but faced more than a decade of delays and denials until he won his case.

For most immigrants, the path to US citizenship generally works like this: If you've lived here with a green card for five years, or three if you're married to a citizen, and don't have a criminal record, it should take a year or so to get citizenship.

(Editor's Note: This story is part of a new series all week on PRI's The World about citizenship. There will also be an online discussion about citizenship and its place in the immigration reform debate on PRI.org on Thursday.)

But that’s not how it works for everyone. Meet someone who waited 11 years.

Tarek Hamdi is from Egypt and came to the United States in 1977. He's 54 years old, but came to the US when he was 18 to study engineering in Boston. His plan was to earn his degree and return home. But he found work he enjoyed, on large-scale projects — like the Big Dig in Boston, and other tunnels and freeways. So, he stayed. Then he met his wife, an American, got married and had kids.

I met Hamdi at a café in Los Angeles, where he lives now. He’s tall, with a bushy black beard, and he's a Muslim.

For years, he lived in the US with a green card and didn’t think much about citizenship until Sept. 11. “The calamity that had fallen this country, it tugged at my heart emotionally,” he says. “And it made me feel no longer as an Egyptian but as a citizen of this country.”

In October 2001, Hamdi applied for citizenship through US Citizenship and Immigration Services, or USCIS, which is part of the Department of Homeland Security. Things seemed straightforward. Hamdi says immigration officers said he would hear about his swearing-in ceremony soon.

But he didn’t receive word in 2001, 2002 or in 2012. “I started going to immigration, I started talking to them on the phone,” Hamdi says. “Every single time, they said they could not find my file and to go get your fingerprints taken once again. I must have done the fingerprints and the pictures at least five to seven times.”

But he also knew that Arab and Muslim men faced extra scrutiny post-9/11, so he stuck with it.

For Hamdi, becoming a citizen means being able to vote, no risk of deportation — and being able to visit his family in Egypt without worry.  He has Arabic friends who have been blocked by immigration on their way back to the US.

“So I was getting more determined,” he says. “I never was discouraged. I was going to fight this out. Now I wanted citizenship even more.”

But in 2008, his application was denied. He didn’t know it then, but he was on an FBI list — a list that can include people like Hamdi, free of criminal convictions.

How did he get on it? Years before, Hamdi had donated to an Islamic charity called the Benevolence International Foundation. Hamdi thought that it offered humanitarian relief to refugees.

The FBI later said the charity funded terrorists and duped donors like Hamdi.

Despite not facing any criminal charges, Hamdi’s association with the Islamic charity put his citizenship application on a separate application track. The track is a new program called the Controlled Application Review and Resolution Program, or CARRP.

Immigration officers cross-check applications with FBI watch lists, which can be vast and include criminals and non-criminals alike.

“The CARRP policy creates an additional barrier because it puts people on this track where they are purposely delayed,” says Paul Chavez, with the Lawyers' Committee for Civil Rights in San Francisco. He's working with the American Civil Liberties Union (ACLU) to pull the curtain back on what CARRP does.

Through Freedom of Information requests, the ACLU found some of the triggers that can place applications like Hamdi’s on the CARRP track — from traveling to “suspicious” countries, wiring money, attending certain mosques or, like Hamdi, giving to a charity flagged by the FBI.

“One of the biggest problems we have with it is that it’s covert, that you don’t know, and there’s no method in place to address it,” says Chavez.

USCIS says the CARRP program is about vetting, not profiling, people.

“It would not be based on any demographic group or any type of sorting that we would do whatsoever, because we, as an agency, don’t do that,” says Chris Bentley, a USCIS spokesman. “End of story. It’s all based on the individual case.”

Bentley said the CARRP program improves the evaluation of citizenship applicants. “This,” says Bentley, “is something that not only immigrants expect of us, but the United States public expects, as well.”

“They should check the backgrounds,” he says. “But if somebody like myself, who has been living in this country for over 35 years — I’ve not had one arrest, I’ve had not one conflict with the local police or the FBI — and for me to be delayed like this, for all this time, and be cast as somebody who is suspicious, that’s a waste of resources, a waste of time, a waste of money.”

It took Hamdi 11 years. But a federal judge finally ruled him eligible for citizenship last year. She swore him in on the spot.

Hamdi knows he’s an exception. “I’m confident that there are some other people who’ve been waiting longer,” he says.

But it is unclear how many people like him are still waiting for their citizenship. Or have given up.