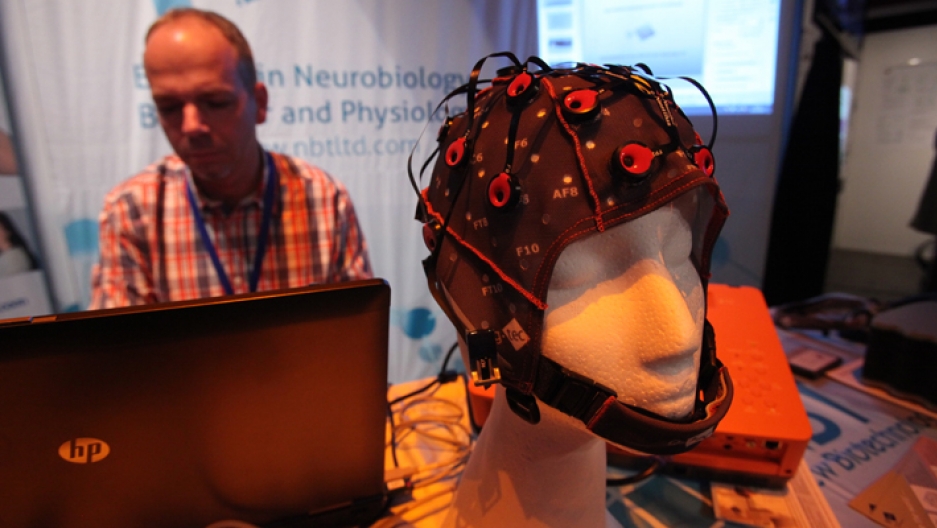 Gunther Krausz of g.tec, maker of intendiX, with the EEG cap that helps patients spell out words.

Israel has long boasted of having the world’s highest number of tech start-ups per capita. Now, Israel’s president is looking to turn Israel from the start-up nation to the brain nation.

President Shimon Peres, who is 90 years old, has become obsessed with the brain. He even has a wacky idea to build an Einstein Museum in the shape of the Jewish physicist’s brain.

“We have a brain on our shoulders that makes our decisions for us without asking us, without explaining to us how does it do it,” Peres said to a gathering of neuroscientists last week in Tel Aviv. “We go on wondering. We are strangers to ourselves.”

Peres has a vision to turn Israel into a factory of neuroscience, modeled after Israel’s success with tech start-ups. To that end, he presided over this week’s first Israeli BrainTech conference, together with Israeli tech genius-turned-brain-obsessive Rafi Gidron.

BrainTech's international committee of judges, including Nobel laureates, awarded $1 million to a team from Brown University led by John Donoghue, director of Brown’s Brain Institute. Beyond the check, the team received an award: a bronze brain. “It’s better than an Oscar,” Donoghue said.

Donoghue’s BrainGate technology sounds fantastical. It's reminiscent of the old television show "Six Million Dollar Man," that opened with the premise, “We have the capability to make the world’s first bionic man -- better, stronger, faster than he was before.”

That’s actually not so far off. BrainGate is aimed at helping paralyzed patients move robotic limbs - with their minds.

“The idea of the technology is to implant a tiny sensor into the brain,” said Donoghue. “This little sensor picks up patterns of activity, electrical impulses, that get translated into a command signal. And It can mean simple things, like move the arm up, right, left, up or down.”

There were other cool brain technologies on display at the conference, too, though some were mostly for fun. One Israeli gadget, MusiGali, uses brain waves to help compose music. (My brain music was kind of a snoozer.) Another, called MindYourPoem, uses your brain waves to write poetry.

A technology out of Austria, called Intendix, actually reads your mind. Users stare at a digital keyboard and spell out words on a screen just by thinking about each letter. It’s intended to give paralyzed people who cannot talk a way to communicate.

There’s still a huge gap, by the way, between what we know about the brain, and what we can do with that knowledge to make us, well, bionic. But slowly, we’re getting there.

Even Gunther Krausz couldn’t believe how well his mind-reading cap worked, as the computer guessed what letters I was spelling out in my head:

*editor's note: this story was updated to clarify the timing of the BrainTech conference and the reference to the TV show "Six Million Dollar Man."