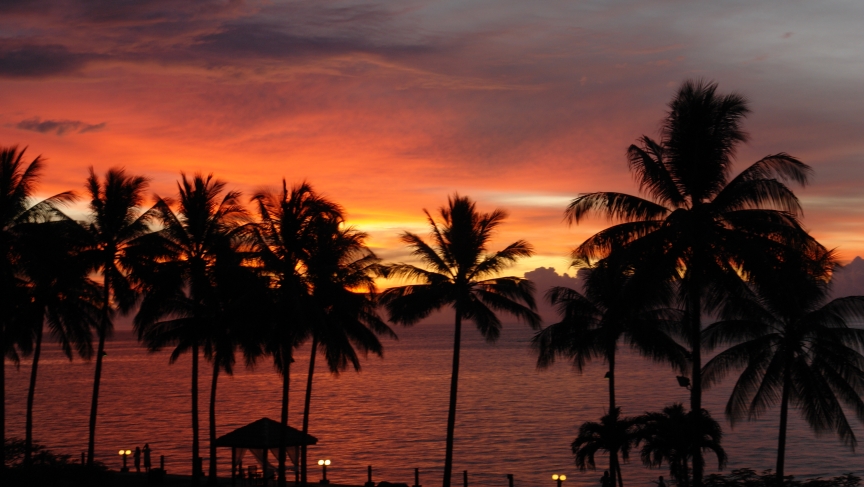 New research from the University of Hawaii suggests climate change may lead to unprecedented weather in the tropics as early as 2020.

When it comes to forecasts of global climate disruption, there are a lot of computer models and numbers out there.

Much of the data seems abstract, and the focus is often on the end of the century. But a study from scientists at the University of Hawaii has come up with concrete numbers that are easy to grasp: the exact moment when the climate in a given place will go outside the range of anything we've experienced in the last 150 years.

Abby Frazier is a researcher in geography at the University of Hawaii. She and her co-authors crunched the results of hundreds of climate research studies and models for a paper in Nature.

The result? Startling predictions of just when climate norms will be outside the range of what we now regard as extremes.

"We thought that by giving a year of when we can start to expect these changes, it would help connect people more closely to the issue, and hopefully get them involved and aware of how urgent it is that we start to take action," she said.

Overall, the research revealed that most places will be regularly experiencing "unprecedented" weather by 2047. That milestone could arrive by 2020 in the tropics, where the impacts are expected to be felt first.

By unprecedented, Frazier and her colleagues mean the point where the projected temperature goes outside the historic minimum and maximum temperatures the cities have experienced in the past 150 years.

"We named that as the year of climate departure — when it goes outside the bounds and does not come back in," she said.

One of the most startling findings was just how soon unprecedented temperatures could start happening in the tropics — as little as seven years.

"The tropics have a small natural climate variability. Their climate is relatively stable, so it doesn’t take much in terms of absolute changes to exceed those small bounds of natural variability," she added. "What our study is showing is that the tropics might be even more vulnerable than the high latitudes because they will start experiencing these changes first. Most of the world’s species are located in the tropics, and those species are adapted to these very narrow climate bounds, so it doesn’t take much to exceed what these species can tolerate."

More bad news: the scientist examined two different scenarios: One where we continue with business-as-usual with emissions and another where we slash emissions. The 2047 date assumes business as usual, but even if we make changes, we'd still see unprecedented conditions by 2069, Frazier's research showed.

"I think we expected, using this conservative greenhouse gas emissions scenario, that the climate departure wouldn’t happen within this century," she said. "I think we were very surprised to find that even if we do take great action now, it’s still going to happen."

What this will ultimately mean is hard to say. But the responses will likely run along a full spectrum.

It's potentially bad news for humans, too, because much of the global population is concentrated in tropical regions. Many of these countries are also among the lowest in terms of GDP, as well. In other words, the nations that will be hit earliet by climate change are the ones least-equipped to respond, Frazier added.

"By the year 2050, we expect five billion people around the world to be experiencing these unprecedented climates," she said.

Frazier called the implications of all this research "striking."

"For me, in terms of emotions, (I) hope that these numbers will end up maybe in policy decisions or can help just raise awareness about the issue," she said. "I think despite the fact that these numbers are fairly scary, it’s exciting in some ways that putting this out there we can actually make a difference."