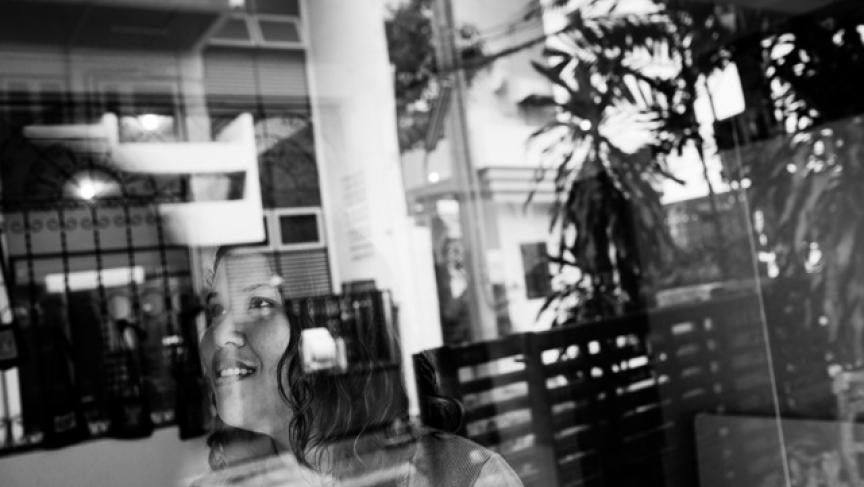 "Mint," 24, is a former sex worker, now working at NightLight, an organization that hires former prostitutes.

Mint says she fell into sex work the way so many other girls from Thailand's poor northeastern region of Isaan do once they land in Bangkok. First, she got a job at a factory; then, a coworker suggested she also work nights at a bar.

Now 24, Mint says she worked as a prostitute on and off for years, making in three days what she would barely make at the factory in over a month. But many clients refused to have safe sex, often resorting to violence if she insisted on using a condom. A couple of years ago, Mint nearly lost her life after such an attack.

“I felt I had hit bottom because I couldn’t do anything,” she says. “I worked as a prostitute, I couldn’t go to the police and ask them to arrest that guy. I had no money to send to my grandma, no money to pay for rent, no friends to go to. It was the worst time of my life.”

A friend suggested she try going to a local church service to seek help. Mint couldn’t understand the language spoken at mass, but she saw people dancing and singing, and “being joyful.” That moment, she says, marked the beginning of her belief in God, and her exit from prostitution. “Now I can do good work that will not hurt my body," she said. "I don’t have to fight all the time.”

Mint now works at NightLight International, a Christian organization that employs former sex workers and sex trafficking victims to make artisanal jewelry. She’s making a living wage — though not as much as she did as a prostitute.

The daughter of missionaries, Annie Dieselberg founded NightLight in 2005 to help women who have been trafficked into sex — or women, like Mint, who worked as prostitutes.

Currently, NightLight employs about 50 women. But it is constantly reaching out to more in Bangkok’s sex districts, offering them the promise of a better life. There are dozens of evangelical-minded groups, large and small, doing similar work throughout Thailand.

Dieselberg says there is a huge need for NightLight’s services. Every other week, she says, news headlines announce a new raid at a Bangkok bar employing scores of underage girls.

The headquarters of the Royal Thai Police Anti-Trafficking Division is where those raids are planned out. Sitting at his desk, General Chavalit Sawaengpuech looks rigid as he responds to the latest US State Department Trafficking in Persons report, which criticizes Thailand for not doing enough to target all kinds of human trafficking. The US government has threatened Thailand with trade sanctions if it doesn’t improve its record on human trafficking.

“This current government has given priority to anti-human trafficking issues," Sawaengpuech says. "We are always calling on all the agencies to take action against it — from the police, to the shelters and the NGOs helping victims. And last year, the Royal Thai Police ordered all police units to spend at least 10 days each month doing anti-trafficking work.”

In other words, law enforcement here is trying to meet a quota — largely by staging rescues at brothels instead of going after the traffickers — even where there isn’t data or evidence indicating the sex workers they are rescuing are victims after all.

“As good as their intentions may be, I think there are a number of potential problems with attempting to rescue someone from their plight, in particular, rescue a sex worker,” says Dina Haynes, a law professor at the New England School of Law, in Boston. “I understand that there is an argument, a feminist argument even, that sex work can’t be consensual. It puts people in the victim role, but it also doesn’t allow conversation about how to solve or resolve; why people choose this course.

Haynes says many American Evangelical groups working abroad often impose their abolitionist agenda, focusing only on sex workers and sex trafficking — instead of other more common forms of human trafficking such as those found in the fishing, farming or construction industries. It’s an uncomfortable topic, she says, but some of these women have chosen sex work as the best paid job they can find. Trafficking isn’t the issue here, she says; it’s poverty and lack of opportunity, and the evangelical emphasis on rescue doesn’t really address that.

But for those working to help young women lured into sex work in Thailand, the recent influence of evangelical groups in the fight against sex trafficking has been nothing but positive.

“I think the process of intervention, especially, needs to be expanded,” says Christa Foster Crawford, an evangelical who works with NGOs that do anti-trafficking work in Chiang Mai. Foster Crawford explains that evangelicals started taking on social justice issues about a decade ago. In the US, Thailand and elsewhere, they have been instrumental in shaping policies that make human trafficking a crime.

Now, she says, they are trying to focus more on raising awareness and prevention, and not just rescues. “In a sense, it’s way easier to go into a brothel and extract somebody — you have to check six months down the line to see if that person is still free.”

Mai, 28, is originally from Burma. She’s worked as a maid, a dishwasher, baker and street food vendor. But none of these jobs allowed her to make as much money as she now makes as a prostitute in Chiang Mai.

“There are good and bad things to any job, but when I came to do sex work, I realized this is a job that gives me enough income to really look after my family and move ahead in life," she explains. "I was not tricked into it, and I don’t see myself as a victim.”

Mai says a friend introduced her to sex work — a friend who was among many rescued in a police raid at a brothel a couple of years ago.

She’s since gone back to prostitution. 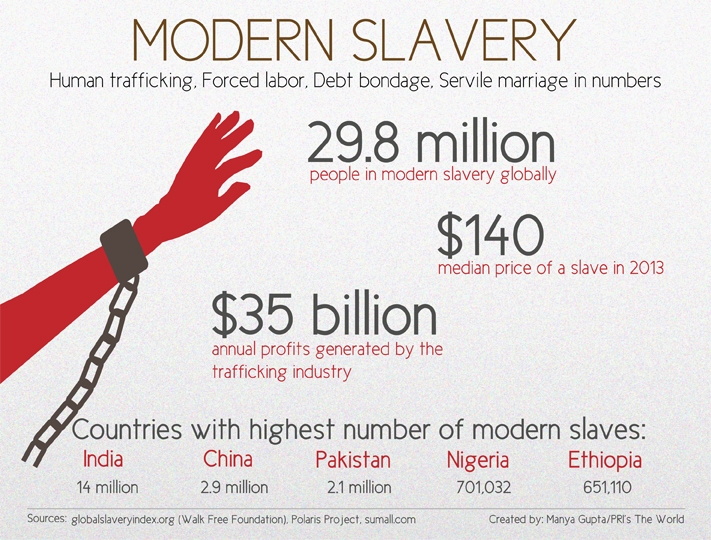 A new study released Thursday by the Walk Free Foundation attempts to measure modern slavery. The above infographic looks at the grim reality of modern slavery through a numerical lens. (click to enlarge the image)