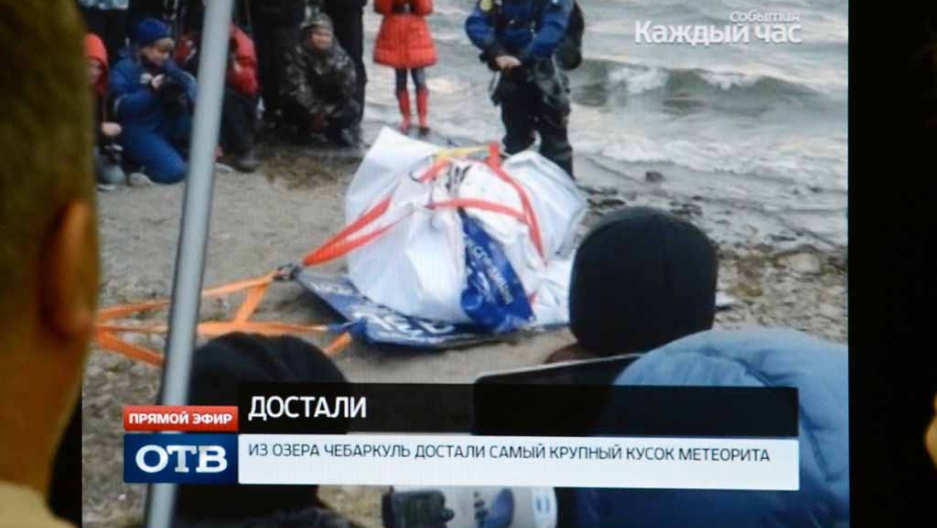 Men watch a computer screen in Moscow on Oct. 16, 2013, as a team of divers pull a 1.5-metre-long (five-foot-long) suspected meteorite from Lake Chebarkul in the Chelyabinsk region. It is said to have been part of a meteor whose ground-shaking shockwave hurt 1,200 people in February.
Credit: -
Share

Scientists working at a Russian lake have recovered a 1,200-pound chunk of a meteor that exploded over Chelyabinsk earlier this year.

The space rock plunged into Lake Chebarkul after falling from the skies Feb. 15.

The shock wave it produced was estimated to be as strong as 20 Hiroshima atomic bombs, shattering windows for miles and injuring more than 1,600 people in western Russia.

This is the largest fragment of the meteor discovered yet.

Scientists attempted to weigh it using a giant steelyard balance, but the rock split into three pieces as soon as it was lifted from the water and then broke the scale.

The scale registered 1,256 pounds before breaking, according to the Associated Press.

The giant rock was taken to a regional natural history museum, where X-rays will be taken to determine what minerals it might contain.

It was buried in thick mud, and it took crews 10 days to pump out the sediment before they could pry the chunk loose.

About 12 other pieces of rock alleged to be from the meteor have been collected so far, the largest of which weighed about 25 pounds, Radio Free Europe reported.