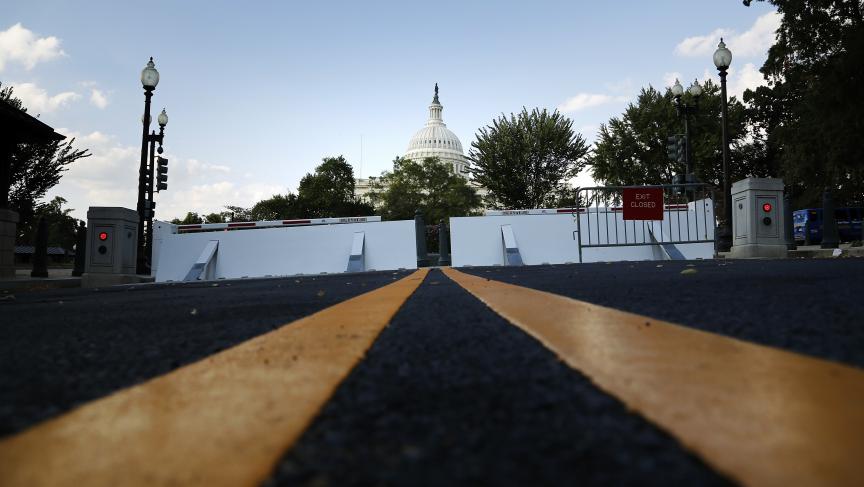 A road leads to the U.S. Capitol in Washington.

Thursday, President Obama declared that, after more than two weeks of fiscal paralysis, there were no winners. He bemoaned the effect that the whole mess has had on the US image around the globe.

"Probably nothing has done more damage to America's credibility in the world, our standing with other countries, than the spectacle that we've seen these past several weeks. It's encouraged our enemies, it's emboldened our competitors and has depressed our friends who look to us for steady leadership," said President Obama.

The good news, said Obama, is we'll bounce back after this. Still, the deal in Washington doesn't really solve anything. It merely kicks the fiscal can down the road a bit to early February, when the debt ceiling will need to be raised again.

Now, it's not unusual for politicians around the globe to kick the can down the road. You could argue that the European Union has been doing that for the past few years with its own debt crisis.

Yet, after years of the US wagging it's finger at the European Union, the Europeans are not quite gloating, but not quite ready to forget US troubles, says Peter Spiegel, the Brussels bureau chief for the Financial Times.

"There's been a lot of schadenfreude going on in the Euro zone for the last few weeks... everyone has been pointing their fingers at the Europeans for two or three years now, about bringing down the global economy, but the Americans are just as dysfunctional as we are," says Spiegel.

And the US version of dysfunction is just the same as the European version, he says. "It's two implacable sides that can't come up with a way forward on the issues of debt and deficit."

The World's Clark Boyd, who has covered Europe's economic struggles from Brussels, says it's not a matter of one power smirking at the other, because the issues of debt and deficit are shared between them.

The US and Europe are also heavily linked through trade. And while both the US and Europe regularly kick the proverbial can down the road, the bigger underlying issue continues to grow. That is, the debt.  As the West deals with a sluggish economy saddled with debt, says Peter Spiegel, the rising economies of China, India and Brazil are developing as manufacturing and tech powerhouses.

"Those good middle class jobs that both Europe and the US built their economy on for the last century, those jobs may be going to China and India irrevocably," says Spiegel. "That's the real concern [and] unless we stop going from crisis to crisis and fighting the short term fight, those long term issues are never going to be dealt with."