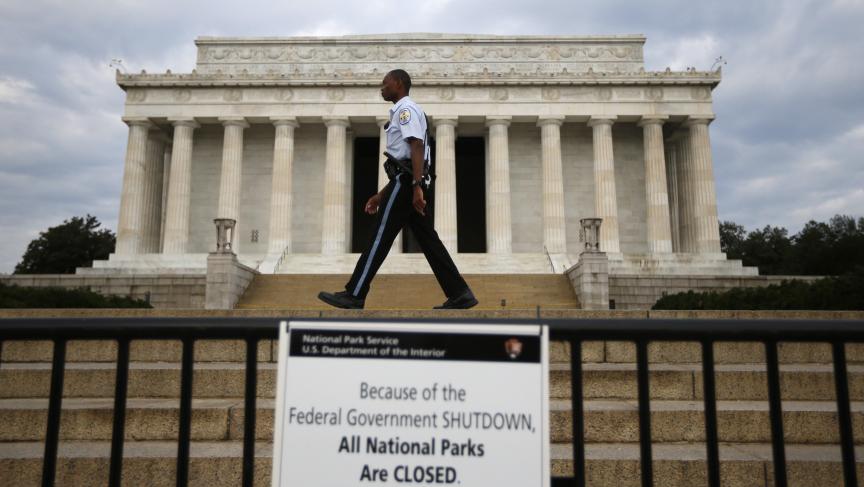 A National Parks policeman walks past a sign after the Lincoln Memorial was sealed off from visitors in Washington, Oct. 1, 2013. The U.S. government shutdown puts up to 1 million workers on unpaid leave, closing national parks and stalling medical research.

As Congress inches toward a resolution to the debt ceiling debacle and the government shutdown — an ending that could really come at any time Wednesday evening — America's standing around the world is taking a hit.

But even if Congress comes through, we could be back at this point in January, staring down another shutdown and another default.

We asked six US expats living in five different countries across the globe what people were saying about the US shutdown, how it was being covered by the local media, and what the shutdown has done to the image of the US abroad.

Jesse Appell is a comedian living in Beijing. He says the US shutdown is all over the newspapers.

"It's a big deal for the government because they own so much of that debt," Appell said. "So they like to publish articles talking about how the US is recklessly endangering the global economy and needs to get its ducks in a row. And there's probably a bit of a fair point to that. For the people on the street, I think it's more of a curiousity than anything else."

Appell says he's been trying to work the debt ceiling debate into his comedy. But it's hard to make jokes about a government that is just that: a joke.

According to freelance correspondent Franc Contreras in Mexico City, the follies of the US shutdown strikes many Mexicans as absolutely bizarre.

"People don't ask me about why it's happening. They basically just tell [me] that they think it's strange," he said. "They can't believe that the world's wealthiest country, the country that Mexico depends on for 80 percent of its exports is shut down and on the brink of default.

"In general, the regular people you meet on the street, they just think it's strange," he added.

"I have been talking to some economists and they're seriously concerned. They say that Mexico is heavily invested in US treasury bonds and that can have a direct affect on their ability to finance major projects." — journalist Franc Contreras

"And this is happening at a time when Mexico really needs to restart its economy," Contreras added. "So if they can't kickstart major infrastructure projects because [of] US bonds losing their value — and that can happen overnight, if this default takes place — then Mexico can fall into a really serious situation."

Contreras adds that the Mexican stock exchange rises and falls based in large part on what happens in the US. Wednesday morning, it fell.

Bianca Vazquez-Toness is a journalist living in Mumbai. She says the shutdown looks crazy to people there.

"Well, initially people asked mostly about the shutdown, you know, what does it mean? Why is this happening? How is it that these lawmakers can't come to an agreement? What does it mean for the government to be shut down? What's the impact?" she recalled. "People have a lot of questions about what that actually looks like because it sounds like the kind of thing that would happen in a banana republic or a smaller, less important country."

Toness says it just doesn't make sense to many Indians.

Nor does it make sense to the Greeks. Brady Kiesling has lived in Athens since 2000. He's a former US diplomat and now a writer.

"Greeks are extremely puzzled by what's going on in the United states," he said.

"Greece is now in a crisis and is putting padlocks on lots of museums and archeological sites and other things of public utility because they can't afford to keep them open. But when a rich, successful country is voluntarily putting padlocks on things... It's crazy to them." — former diplomat Brady Kiesling

Kiesling says many Greeks think it's absurd a few crazies in government can hijack a superpower.

That idea of power is important to remember, says Ursala Lindsey, a journalist in Cairo.

"I think America, to Egypt, is power. It's outside power. And sometimes people here actually, greatly overestimate American power," she said. "And I think that one of the things that we've seen in US foreign policy in the region, in the Arab world in particular, is the limits of its power. And the shutdown is perhaps another indication that maybe people realize that America is not omnipotent."

But Lindsey says many more Egyptians aren't paying attention to the US shutdown.

The same is going on in Peru. But Journalist Annie Murphy says it doesn't stop Peruvians from telling her what they think about it.

"People are very disappointed and there is also an element of the ridiculous, too," she said. "Because it's, like, could this really be happening? I mean, this is a country that went through a really bloody civil war, widespread poverty, just huge real crises."

"They are looking at the US and saying, 'you guys created this crisis yourselves. You know, it wasn't like you had guerrillas or dictatorships, or something like that.' So I think there is this real sense of the US kind of being immature." — Journalist Annie Murphy

Murphy says the US definitely doesn't look good to the rest of the world right now.

So what do you think?