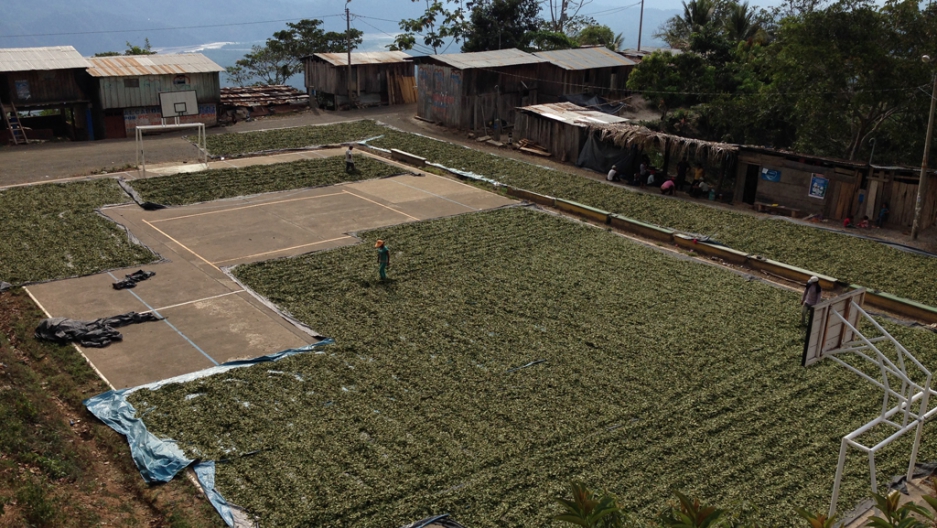 Editor's note: This article is one of a two-part series on coca production in Peru, reported during a rare visit to the remote VRAE region, the world coca capital. Click here to read about how farmers are threatening to rise up violently if the US-backed government tries to eradicate their coca.

VRAE, Peru — A sea of coca leaves — the key ingredient in cocaine and crack — lies drying in the blazing sun as farmer Teodoro Alzamora complains bitterly about the grinding poverty trapping his village.

“Coca’s what gives us clothes to wear and medicine when we are sick. It feeds our children,” he says, explaining that his only source of income is the few hundred dollars, after costs, he earns per coca harvest.

“We are not ‘narcos.’ What else are we supposed to do? When we grow cassava or bananas no one wants to buy them. But they come almost every day to buy our coca.”

Below us stretches Peru’s lawless Apurimac and Ene Valley (VRAE by its Spanish initials) — which produces more coca than any other zone on the planet.

Booming production here has now helped propel Peru to surpass Colombia as the world’s No. 1 source of cocaine and other coca-derived narcotics — and placed it center stage in Washington’s decades-long, trillion-dollar “war on drugs.”

Yet in this remote hamlet called Los Angeles, with its dozen wooden shacks perched on the side of the valley as it sweeps down from the Andes into the Amazon, the tranquility belies the area’s ferocious reputation.

While Alzamora, 50, talks, a young mother, babe in arms, strides barefoot through the ankle-deep coca leaves, mixing them up to ensure they dry evenly.

Her giggling young daughter, meanwhile, rolls in the leaves and throws armfuls into the air.

According to United Nations numbers, there were 19,965 hectares (49,000 acres) of coca bushes in the VRAE last year — almost as much as in all of Bolivia, and nearly half Colombia’s national total.

Not coincidentally, the valley’s rugged, densely forested terrain is also the last hideout for remnants of the Shining Path insurgents who once bathed Peru in blood.

They still regularly ambush army patrols here, shoot down helicopters and charge the drug traffickers protection — reportedly $5,000 per ton of cocaine smuggled out of the valley — for keeping the security forces at bay.

Yet coca has been a central, sacred part of South American culture for millennia. Poor Andeans routinely chew the leaves as a mild stimulant and to combat ills from altitude sickness to menstrual pains.

As a result, cultivating modest amounts of it, while registering yields with Enaco, Peru’s official coca board, is legal.

That explains why the VRAE’s estimated 10,000 smallholder farmers like Alzamora are baffled that some view growing this traditional crop as wrong.

“I’ve never even seen it,” Alzamora says when asked about cocaine. “I don’t really know what it is.” But his unease leaves no doubt that he understands perfectly well that the mysterious white powder is trouble.

Just a fraction of the VRAE’s coca will pass through Enaco. The rest is bought by “the others,” as locals refer obliquely to the intermediaries for drug cartels who visit the villages and often pay a 10 percent premium over Enaco rates.

It will end up as cocaine, crack or cocaine paste — a name used to cover several kinds of cheaper, frequently impure and highly addictive compounds favored in South American slums.

The intermediaries even lend growers as much as 1,500 Peruvian soles (roughly $600) ahead of the harvest to allow farmers to pay the laborers, usually landless “campesinos,” needed to pick the ripe leaves quickly before they spoil.

In a region where few have access to banks, and most lack the land titles required to get credit, the narcos appear to be the only trusted business partners these farmers have.

It takes roughly a ton of dried leaves to produce a single pound of cocaine, so the cartels process the leaves as much as possible before smuggling their wares from the VRAE.

That involves soaking the leaves first in barrels of gasoline and then in battery acid to produce a paste made up of roughly 50 percent cocaine. The drug is then crystallized by adding caustic soda (sodium hydroxide).

Dozens of field labs lie hidden in the precipitous forests above us. Army and police patrols regularly find and destroy them, only for labs to pop up again elsewhere as the cartels play cat and mouse with the security forces across these hills.

And an estimated 10 clandestine airstrips dot the valley floor, from where light aircraft ferry the drugs out of the VRAE under cover of darkness.

Typically around $10 per pound of leaves, coca prices vary suddenly in different parts of the valley, depending on whether security forces have taken out a local lab or landing strip.

Backed by Washington, the government of President Ollanta Humala is now tightening its grip on the VRAE.

His security forces in August killed two top Shining Path leaders and this month arrested 23 alleged collaborators of the group, including arms suppliers and even accountants, across the valley.

The government plans to open a military airbase here and is in the process of finally paving the road into the valley, to better connect the isolated region with the rest of Peru.

But the dirt track of endless switchbacks above terrifying abysses that currently winds down into the VRAE is closed at night, after the Shining Path mounted an arson attack last July on the heavy machinery used to lay it with tarmac.

Yet Alzamora and most others who spoke to GlobalPost here doubt that will seriously dent coca production.

Things will really change only by addressing the economics they claim force them to sow coca rather than other crops.

And given today's low prices for coffee and cacao, the villagers in Los Angeles insist, a farmer would need 5 acres of either crop to make as much money as from a single acre of coca.

For Alzamora and his neighbors — who have no electricity, potable water or sewage system — that means coca is their only source of income.

Everything else he grows on his steep 7-acre plot of land, including bananas, cassava and pineapples, is consumed by his family of six.

Meanwhile, buyers for crops other than coca rarely stray into the VRAE, and getting their produce to market out of the valley is too time consuming and costly for the farmers.

One of Alzamora’s neighbors, Hugo Tacuri, head of a national indigenous federation, does acknowledge the growers have some “moral responsibility” for the illicit drug trade.

But he also stoutly defends his people’s right to grow coca, as hundreds of generations of their ancestors did before them — and notes it was a German 19th century chemist, rather than Peruvians, who first figured out how to extract cocaine from coca.

“Just one of the compounds in coca is used to make cocaine but there are many more,” Tacuri says.

As he’s speaking, he shares a bowl of bananas outside his wooden lean-to. He dreams aloud about the VRAE finally developing economically, with the communities manufacturing legal coca products, such as teas and candies, instead of just selling sacks of dried leaves.

“They should stop demonizing coca and let Peruvians be proud of our heritage.”

Alzamora adds: “We would grow other crops if they performed like coca. Maybe with more land, or technical help from the government, we could change. But right now we have no choice.”