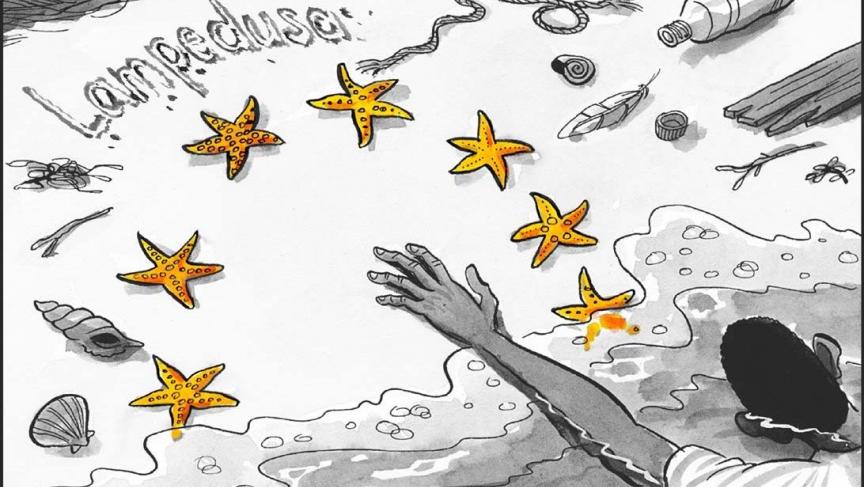 Britain's Peter Schrank comments on the crisis on the Mediterranean island of Lampedusa. Nearly 400 migrants from Africa and the Middle East have died in recent weeks trying to reach the Italian territory. Italy has asked the European Union for help accommodating the new arrivals.

Now in China, according to the Los Angeles Times, farmers are being asked to raise hundreds of thousands of cockroaches.

The Guardian has been looking at what Saudi Arabia is making of the improving relationship between Iran and the US.

So heavy, it actually broke the scale

The BBC was on site when Russian scientists raised the largest surviving chunk of a meteor that hit Russia earlier this year. And yes, weighing it was a problem.

NBC has been looking into whether meteor impacts could lead to a new era of cooperation between Moscow and Washington.

Time reports on a situation in Moscow, where a Dutch diplomat was assaulted by two men posing as electricians. They tied him up and then drew a heart and the letters LGBT on a mirror. The incident is the latest in an escalating war of words between Russia and the Netherlands that started when the Netherlands took legal action to free Greenpeace activists imprisoned in the Russian Arctic.

We told you Tuesday about a bomb attack in Myanmar, but Quartz is drawing a connection between nine separate explosions across the country in recent days. There are multiple theories for what's going on in the country, among them a desire to derail talks between the government and minority factions.

Typhoon Wipha pounded Japan Wednesday, killing 17 people and dropping between 20 and 30 inches of rain on different locations around the country. But, as serious as it was, there were no major disasters, including at the badly battered Fukushima nuclear plant. Some 50 people are still missing, according to Reuters.

RT @sheeraf: My first @BuzzFeed video! watch me hunt for tourists in Cairo! (Spoiler: didn't find any) with @taratw http://t.co/jWL2Zufofa”

It's not exactly weather, but mother nature dealt a blow to Papua New Guinea Wednesday. A fierce 7.1 magnitude earthquake rocked the South Pacific island, though there are no reports yet of the extent of damages. Officials, according to the Associated Press, said a tsunami was unlikely.