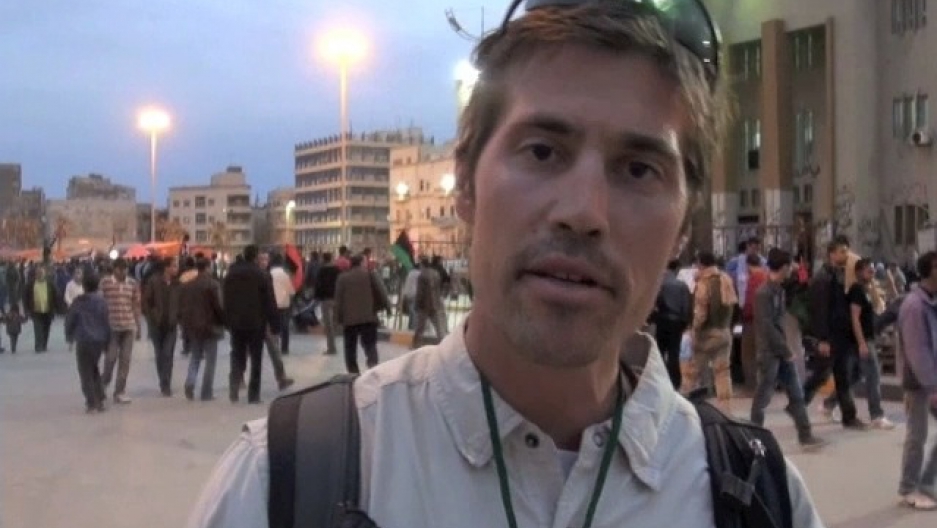 Journalist James Foley reporting for GlobalPost from Benghazi, Libya in mid-March. Foley, along with three other foreign journalists, was detained by forces loyal to Libyan leader Muammar Gaddafi on April 5.
Share

BOSTON — The parents of American journalist James Foley, who was kidnapped while reporting in Syria last November and has been missing ever since, issued a new appeal for information about their son today, the eve of his 40th birthday.

“We are in anguish that our son is still missing in Syria now for almost 11 months,” said Diane Foley, Jim’s mother. “Almost one year of his life is gone. Jim will be 40 years old this Friday, Oct. 18. We want to let him know how much we love him and how hard we are working to find him and bring him home.”

John Foley, Jim’s father, added, “We don’t know who has detained Jim. But we beg his captors to recognize that our son is an innocent, objective journalist who has done no harm to anyone and to please set him free.”

The Foleys also made their appeal Thursday on NBC's Today Show.

GlobalPost, for whom Foley had reported in Syria, has mounted an extensive international investigation over the past year to determine who kidnapped him and where he is being held. Since the last public update on May 3, significant additional research has been undertaken throughout the Middle East, including along the Syria-Turkish border, in Lebanon, in Jordan and in other locations. In light of recently obtained information, and in the best interests of Foley’s security, the Foley family and GlobalPost have decided that no further details about his likely captors or the location where Foley is being held can be released at this time.

The Syrian government has denied on several occasions that it is holding Foley. Syrian President Bashar al-Assad has himself issued both public and private denials. Syrian Ambassador to the United Nations H. E. Bashar Ja’afari, in a face-to-face meeting this summer with John and Diane Foley at the United Nations in New York also said his government was not holding their son. Other denials have come to GlobalPost’s attention from private and diplomatic sources. The Syrian government has also never acknowledged that it is holding another American journalist, Austin Tice, who has been missing in Syria since Aug. 13, 2012, despite many entreaties from his parents Marc and Debra Tice of Texas. Tice was reporting for McClatchy Newspapers and The Washington Post.

GlobalPost, with valuable assistance from David Bradley, chairman and owner of Atlantic Media, reopened its prior investigation into the possibility that Foley had been taken prisoner by one of the numerous jihadist groups now fighting the Syrian regime. Despite extensive research and investigation, no conclusive evidence has been found indicating that Foley is being held by any rebel group.

Throughout the past 11 months, numerous individuals have come forward professing to have information about Foley. Some of them have claimed to know who was holding him and where. All of these potential leads have been carefully investigated and none has so far proven to be credible. In some cases, the individuals were clearly seeking to take financial advantage of the family’s desperation to find their son. Moreover, the kidnappers have never communicated directly with the Foley family or with GlobalPost, nor have any ransom demands ever been made by those who are holding him.

Recently, two other American journalists escaped from Syria after being held prisoner for considerable periods of time. Jonathan Alpeyrie of New York City was kidnapped on April 29 by a jihadist group operating near Damascus. Alpeyrie told GlobalPost that he was beaten and threatened with execution during his captivity. In late July, with the assistance of individuals inside and outside the country, he was able to gain his freedom and his case became public in early August.

Matthew Shrier, also of New York City, was kidnapped in Aleppo, Syria’s largest city and the scene of intense fighting, on Dec. 31, 2012. He was held there until managing to escape in late August. Shrier told GlobalPost he was held prisoner by Al Nusra, which has been labeled a terrorist organization by the US State Department. Shrier said he was held with several other Westerners who have not been publicly identified. He told GlobalPost he never saw Foley during his almost nine months of captivity nor did he hear any information about him. Based on his experience with Al Nusra, Shrier said it was clear to him that the group had no intention of releasing any of its Western captives.

In addition to Foley and Tice, at least three other Americans are being held prisoner in Syria, including two other journalists, according to information obtained by GlobalPost. The names of the other journalists are being withheld at the request of their families.

In recent months, the number of kidnappings of Western journalists and humanitarian workers has escalated. Kidnappings now appear to have become a deliberate strategy for some rebel groups. Many news organizations, including GlobalPost, consider Syria to be too dangerous now to permit their employees to report from rebel-held areas of the country. As the civil war stretches into its third year, the conflict has become increasingly difficult with neither side seeming to have the ability to defeat the other.

According to the Committee to Protect Journalists, 17 journalists have been killed in Syria this year, the most of any country in the world, and 15 others are listed as imprisoned. The exact number of journalists who, like Foley, are missing in Syria and who are presumed to be either captured or possibly no longer alive is very difficult to determine accurately.

Foley had reported for GlobalPost in Afghanistan and in Libya before covering the civil war in Syria starting in 2012. Foley also contributed reporting to Agence France Presse during his time in Syria. His last article for GlobalPost detailed the growing frustration with the war among civilians in Aleppo.

While covering the Libyan civil war in 2011, Foley and two other journalists, American Claire Gillis and Spaniard Manu Brabo, endured a 44-day captivity in April and May of that year at the hands of then Libyan strongman Col. Muammar Gaddafi. A fourth journalist, South African Anton Hammerl, was killed when the journalists were captured by Gaddafi fighters near Benghazi in eastern Libya. Foley later returned to Libya to cover Gaddafi’s fall and eventual death. Foley and GlobalPost senior correspondent Tracey Shelton were at the scene of Gaddafi’s capture in October 2011.

In Syria, Foley was intercepted by a group of armed men in a silver colored van on a road near the town of Taftanaz in the northern part of the country on Thanksgiving Day, Nov. 22, 2012. Two eyewitnesses provided details of the incident.

Philip Balboni is the chief executive officer and co-founder of GlobalPost. He has directed the effort to find and free James Foley since his kidnapping almost one year ago.