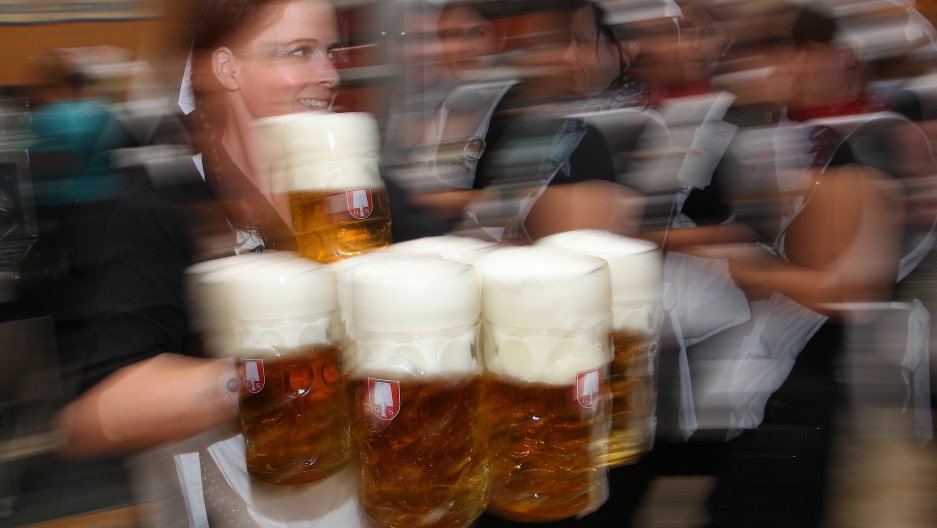 However, several weeks before this year's event, an American kindergarten teacher named Matt Walthall was trying to introduce Germans to something new: an amber-colored California steam lager. Manning a stand at another beer festival here, he poured a pint for a man with rippling muscles and an orange tan.

The scowling customer took a skeptical sip before spitting it at Walthall's feet with disgust.

“This smells like cleaning solution!” he complained. “If I have to go to the hospital, it’ll be your fault!”

That may seem like the equivalent of carrying coal to Newcastle.

In fact, many of the world’s great variety of beers are almost unknown here because Germans tend to drink one kind: Pilsener, the pale lager that’s brewed in very watery form by America's Anheuser-Busch.

Most Germans have never tasted a steam lager, an India Pale Ale, an Irish stout, or any of the other non-German varieties that have swept the US market since the late 1980s.

However, the parochial attitude may be disappearing. Although the German light, dark and Pilsener varieties of lager and seasonal varieties such as the wheat-based Hefeweizen overwhelmingly dominate the market, the popularity of microbreweries and brewpubs is growing quickly.

Small brewers are increasingly experimenting with ales and other imported styles, according to Dieter Pollock, head of sales at Bamberg, Germany-based Kaspar Schulz AG, the world's oldest manufacturer of brewing equipment.

Next to Anheuser-Busch, SABMiller, and other giants, some 900 of Germany's 1,300 breweries are small-scale outfits that produce less than 65,000 barrels, compared with around 100 million for Anheuser-Busch. But the true microbrewery — defined by a production volume of less than 15,000 barrels and an attitude that has made varieties such as the Alchemist Heady Topper or Stoudt's Smooth Hoperator cult favorites in the United States — is a relatively new animal.

Microbreweries make up the fastest-growing segment of the German beer market, with 3,000-barrel operations and brewpubs accounting for around 70 percent of all startups, Pollock says. Nearly all of them are brewing ales and other imported varieties, as well as once-rare regional specialties such as Brewery Bayrischer Bahnhof Leipzig's Gose beer, a sour-tasting style made with lactic acid, cilantro and salt.

It has a newly opened weekends-only bar and a business model based on community-supported agriculture, which provides members with a monthly allotment of beer as well as volunteer time to scrub floors and heave kegs.

The Vagabund bar sells a variety of other German and American craft beers along with its own brews, offering a new market for outfits such as Heidenpeters, which otherwise operates only three taps at a Berlin market hall.

Because Vagabund doesn’t sell any mass market brands — which in Germany often own their own bars or offer owners reduced rates in exchange for a monopoly on their taps — the three-nights-a-week hobby already sells much more beer than three teachers can produce.

Having stunned other local brewers with the amount of craft beer they're able to sell, Walthall says, he and his partners now often find themselves doling out advice to rivals that once laughed at their ambition.