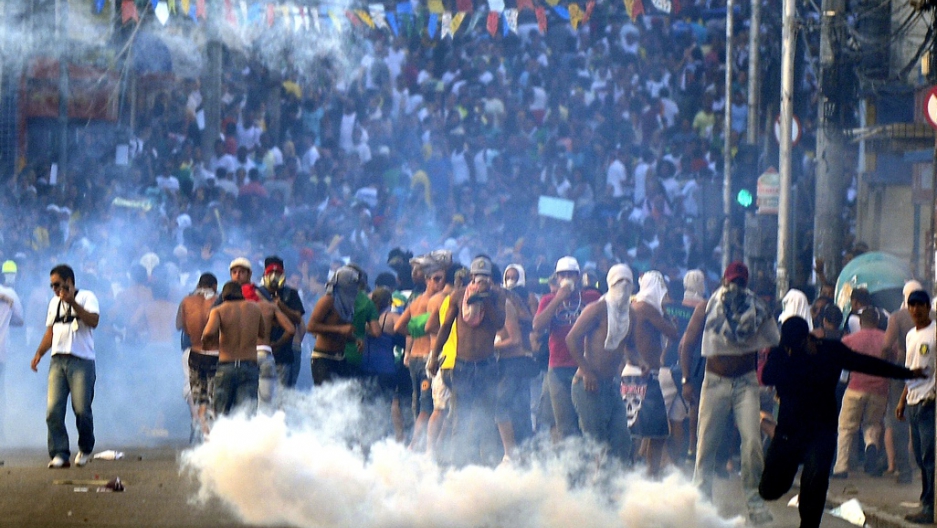 Editor's note: This article is part of an in-depth series on how Brazil's harsh household economics spurred a mass protest movement and still bubble under the surface of Latin America's biggest nation. Click here to read about gaping wide price gap between Sao Paulo and Boston, and click here to read about the shame of a "dirty name" in credit-crazy Brazil.

SAO PAULO, Brazil — Dernival Albuquerque pins pictures of Mickey Mouse on the plywood wall above his thin mattress, and scribbles the iconic mouse ears in the corners of his ramshackle room.

Why the Mickey fetish?

The squeaky-clean cartoon may seem an odd emblem for a self-professed teenage rebel, who said he joined the first wave of massive street protests that rocked Brazil earlier this year.

But the young man’s predilection for perfection makes some sense, considering his surroundings. Perfection isn’t something Drix gets to see much.

His family shares a tiny apartment on an alley in one of the rougher areas of the Paraisopolis favela, or slum, in Sao Paulo.

A few weeks ago, his best friend, 17-year-old Silvana Silva, showed up. She’d been kicked out of her parents' home. Now she shares his room, sleeping on an old piece of foam in one corner.

At night, they can hear rats scurrying around on the tin roof.

Despite Brazil’s boasted low unemployment and more than a decade of economic boom times, this country’s crowded, expensive megacities remain harsh places for the young and under-qualified.

Figures from the United Nations show that in 2009 nearly a fifth of Brazilians ages 15 to 19 weren’t in education, employment or training.

Across Sao Paulo, Brazil’s biggest city and financial hub, millions of teenagers like Drix and “Sil” struggle from week to week, surviving off their parents, support from friends and occasional low-paying, short-lasting jobs.

The challenges facing Brazil’s youth provided ample fuel for the protests that flared up around the country in June.

More than any other group, teenagers like Drix and Sil found a collective voice in the movement, said Paulo Sotero, director of the Brazil Institute at the Woodrow Wilson International Center for Scholars, in Washington, DC.

“The protests led to a complete change in the political landscape in Brazil,” Sotero said. “The youth, which has typically been alienated from the political discussion, is now clearly a new layer of that landscape, and can be mobilized.”

Both times, her plans were shot down by legislators, who said they were unconstitutional and impractical.

The demonstrations have since quieted down in Sao Paulo. Protests planned for Sept. 7, Brazil’s independence day, drew far smaller crowds than many expected. While smaller, violent clashes continue in Rio de Janeiro, the public displays of dissatisfaction so far haven't matched the levels seen last season.

Drix, Sil and their friends are waiting for the movement to rev up again. Sil vowed she's far from appeased by any promises from politicians.

“What the government is doing is robbing us,” she said. “You pay such high taxes that everything should be great, but it’s not. It sucks.”

The atmosphere at the marches in Sao Paulo in June and September was electric, Drix and Sil said.

Finally, it seemed that the sleeping giant had awoken: Brazilians were ready to force their government to tackle the country’s deep-rooted problems.

The driving force to this new social movement was money — or lack thereof, Drix said.

Drix is eligible for unemployment benefits totaling 796 reais (about $360) a month. When Sil was working (in “internships,” as low-paying jobs for under-18s are known in Brazil), she earned about 424 reais ($192) a month.

You can only survive on such little money if you’re smart, Sil said.

You’ve got to know exactly how much your monthly budget is, for everything from bus fares, to food, to the little necessities of youth, she said.

But even with the best of planning, managing your money in Brazil has become almost impossible, the teenagers said.

As soon as the government increases the minimum wage, the price of food at the favela supermarkets magically goes up too, Drix said.

Prices for everything from milk to sneakers fluctuate so wildly, he said, that it’s hard to know how much a week’s food shopping will cost from one week to the next. He can’t understand why Brazil’s government doesn’t do something to stop prices from yo-yoing around.

Professor Edmund Amann, head of economics at Manchester University in the United Kingdom, who studies Brazil’s economy, said Drix has a point. After years of relatively stable levels, inflation is once again a concern in Brazil, he said.

Compared to the United States, where inflation has rarely risen above 3 percent in the last decade, Brazil’s annual inflation rate has hovered around 6 percent for the last five years. Estimates from the Brazil Central Bank show inflation remaining between 5 and 6 percent well into 2015.

Because Brazil failed to invest in its infrastructure or reform its archaic tax code during its 10-year “economic miracle,” consumers still suffer from prices inflated by the cost of getting goods to market and multiple layers of taxes, Amann said.

While Drix and Sil don’t quite understand what the government has failed to do, they know it now costs them almost six times as much to buy a chocolate Kinder egg as it did when they were kids.

‘They can’t stop us’

Drix and Sil said they learned a powerful lesson during the protests over bus fares: If the people make their voices known, things will start to change.

The city scrapped its proposed 20-cent transit fare hike after the protests in June, a victory that imbued Drix, Sil and their friends with a new sense of the power they possess as part of a much vaster group.

But Sotero said that while he doesn’t doubt the continued frustration of teenagers like Drix and Sil, he also doesn’t expect large protests to erupt again in Brazil any time soon.

“We’re a placid bunch, Brazilians,” he said. “Maybe, during the World Cup, the government will be tested, but it takes a big event to mobilize people in Brazil.”

Drix and Sil aren’t so sure.

While the giant may have gone back to sleep for a bit, they said, without significant, wide-ranging political changes, they’re sure he’ll be back.

“The politicians think they own the world. But they can’t stop us,” Drix said.