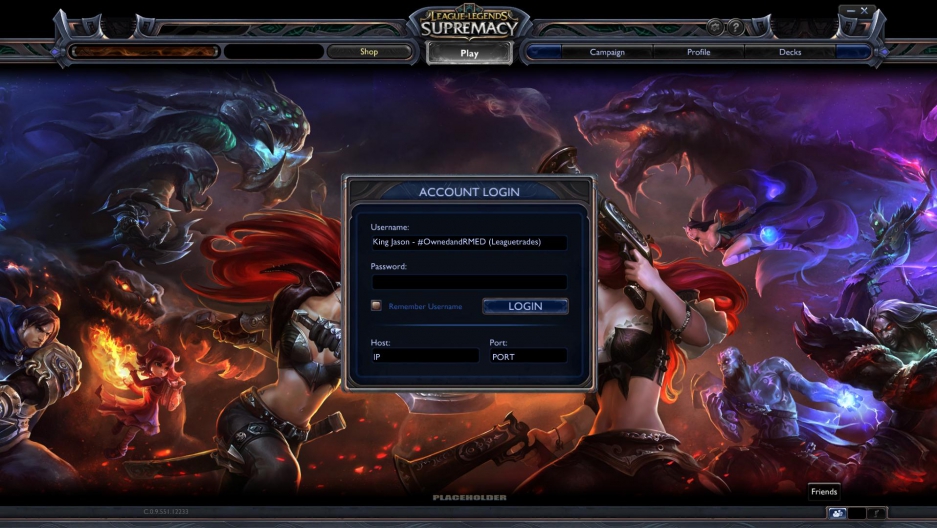 The Twitter account of Riot Games President and Cofounder Marc Merrill was hacked and used to publish screenshots of a previously unannounced game late Sunday night.

Riot Games is the developer of "League of Legends," the multiplayer battle-arena game that is world’s most-played on PCs.

The hacker, who called himself “Jason (God),” tweeted out what he claimed to be a screenshot of the League of Legends "Supremacy" card game. He asked for retweets in exchange for unreleased images and information.

“Well, I think this would be a good time to show off Riot’s card game, who wants to see pictures? 50 re-tweets for pictures. –Jason (God),” the hacker tweeted before providing an alleged image of the login screen.

Merrill lacknowledged the hack but disputed the allegations.

“Yup, someone got onto my Twitter account. Yup, someone shared some old screens from one of the many prototypes we’ve experimented with,” Merrill tweeted after regaining control over his account.

Riot games trademarked the Supremacy name in 2012, and fans of League of Legends have speculated ever since about what new product might take the name. Would it be a new League of Legends game type? A game for mobile Android and iOS platforms? A brand new series?

Whoever hacked Merrill's account capitalized on the interest of curious fans.

“Did i [sic] mention this game was fully completed, but never released? Riot doesn’t want you to play this game. Take it up with them,” the hacker said in a later tweet. The hacker also claimed to have a 200 MB file containing all the card images.

A representative of Riot Games would not further clarify if the game the hacker accessed was a long-dead past project or one currently in development.

"It's not a game that was 'finished' as was alleged. That was just a complete fabrication,” said Riot’s Chris Heintz. Heitz said Merrill’s tweets after regaining control of his account were the company's only further statement.

One anonymous source told Forbes that there is, indeed, a game in development by the name of Supremacy. But it remains “very much in the beta stages,” the source said.

“It does exist. It was added to the test realm as a CCG (collectable card game) within League [of Legends], it was selectable, so I’ve seen it… but it’s very much in beta stages,” said the source.