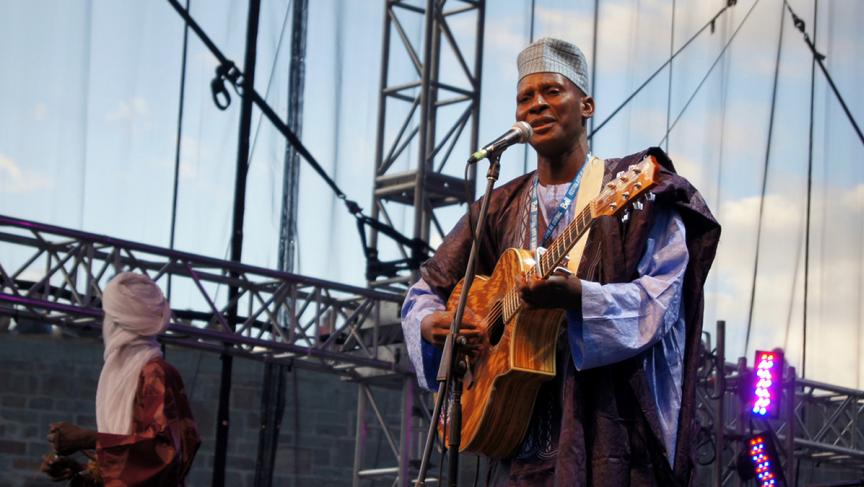 Brian Eno, a rocker, composer, and musical curiosity seeker, is in Mali right now. He is about to hit the road with Malian and other European musicians in an ongoing cultural exchange known as Africa Express. Malian singer-songwriter Sidi Touré says the deep place of music in that country was interrupted by the recent civil war.

When war broke out last year, Muslim extremists banned music, among other things, in the areas they controlled. That was more than conservative. It was cutting off a central cultural ingredient in Mali's life.

"War was always a last resort," he says. "For ages, we've gotten along. We've seen people from the Songhai tribe marry Tuareg people and Arabs have married Tuareg, and vice versa. So war shouldn't have happened."

But it did. Touré says it doesn't matter if it's Arabs or Tuaregs, it's the people at the bottom who suffer.

"I can't tell you how awful it made me feel to watch Malians last year flee their towns," he says. "It is like they became homeless beggars."

He says nothing can replace where you are born — and that reveals more about his music than almost anything else he can say. Because Touré's music is about home.

A quick glance at the songs on his new album "Alafia" reads like a short list of life in Mali.

In English, you've got tunes titled "the water," "the butcher," "the army" and "street medicines."

"Malian music is so sophisticated," says Eno. "It's so complex, interesting and so evolved that it would be a little bit presumptious to walk in after a few days in the country and say, 'yeah I know how to sort this stuff out.'"