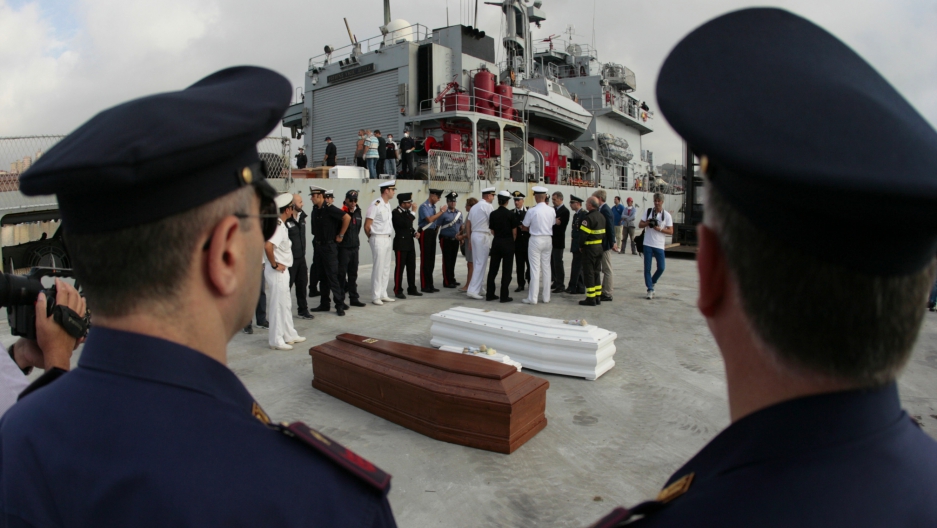 October 15, 2013 in Porto Empedocle near Agrigento in Sicily. Dozens of burials in anonymous vaults began yesterday in a small cemetery of Piano Gatta near the city of Agrigento in Sicily, even though Prime Minister Enrico Letta had promised to hold a state funeral for the victims. Italy's worst-ever refugee tragedy happened in the early hours of October 3 when a boat laden with Eritrean and Somali asylum-seekers caught fire, capsized and sank within sight of the coast.
Credit: MARCELLO PATERNOSTRO
Share

Italy stepped up its naval operations in the Mediterranean on Tuesday to fight human trafficking and protect seafaring refugees, according to Reuters, after boat accidents claimed hundreds of lives earlier this month.

The Italian navy said Tuesday that it had rescued a total of 290 people in two separate operations in the Mediterranean, according to Agence France-Presse.

At least 359 people, mostly Eritrean and Somali migrants, died when their boat capsized off the Italian island of Lampedusa on Oct. 3. Another accident earlier this week took the lives of at least 34.

Italian Prime Minister Enrico Letta on Monday called for reinforcements to the European Union's border patrol. “But we cannot wait for the European institutions and parliament when we are talking about human lives," he said, according to Euronews. "We have to act immediately.”

"It will be a military and humanitarian operation to reinforce surveillance and rescue capabilities in the open sea, which will increase safety levels and save lives," he said, according to Reuters.

With most of its boot-shaped bulk exposed to the sea, Italy has become a key destination for refugees from Africa as well as an important transit point for human traffickers.

The government on Tuesday moved to deter the latter and help save the former by deploying drones, warships and helicopters to the Mediterranean, reported AFP.

Sophisticated radars and night-vision tools will also be made available to authorities to help prevent another boat accident, said AFP.

Many victims of the boat accidents were buried on Monday and Tuesday in Sicily, according to local press.