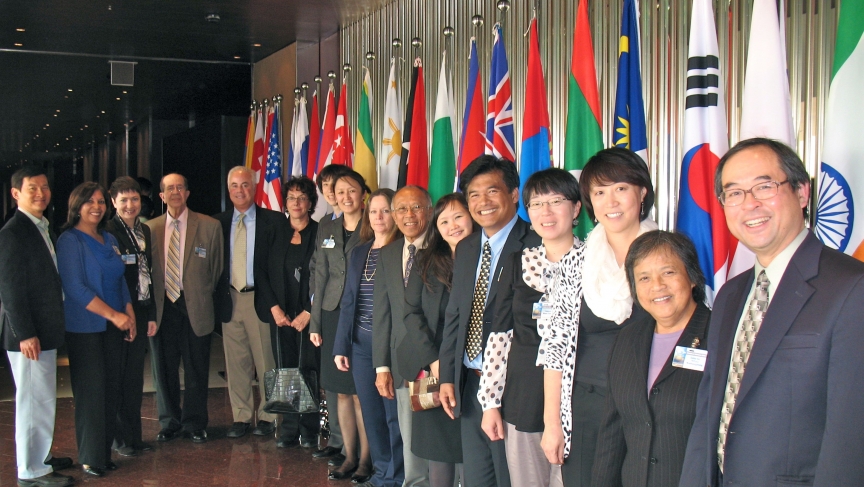 Antonio Guerra, Cetra's director of Interpreting Services, with his team of interpreters at the US Pacific Command's 13th annual Chiefs of Defense Conference in Seoul, South Korea

The US Pacific Command has canceled its 16th annual Chiefs of Defense Conference, scheduled for Oct. 21 to 24 in Honolulu — much to the chagrin of Cetra Language Solutions, a small foreign language services company that was contracted by the federal government to provide interpreters at the event.

“We are directly affected by the government shutdown,” says Cetra’s CEO and President Jiri Stejskal, who founded the Philadelphia-headquartered company in 1997 when he started getting so much work as a freelance translator, he couldn’t handle it by himself. He learned of the canceled conference last week, 13 days before the event was supposed to start.

“It was canceled last-minute,” Stejskal says. “The equipment has been shipped. We have about 25 interpreters who have flight tickets and everything. It’s just a total nightmare.”

The company is counting on the $141,000 federal contract, which is now a big question mark.

For the past several years, the language industry has been booming, due in large part to an uptick in federal contracts for defense and intelligence agencies after the 9/11 terrorist attacks. Globalization and the federal government’s recognition of an increasingly multilingual US society have also contributed to this growth. A Common Sense Advisory report found that federal spending on language contracts skyrocketed from nearly $14.9 million in 1990 to more than $1 billion in 2009.

But the continuing government shutdown has put foreign language companies like Cetra in a hard place. “It’s been a little bit of a downer, to put it bluntly,” says Thaddeus Thaler, director of federal services at Cetra.

Thaler has been working hard on the situation at Cetra’s northern Virginia office, trying to get reimbursed by the federal government. He says, luckily, Cetra’s contract with Pacific Command included a 100 percent refund policy if the conference was canceled within 14 days of starting.

“And the reason why we have a 100 percent cancellation policy at that point is to make sure our interpreters are paid for those days regardless of the situation, because it’s so difficult for them to go out and find new work,” Thaler says. “Otherwise they’re going to be out several hundred dollars — if not more — for those number of days that they missed.”

But even with that policy, it’s not yetclear that Cetra will get all of its money back or that the federal government will cover the cost of the interpreters’ fees. The Defense Department notified Cetra that the conference was canceled due to the shutdown, much to the surprise of Antonio Guerra, Cetra’s director of interpreting services.

This year would have been Guerra’s fourth time at the high-level conference, which brings together the chiefs of defense from 37 Asia Pacific countries on a yearly basis to promote cooperation and stability in the region. Guerra says that in the past, the conference has focused on issues like climate change, the economy and the political climate in certain countries, including terrorist factions in Indonesia, in addition to disasters like the Fukushima crisis.

In a somewhat cruel twist of irony, the very same day that Cetra got news of the canceled conference, an auditor from the General Services Administration came to the office to do a biannual audit, to ensure the company was reporting its sales properly.

“So he spent three or four hours in our office,” Stejskal says. “So that piece of government seems to be up and running happily.”

So far, the chiefs of defense conference is the only federal contract that has been canceled for Cetra. But the company is closely monitoring its other federal contracts. And even with the looming threat of a U.S. debt default, Cetra is in a better position than other foreign language companies that provide services only to the federal government. Federal contracts make up roughly a third of Cetra’s business, but Stejskal says he’s thinking of reducing that number in the future because of the shutdown — which was the last thing he expected to happen.

“We’ve been serving the federal government for close to 15 years now and even though it’s a difficult client, given all the bureaucracy and red tape, one of the reasons we’ve been doing it for the past 15 years is because we knew we would get paid,” Stejskal says. “And that’s changing now.”