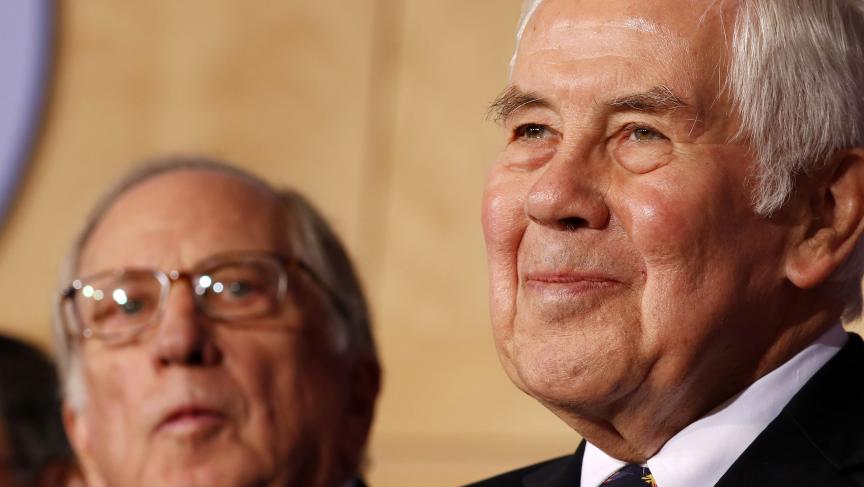 Former US Senator Richard Lugar, a Republican from Indiana who still spends time working on global issues of weapons proliferation, food safety and foreign aid, says fellow GOP members still in Congress don't grasp the magnitude of the uncertainty created by the conflict between Congress and the president.

The government shutdown and the looming deadline for raising the debt ceiling have rattled people around the world. Lugar said he's barred by law from communicating with members of Congress. Federal law requires former senators to wait two years after leaving office before becoming lobbyists. But he has talked with many colleagues overseas who are shaking their heads in disbelief at what is playing out in Washington.

Dick Lugar is from a bygone era. In terms of calendar years, it was not long ago when the veteran Republican senator from Indiana teamed up with a fellow Democratic colleague in the Senate named Barack Obama to work on nuclear non-proliferation. But that was 2005. And now, on even the most weighty issues of foreign policy and national security, the days of bi-partisan consensus in Washington feel like the relic of a political Jurassic period.

Lugar entered the US Senate in 1977 and served during the terms of six American presidents. He chaired the Senate Foreign Relations Committee. And he was defeated in the 2012 Republican primary by a Tea Party favorite whose campaign mocked Lugar for collaborating with the likes of Obama. Here is how one Tea Party activist explained the problem to The World's Jason Margolis outside of Indianapolis last year.

“You’re helping someone that doesn’t espouse the same views as we do. [Senator Lugar] would call that bipartisanship, and it’s not. It doesn’t work that way anymore,” said Greg Fettig, an Indiana Tea Party activist.

Margolis caught up with Lugar on the campaign trail in South Bend, and this is how he responded to the idea that Republicans should not be working with President Obama on foreign policy issues.

“I think it’s a very unreasonable suggestion, and as a matter of fact, not a very patriotic suggestion,” he said. “Each one of us had better be able to talk to everybody in our own country, other countries on behalf of our service personnel, of boots on the ground, on behalf of peace with people. If persons want to run for office indicating under no circumstances will they ever talk to a hostile president, or a hostile whoever, that’s their business. But that wouldn’t be a very exemplary service to Indiana or to the country.”

Some Republicans of Lugar's ilk refer to the Tea Party wing of the GOP as isolationists, hopelessly focused on taxes, government spending and the debt at the expense of pressing global concerns. When asked about that characterization by host Marco Werman, Senator Lugar wouldn't go quite that far. But Lugar said he disagreed with the priorities of some GOP members of Congress.