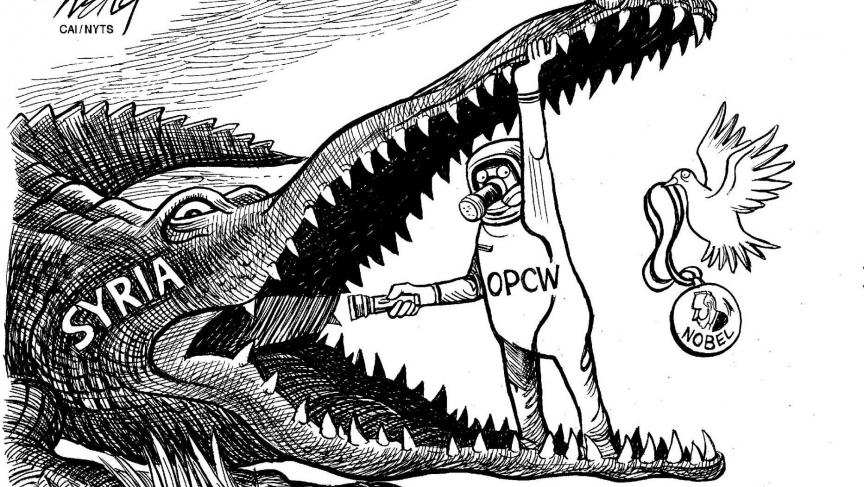 The mouth of this giant alligator looks like it could snap shut at any moment. And that's exactly the point of this cartoon by Heng Kim Song of Singapore. Heng is a master of the animal as metaphor and he lavishes special attention to the details of each creature he draws.

Are you, or have you ever been, an internationally-feared Somali pirate chief?

If so, here's something to note for the future: avoid documentary film-makers from Belgium. Al-Jazeera reports they may be setting a trap.

Who gets the $5 million prize for African leadership - no one

For the fourth time in five years, the committee that awards the $5 million Mo Ibrahim Prize has failed to find a worthy winner.

The criteria for victory?  It's supposed to be awarded each year to an elected leader who has governed well, raised living standards and then left office. The BBC has the story.

Was Yassir Arafat poisoned? There's evidence of it

Swiss scientists testing clothing and other personal belongings of Yasser Arafat have found traces of a radioactive substance, according to The Guardian.

The central Philippines were rocked by an earthquake Tuesday, killing at least 74 people, Reuters reports. Some of the dead were praying in a centuries-old church when the earthquake struck and the building collapsed.

China's opened its first RV park and, for at least some Chinese, it represents a chance at a different kind of like — at least for a weekend. According to The New York Times, RVs have only been widely available in China in the past three years, with some 10,000 rumbling down the roads.

African #migrants who don't make it across Mediterranean, face detention inside a Libya zoo. http://t.co/0XsoZs7pTK

Not to be a broken record, but there's another typhoon threatening Asia. This one is Typhoon Wipha, and it's southwest of Tokyo moving northeast. It's being called a once-in-a-decade storm and Reuters reports it's forced the battered Fukushima nuclear plant to take precautions. The storm is expected to hit Tokyo during Wednesday morning's rush hour.