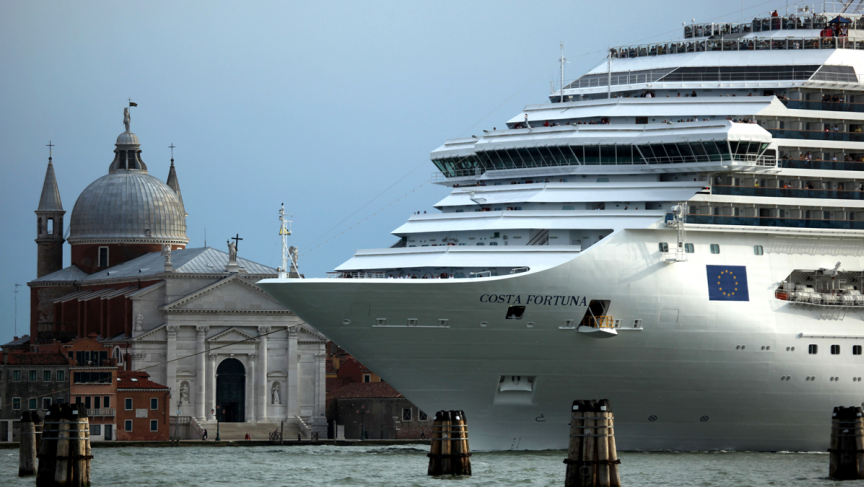 Nicolo Boccenti stands in his small motorboat docked near the Piazza San Marco and reaches out to help a small group of visitors come aboard. They've hired him to take them around Venice for the day.

But Boccenti isn't just a water taxi driver in Italy’s city of canals. He's also part of a group of Venetian activists who recently bobbed in the city’s signature lagoon wearing wetsuits and inflatable rings. They want to stop the mammoth cruise ships that pass through the fragile lagoon up to a dozen times a day.

As more and more luxury liners sail into the lagoon, a growing number of Venetians say they’re fed up. The towering ships are more than just a visual nuisance, they say; they put the foundations of the historic city at risk. It’s an especially sensitive issue after the grounding of the cruise ship Costa Concordia two years ago.

Boccenti explains that as the ships, which weigh more than 130,000 tons and tower 10 stories high, pass through the lagoon, they displace huge amounts of water, disturbing the delicate ecological balance the city depends on.

“They make waves that damage the city,” he says.

Italy adopted a law last year — after the Costa Concordia wreck — that bans boats of more than 40,000 tons from entering Venice's lagoon and other sensitive areas. But the law remains on hold in Venice as the city struggles to find a way to balance economic concerns with environmental ones.

Paolo Costa, the city’s Port Authority president, says Venice is the Mediterranean's most important "home port" — a place where cruise ships depart and arrive. And it's something the city's economy increasingly depends on.

“For us, being home port is very important,” Costa says, and not just because of the tourists on the ship. He describes a typical cruise liner as a “hamlet” of thousands of people.

“We supply them, and do all the maintenance on the ship,” he says. “And this is only because we are home port.”

Key to keeping that home port position, says Costa, is that tourists get what he calls "the aesthetic privilege" to gaze upon the beautiful Piazza San Marco from the deck of their ship.

Costa says the city is looking at an alternative route for the luxury liners, one that would involve digging into another canal to make it deep enough for the massive ships. But that poses two major problems: a $120 million cost that no one seems ready to pay, and public opposition to excavating and disrupting the ecosystem of another canal.

“These kind of big ships are a danger for the city but good for the economy of the city, the coffee shops, everything,” said Massimo Milanese, who manages a café in Piazza San Marco.

Like many Venetians, Milanese recognizes the importance of the cruise ships to the city, but says the Venetian and Italian governments need to come up with a plan before the lagoon is ruined.

“Like everything in Italy,” he says, “it's a lot of discussion. But this problem is urgent for Venice.”

Meanwhile, the ships that are staying afloat, while Venice is sinking.