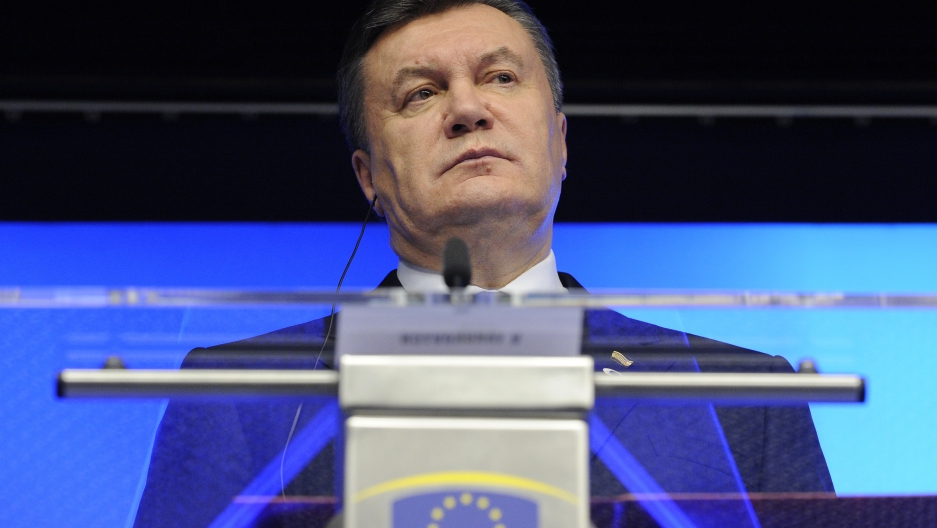 Made his choice? Yanukovych at an EU-Ukraine summit in Brussels this year.
Credit: John Thys
Share

This is the third of a five-part series looking at the issues facing Ukraine and Moldova as they prepare to sign major agreements with the EU next month.

KYIV, Ukraine — His critics accuse him of jailing opponents, cracking down on press freedom and concentrating wealth and power in the hands of a few allies.

He has surprised observers in recent months by reaffirming his commitment to sign landmark agreements with the European Union next month that would pull his country further into Europe while fending off aggressive advances from Russia.

That doesn’t mean his autocratic tendencies have vanished, however.

The EU has hinted that the release of former Prime Minister Yulia Tymoshenko — the Orange heroine imprisoned in 2011 for what critics say was political payback from Yanukovych — is the chief precondition for signing the association and free trade agreements.

European negotiators appear to have brokered a deal that would free her if she leaves the country, something she’s publicly accepted.

But in public at least, Yanukovych hasn’t budged, casting doubt on whether Brussels will keep its offer on the table.

“We need to find a way out of this situation that would still allow us to sign the agreements,” said Andriy Shevchenko, a lawmaker from Tymoshenko’s Fatherland opposition party and a parliamentary representative to the Council of Europe.

Even if she’s released, the Tymoshenko affair represents only the tip of the iceberg in a country where the climate for transparency and fair competition in politics continues to worsen.

Yanukovych’s administration has prompted criticism from detractors at home and abroad for rigging elections and manipulating parliament to push through laws favorable to his regime.

Most recently, critics have accused him of preparing to fix his own re-election in 2015 after a staunch loyalist from Yanukovych’s hometown in eastern Ukraine was elected to head the Constitutional Court, a key position that could help decide presidential elections.

That’s probably not what Europe had in mind when it launched its ambitious Eastern Partnership program in 2009 during the waning pro-Western tenure of Orange-era President Viktor Yushchenko.

“The main values in the contemporary world are the individual, his freedoms and the rule of law, but those things are absent in Ukraine today,” boxing champion and opposition leader Vitali Klitschko said in a July interview.

Nevertheless, the EU has persisted in courting Yanukovych despite his less-than-European credentials.

Such positive signals should provide hope for Ukraine’s oligarchs, who control most of the country’s top industries and have helped prop up the president.

Analysts say those gray cardinals want access to more lucrative and transparent European markets, where they face far less competition from their well-connected Russian counterparts than they would in a Moscow-dominated customs union, which the Kremlin is pushing as an alternative.

Denis Denisov, head of the Kyiv branch of the Kremlin-funded Institute for CIS Countries, says their preferences have largely dictated Yanukovych’s shift away from Moscow.

“Of course the political and economic elite in Ukraine are worried about the Russians swooping in and taking everything away,” he says.

But there are reasons to believe Yanukovych may be less reliant on his oligarchs than in the past. Observers say that’s because he’s gradually siphoned key economic assets into the hands of what’s become his so-called family.

It includes his son, Oleksandr, whose worth is believed to exceed $200 million, and Serhiy Kurchenko, a 28-year-old millionaire who was virtually unknown inside the country until he snapped up lucrative natural resource assets, one of Ukraine’s top soccer teams and a media holding company.

Yanukovych has also appointed loyalists to key political positions in the Finance Ministry, the National Bank and elsewhere.

Serhiy Leshchenko, a leading investigative journalist, describes it as a “Russian” or “Asian” model of politics, similar to former Russian President Boris Yeltsin’s “Family” or the heavily centralized dictatorships of Central Asia.

“These are people that basically came out of nowhere,” says Leshchenko, who investigates government corruption as deputy editor of Ukrayinska Pravda, an independent online outlet. “They were appointed without any background in their fields and are weak, but loyal to the president’s family.”

Such developments aren’t lost on most ordinary Ukrainians, who appear to have given up on their political leaders. Many are still struggling in a stagnant economy whose currency hasn’t recovered from a crippling 40 percent devaluation that followed the 2008 global financial crisis.

It’s why people like 56-year-old Tatyana remain cynical about the real prospects for Ukraine’s European integration. A former banker, she says she was forced to open a beer stand in central Kyiv after her bank went under thanks to poor financial performance.

“What integration?” she said angrily, sorting beer cans and bags of chips in her tent. She asked that only her first name be used. “No one needs us with all these problems.”

Still, Shevchenko, the pro-Tymoshenko lawmaker, says he’s confident that Ukraine will satisfy the EU’s other key conditions for concluding the association and free trade agreements in November.

They include reforming the electoral system, which critics say currently tips the balance in favor of the ruling Regions Party as well as the Prosecutor General’s office. The EU rapporteurs are set to deliver their report on Ukraine’s progress on Tuesday.

“Presidents come and go,” Shevchenko said. “But Ukraine’s European choice is for generations to come.”

A previous version of this article refered to Andriy Shevchenko, a lawmaker from Yulia Tymoshenko’s Fatherland party, as Oleksandr Shevchenko. The error has since been corrected.