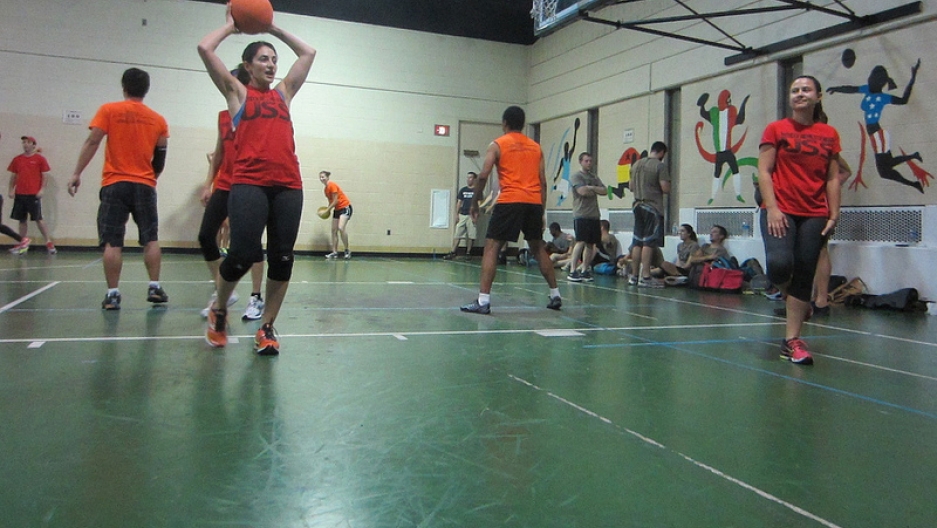 For many, dodgeball evokes memories of getting hit in the face with a red rubber ball on the playground. But that's not what comes to mind for Paniz Asgari. When the Iranian-American thinks about dodgeball, she thinks strategy, training – and world championships.

The US Women's National Dodgeball Team recently chose the 29-year-old for its 2013 roster. At the end of September, Asgari and her teammates headed to New Zealand for the World Dodgeball Invitational. Yep, Asgari flew halfway around the world to play dodgeball. For her country.

That all might seem a little silly. Asgari says she will convince you that it is not.

"I'm not offended that some people might think dodgeball is silly," she says. "But get on the court. Come play with me and we'll see if you end up thinking it's still silly."

After a session of dodgeball tips and tricks at the Georgetown University Law Center, Asgari proves she is definitely no slouch on the dodgeball court. In her regular league play, she is often the last person standing on her team. But she's sort of predestined to be good. Dodgeball is in her blood.

Asgari was born in Tehran and moved to the U.S. with her family when she was two and a half. Apparently, Persians love dodgeball. Their version of the game is called vasati.

"The Persian version of dodgeball is where you have one team in the middle almost like Monkey in the Middle. But instead of throwing the ball over so you can't get it, they try to hit you," she explains. "So the second team is split on either side of you and they throw the ball back and forth. And you just keep playing until they get everyone out."

Vasati is still popular in the Persian ex-pat community. Asgari remembers playing all the time when she was growing up in Northern Virginia.

"Picnics, barbecues, everybody plays. Every chance I ever got, I played dodgeball with friends, family at those picnics," she says. "I'm coming into this with an unfair advantage."

Asgari's parents fled Iran during the height of the Iran-Iraq war. They never could have guessed that their sacrifice would lead to this. In Iran, her father was an architect. Her mother was a nurse. When they left their lives in Tehran and landed in the U.S., they had to start over.

Asgari's mother got a job handing out YellowPages for five cents a book. Her father found work driving a taxi.

"My parents were upper-middle class, educated Iranians, and they left everything," Asgari says. "I am forever grateful for their sacrifice... to give up everything they ever knew to make my life absolutely amazing."

"From my parent's experience, my takeaway was never be lazy, never take anything for granted," she says. And that's what she brings to her game.