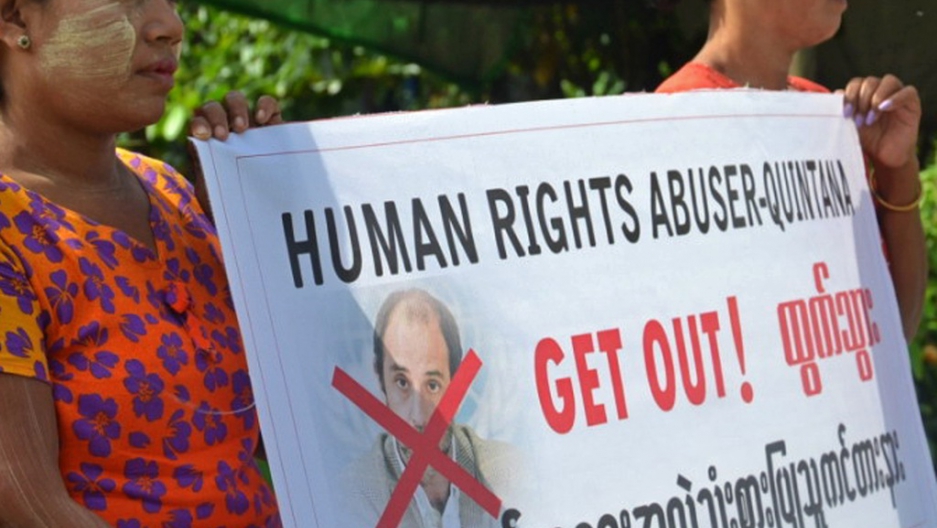 Ethnic Rakhine Buddhist villagers protest the visit of UN Human Right Rapporteur on Rights in Myanmar Tomas Ojea Quintana, in August, 2013. The United Nations has called for dialogue after another violent clash in a camp for dispossessed Rohingya Muslims in western Myanmar.
Credit: STR
Share

As in parts of Europe — such as The Netherlands and France — Myanmar’s riled-up patriots warn of a population time bomb: A demographic explosion of Muslims 'breeding' them into oblivion.

The Muslims in question are known as Rohingya, beleaguered ethnic Bengalis without citizenship who have long inhabited the borderlands near Bangladesh. Their detractors call them “parasites.” Certain cities enforce a two-child limit on their women and government reports insist their “rapid population growth” has provoked Buddhists into torching their homes and taking their lives.

There’s a glaring problem, however, with this widely held belief of a menacing Muslim population boom. According to a new study, authored by Harvard University researchers, it appears to defy both data and logic.

“The people who make these assertions are repeating what they’ve heard, not necessarily what’s true,” said David Dapice, a Southeast Asia-focused economist with Harvard’s Ash Center for Democratic Governance and Innovation. “It becomes an accepted trope like President Reagan’s ‘welfare mother’ driving a Cadillac.”

Mob violence and arson sprees targeting Muslim quarters have become depressingly common in Myanmar, a Buddhist majority nation still emerging from decades of totalitarian military rule. So far this year, at least five major riots in various corners of the country have left thousands displaced, dozens dead and scores of shops and homes reduced to embers.

But no region in Myanmar is as riven by religious violence as Rakhine State, an oblong coastal stretch that fronts the Indian Ocean and abuts Muslim-majority Bangladesh. For centuries, this has been the terrain where South Asian Islam’s primacy gives way to Buddhism’s reign across most of mainland Southeast Asia. The region’s major historical city, Mrauk U, was once a trading empire rivaling Amsterdam; its rulers practiced Buddhism but used grandiose Islamic titles.

But the two faiths do not always coexist peacefully. Recent events signal the beginning of a dark and worrisome chapter.

Broadly speaking, Rohingya are often darker skinned than their Buddhist neighbors and less apt to speak the nation’s lingua franca, Burmese. They speak a dialect of the Bengali language readily understood in Chittagong, Bangladesh’s major seaport.

Though Rohingya scholars contend their presence dates back centuries, British colonialists triggered a mass influx when they ruled all of modern-day India, Bangladesh and Myanmar and erased historical borders. Starting in the early 19th century, waves of Bengali Muslims were guided to Myanmar, then called Burma, to toil fields or serve as second-tier bureaucrats.

This bloodshed plays out to a backdrop of seething anti-Muslim rhetoric. The worst screeds would not seem out of place in the manifesto of Anders Breivik, the Norwegian mass murderer convinced Europe is being systematically overrun by Muslims.

A politician named Shwe Maung told The Economist that “they are trying to Islamize us through their terrible birth rate.” Rakhine State government spokesman Win Myaing has claimed to India’s The Hindu that the Rohingya population growth is ten times that of native Buddhists. Extremist monk Wirathu, the best-known face of Myanmar’s swelling anti-Muslim movement, told GlobalPost that “Muslims are like the African carp. They breed quickly and they are very violent. They eat their own kind.”

But two common anti-Rohingya refrains — they’re invading en masse from Bangladesh and they’re having an unusually high number of kids — have been deemed baseless by Dapice and his colleague, Nguyen Xuan Thanh.

“Looking at all these relatively reliable sources ... you find there’s no evidence at all of an increasing traction of Muslim people,” Dapice said. “In fact, it’s quite the opposite. There’s been a net outflow after 1950.”

Quality data is scarce in Myanmar, long ruled by a reclusive and dysfunctional government. Even the country’s true population is a mystery; estimates range between 55 and 70 million.

Dapice and his team crunched the best available government data along with other indicators such as electricity supply, water usage and more.

Nationwide, Myanmar is roughly 4 percent Muslim; in comparison, its population is a little less Muslim than Germany’s and half as Muslim as the French citizenry. In seaside Rakhine State, however, Muslims are far more plentiful. But all evidence suggests the percentage of Rohingya in Rakhine stands around 20 percent, a figure little changed from the 1950s, according to the study.

It is widely believed in Myanmar that the Rohingya ethnicity is an invention whipped up by people from Bangladesh seeking an illegitimate claim to greener pastures in Myanmar. “The vast majority of inhabitants of famine-stricken [Bangladesh] were wretched poor who found havens in the sparsely populated and relatively bountiful land across its eastern border,” wrote Maung Tha Hla, a veteran of Myanmar’s foreign service, in a book titled "Rohingya Hoax."

But there is a major flaw in this argument, too: Rakhine State is far more destitute than Bangladesh.

As Dapice notes in his study, the region’s child malnutrition rate is at 87 percent, more than double that of Bangladesh. Access to safe drinking water stands at roughly 40 percent, half that of Bangladesh. Landlessness is pervasive, which suggests there is no “bountiful land” to settle upon. And, according to the study, the average Bangladeshi would take a 30 percent pay cut by crossing the border to receive an average Myanmar income.

“My basic argument is that water does not run uphill,” Dapice said. “People go from where it’s poorer to where it’s richer and not the other way around. That would be very, very unusual.”

He is also dubious of accusations of out-of-control birthrates among Rohingya women. Rakhine State — home to roughly 800,000 Rohingya Muslims, according to the United Nations — has one of Myanmar’s lowest population growth rates. The region’s overall population is estimated at 3.3 million.

Rohingya fertility rates may exceed the national average — two kids over the course of the average Myanmar woman’s lifetime — but this is likely owed to poverty, Dapice said.

“When you’re in a poorer situation,” he said, “the only thing you can do is have more children to take care of you when you’re old.” He dismisses religion as a factor by noting that the fertility rates in Myanmar’s Muslim-majority neighbors, Bangladesh and Malaysia, are similar.

“This has become so emotional and politicized that I don’t think abstract arguments will carry the day,” he said. “We need more evidence. We need a government survey to look at the number of Muslims and say, OK, this is how many we counted.” The first government census since the early 1980s is planned for 2014.

The nation’s current laws essentially seek to dial back time and invalidate citizenship for any ethnic group determined to have arrived after (or because of) British invasion. Authorities and civic-minded dissidents alike typically disregard the word “Rohingya” and instead call them “Bengalis.”

Even a senior-ranking member from the party of Aung San Suu Kyi, the nation’s famed Nobel Peace Laureate, told GlobalPost that “there is no Rohingya ethnic group. It is a made up name of the Bengali.” But Bangladesh has adamantly refused to offer a home to the Rohingya. Its troops have forcibly pushed back refugees fleeing violent mobs.

There is now a broad consensus among Myanmar observers that sectarian anti-Muslim violence has emerged as among the biggest threats to Myanmar’s long-awaited ascent from poverty and oppressive rule.

“If Myanmar gets this wrong then everybody will lose out: a violent, unstable and bigoted country is a place that no one wants to visit or invest in,” wrote the International Crisis Group’s Asia director, Jim Della-Giacoma, in an op-ed last week.

“My concern, frankly, is that after Syria and a few other places calm down, the next place on the jihadists’ list will be Myanmar,” Dapice said. “All because of these outrages. Then you’d start getting explosions along pipelines and in tourist spots. That’s the last thing they need.”