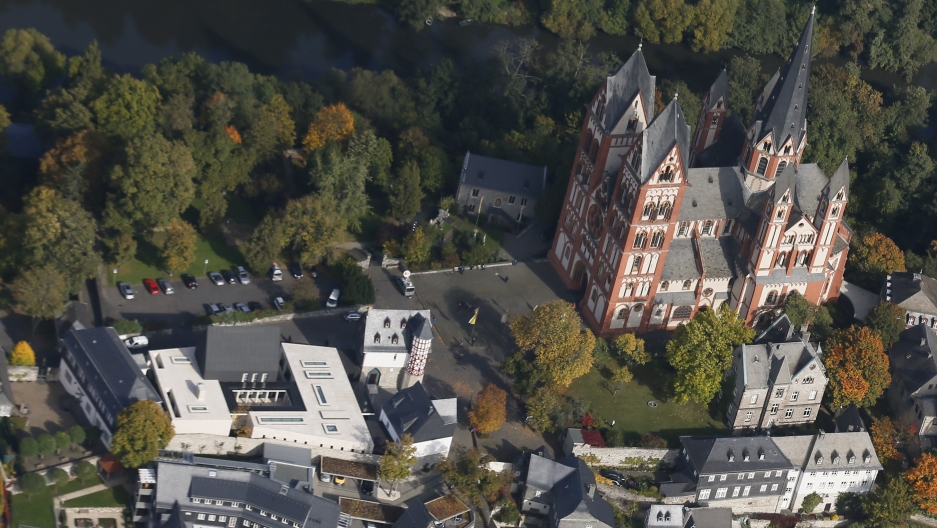 Limburg cathedral (R) and the ensemble of the bishop's residence (L), where German Catholic bishop Franz-Peter Tebartz-van Elst has spent tens of millions of dollars on his residence.

Just when a new Pope starts to improve the image of the Catholic Church, another public relations scandal hits. This time, it's over a German bishop who is accused of living a lavish lifestyle and spending a gross amount of money on a new residence.

Bishop Franz-Peter Tebartz-van Elst, 53, spent more than $42 million to renovate his residence in the town of Limburg, Germany, near Frankfurt. The bishop was one of the youngest bishops in the German church when he was appointed in 2003.

"How he was able to spend $42 million is a good question," said religion reporter Jane Little. "It's many times the price tag he claimed and unfortunately for him, the architect [of the project] said the bishop always [knew] the true cost of the project and that there were no surprises."

"Now contrast this with Pope Francis," said Little, "who's eschewed the papal palace at the Vatican in favor of an austere guest house."  He's adopted simple robes and he plans to drive himself around Vatican City. He's quickly restyling the papacy and restructuring the church hierachy for a simplier life serving the poor, added Little.

Tebartz-van Elst has now traveled to Rome to meet with church officials at the Vatican and will likely appear before the head of the congregation for Bishops, according to Little.

"He's likely to get a dressing down," she predicted. "He will be asked under no uncertain terms to resign and that the Pope will accept his resignation."

As if this scandal wasn't enough, she said, Tebartz-van Elst is also being charged with "making false statements during legal action he took against the weekly news magazine, Der Spiegel, which reported last year that he flew first class on a trip to India, which was a trip to visit Nepal."

"He disputes that and says he flew business class," said Little.

And, she added, this scandal is not going down well in Germany, where many catholics have been leaving the church in recent years "over the clerical sex scandals. So this latest story is not helping the church's reputation."

Little said that one German paper ran a piece headlined, "For Heaven Sake," asking why the bishop needed 784,000 euros (over $1 million) for a garden.