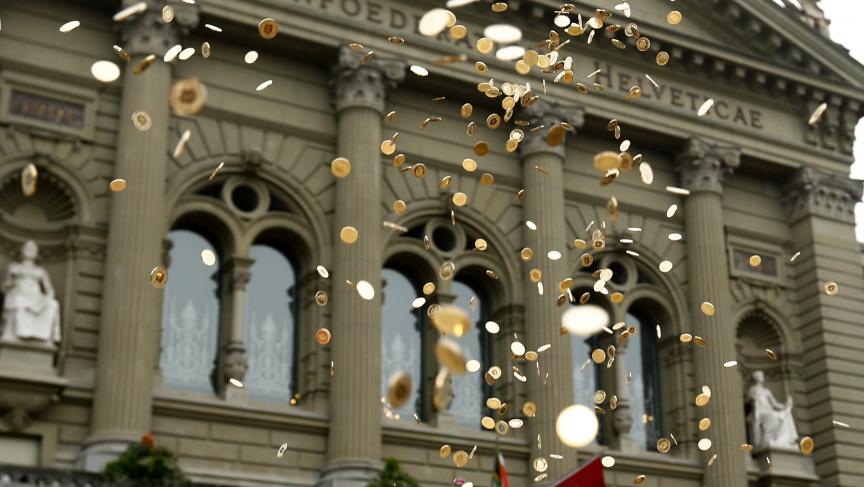 Five cent coins are pictured in the air in front of the Federal Palace in Bern, Switzerland, during an event organized by the committee proposing a minimum monthly household income of 2,500 Swiss francs for every adult citizen living in Switzerland.

Here's a deal: Each month the Swiss government will send every adult a check for about 2,500 swiss francs (roughly $2,750) — no matter their need or income.

At least, that's the proposal before the Swiss people.

In response to growing economic inequality, a grassroots movement in Switzerland collected the 100,000 signatures needed to secure a national referendum on their basic income proposal. Swiss law states any petition that receives at least 100,000 signatures will be voted on nationally.

"It is not as kooky as it sounds," says Karl Widerquist, a Georgetown University professor who has researched basic income policy for a decade. "It's the idea of putting a floor under people's income, the idea that income doesn't have to start at zero."

Basic income is a social security system in which the government regularly gives each citizen a sum of money — with no conditions.

Widerquist points to one example of a similar system here in the United States. With Alaska's Permanent Fund Dividend, the government divides up some of the state's yearly oil revenue and gives a portion to each resident. The amount fluctuates year to year, from a few hundred dollars to a few thousand.

But the proposed measure in Switzerland would be much greater, adding up to more than $30,000 in guaranteed annual income for each adult.

"A basic income, in a way, frees you to improve your skills and your efforts and do something that actually makes a bigger contribution to economy," he says.

No date has been set for the national referendum on Switzerland's guaranteed income proposal.