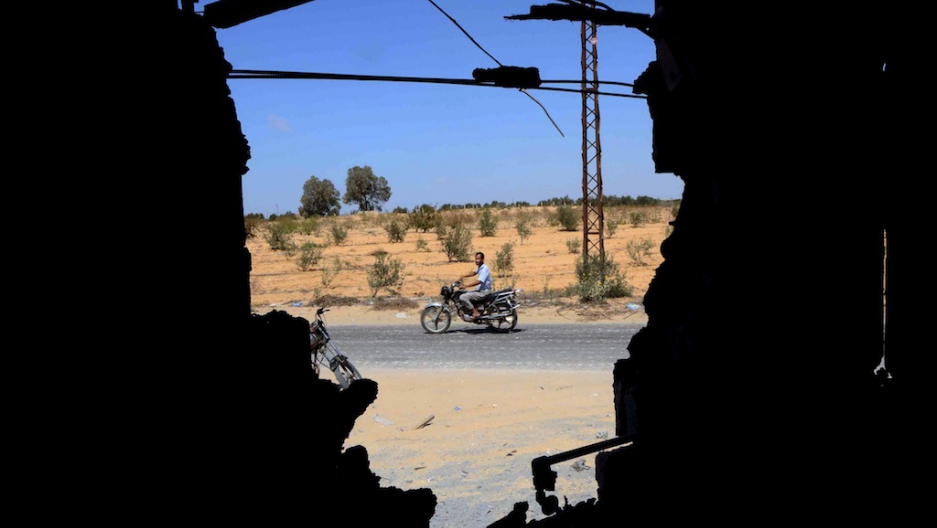 A man is seen riding a motorbike through a wall that was destroyed by the Egyptian Army the day before in a village on the outskirt of the Northern Sinai town of Sheik Zuweid on Sept. 10, 2013.
Credit: Mohamed El-Shahed
Share

CAIRO, Egypt — The current political crisis in Egypt isn't news to many. But often overlooked is the central state's frayed relationship with the Sinai Peninsula, where militancy has taken deep root and Egyptian authorities are now waging what they call a "war on terrorism."

Anxious about an Al Qaeda-backed insurgency in the Sinai growing more active by the day, the Obama administration will keep funding Egyptian army operations there, although the US is suspending much of the rest of its military aid to Egypt.

But will Egypt's fresh war in the region near the Israeli border be enough to control extremism fostered by years of neglect? Cairo-based correspondent Louisa Loveluck explains why fighting terror on the tiny peninsula matters to the region and the world.

What does the struggle in the Sinai Peninsula have to do with the rest of Egypt's unrest?

North Sinai is home to a number of jihadist groups, some Al Qaeda affiliated, which are mounting daily attacks on soldiers and police. Although their activities have largely been concentrated in the peninsula, they have also been operating in Cairo. On Sept. 5, a suicide car bomb targeted Interior Minister Mohamed Ibrahim. Although he escaped unharmed, one person was killed and a further 21 were injured. Militants also attacked a giant satellite dish in Cairo's upscale district of Maadi last week, allegedly using rocket-propelled grenades. Vital trade routes, including the Suez Canal, have been targeted as well. The attacks escalated following the July 3 military coup that sent the country's first freely elected president, Mohamed Morsi, into incommunicado detention. They have taken on a greater urgency over the past week, against the backdrop of a deepening crackdown against supporters of the former president, himself an Islamist, and other dissenters in the country.

Egypt's military-backed authorities have responded with what they call a "war on terrorism." They are now conducting a military campaign in the northern part of the Sinai Peninsula in an attempt to root out militants. My own visit to the area showed that the army's campaign is causing a great deal of damage to homes belonging to people who say they have nothing to do with the militants. At this stage, a major concern is that the army's campaign will alienate North Sinai's already isolated tribal community even further from the central state, producing a more permissive atmosphere in which militants are allowed to operate, and ensuring that the cycle of violence continues.

Why is North Sinai such a hotbed of insurgency?

The situation in Sinai is a product both of recent political events and of the area's longstanding neglect by the central state. Its immediate roots date back to the January 2011 uprising, when the collapse of dictator Hosni Mubarak's security apparatus caused a security vacuum to emerge across the peninsula. A 1979 peace treaty between Egypt and Israel places severe restrictions on military deployments in the Sinai, leaving the interior ministry to fill the security gap. But once the police withdrew, the region fell out of central government control and militants were able to establish a foothold without being challenged.

In this security vacuum, the underground tunnel trade between Egypt and neighboring Gaza thrived. Although these tunnels are often used to transport vital fuel and humanitarian supplies through to Gaza, they are also a conduit for weapons smuggling. Sinai's militants have profited from this.

But Sinai's status as an incubator of extremism has deeper roots that should not be overlooked. Infrastructure in the region is poorly developed, employment opportunities are scarce and locals receive very few services. They say that their encounters with Egypt's authorities have almost always included repression or mistrust, based largely on their status as a community apart from the rest of the country. This has made them feel increasingly isolated and unwilling to join in the current fight against the militants, many of whom live within their communities.

Government neglect was also what allowed Sinai's illicit economy — mainly operating through the underground tunnels — to flourish. In the absence of employment opportunities, locals have created their own. The area is actually now wealthier than several other governorates in Egypt, despite its isolation, but its economy is being destroyed as the army targets the tunnels.

How do other states — Israel and the US in particular — feel about the current unrest in the Sinai? Are they taking steps to get involved with Egyptian forces there, in spite of the US holding back some of its military aid?

Although the US is suspending a substantial chunk of its military aid to Egypt, it has promised to continue funding army ops in the Sinai, as well as counterterrorism programs. The Obama administration will view the task of rooting out an Al Qaeda linked insurgency with some urgency, seeing it as a threat to both Egyptian and global security.

Israel has remained largely silent throughout the mounting security crisis, at least in public. Israeli Prime Minister Benjamin Netanyahu's government will no doubt be concerned at the rising threat of militancy on its borders. The Egyptian and Israeli armies are reported to be in ongoing consultations about Egypt's military operation in Sinai.

In neighboring Gaza, relations between its Hamas ruling party and Egypt have soured since the military operation began. Egypt's destruction of around 80 percent of the smuggling tunnels to Gaza has cost Hamas an estimated $250 million in lost revenue. It has also ruptured a vital humanitarian lifeline for Gaza's 1.7 million people, prompting fuel shortages and putting Palestinian families under increased stress as food prices start to rise.