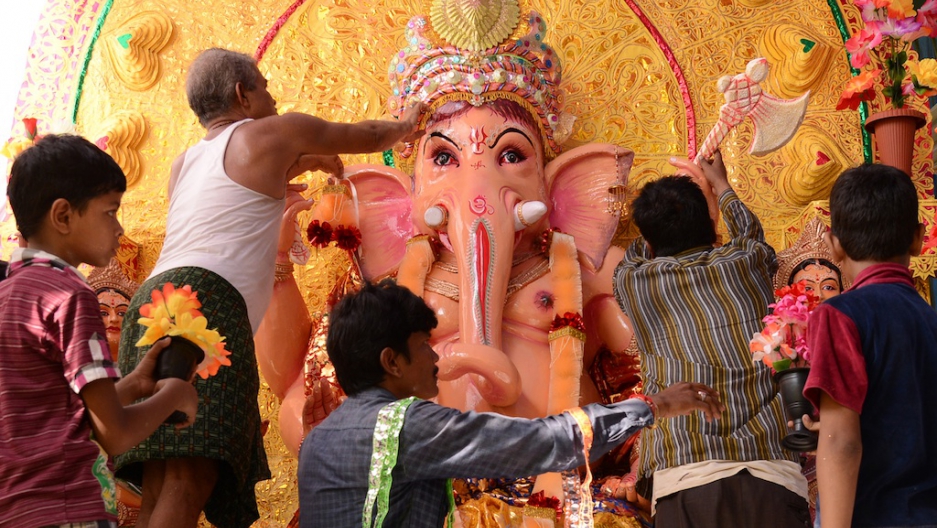 Indian devotees decorate a statue of the Hindu god Lord Ganesh on the eve of the Ganesh Chaturthi festival at a temple in Amritsar in northwestern India on Sept. 8, 2013.
Share

A stampede on a bridge in central India on Sunday left at least 115 people dead and more than 100 injured, with the death toll likely to rise, according to local officials.

The victims included at least 30 children, the Times of India reported.

"The toll could touch 120. We are yet to recover bodies from the river," General D.K. Arya, deputy police inspector of the town of Datia in Madhya Pradesh state, told the newspaper.

It was not immediately clear what caused thousands of people to suddenly stampede on the bridge, but BBC News said it may have been rumored that it was unsound.

Arya told AFP people thought the bridge had been hit by a big vehicle, sparking panic.

Most of the victims were killed in the stampede itself, but there were also reports of people jumping off the bridge and drowning in the Sindh river below, said CNN.

The pilgrims were headed to the nearby Ratangarh Hindu temple for the Navaratri festival, which honors the Hindu god Durga, according to Al Jazeera.

The bridge was the site of a similar stampede in 2006, when at least 50 were killed.

Every year, millions of pilgrims stream to temples throughout India for the occasion.

Hundreds have died in similar crowd-induced tragedies during Hindu festivals in India over the past several years, said the BBC.