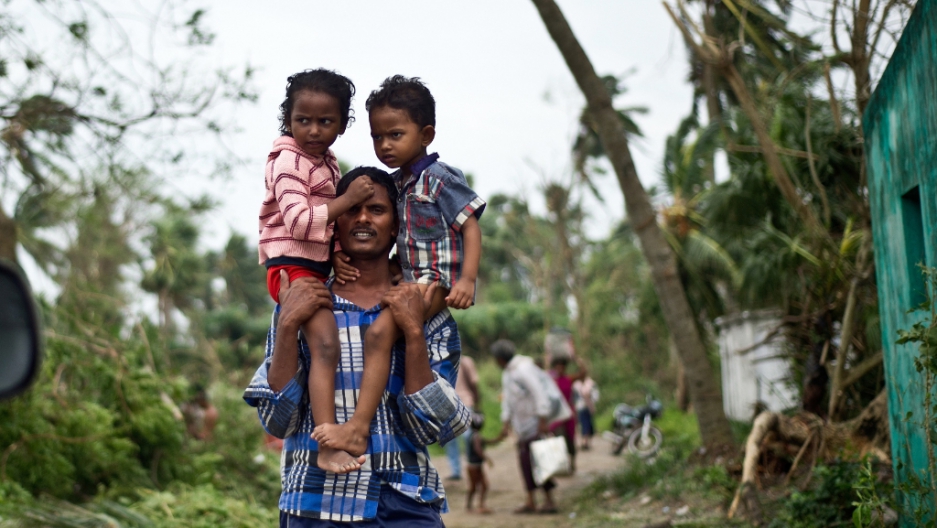 A displaced Indian man carries his children at Sonupur village around 15 kms from Gopalpur on October 13, 2013. Cyclone Phailin left a trail of destruction along India's east coast and up to seven people dead after the biggest evacuation in the country's history helped minimise casualties.
Credit: MANAN VATSYAYANA
Share

Leaving untold damage in its wake, Cyclone Phailin plowed through India on Saturday, killing 14 people and forcing as many as one million people from their homes, according to CNN.

The storm has reportedly lessened slightly as it headed northwest on Sunday, reported BBC News.

CNN on Sunday said it had become a Category 1 hurricane — hurricanes are called cyclones in the Indian Ocean — dropping down from a Category 4.

It was at that strength, packing 140-mile-an-hour winds, that the cyclone made landfall Saturday in Odisha state.

"We have been able to... (keep) the death toll to a bare minimum," vice chairman of the National Disaster Management Authority Marri Shashidhar Reddy told reporters in New Delhi, AFP said.

The worst storm to strike India in 14 years, Phailin tore through coastal homes in India's southern Odisha and Andhra Pradesh states on Saturday.

"The Panama-registered cargo ship MV Bingo is feared sunk as the crew was sighted on a lifeboat yesterday east of Sagar, 25km from the coast,"  Kolkata Port Trust head Kahlon said on Sunday, reported the Times.

Disaster relied officials and residents on Sunday worked to clear roads and assess the damage.

Watch India's NDTV report from Ganjam, the area hardest-hit by the storm, here: