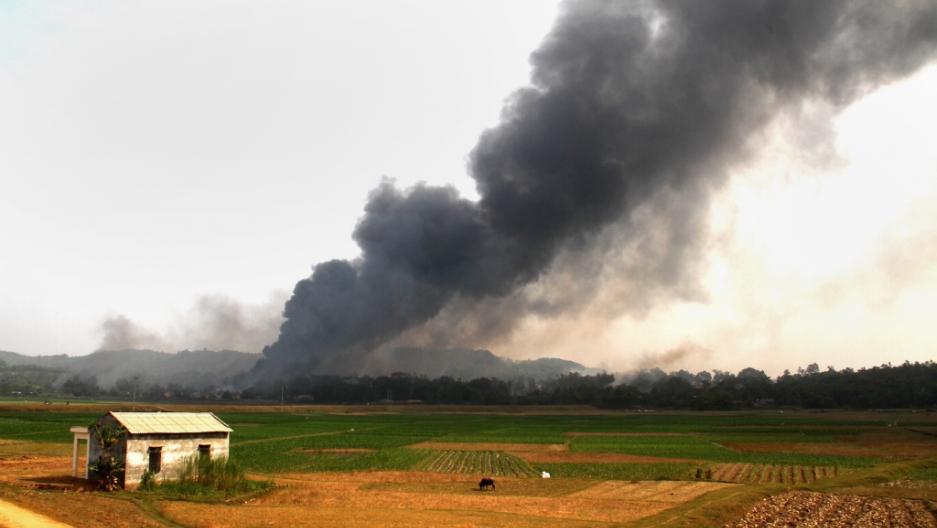 A blast at a fireworks factory in Vietnam early Saturday reportedly killed at least 21 people and sent rockets of fire shooting out of the building for hours afterwards, according to Agence-France Press.

"Twenty-one people are dead and 98 others are injured -- most of them have sustained burns," a rescue official told AFP by phone on the condition of anonymity because of the heightened death toll. BBC News said at least 12 people had been killed.

Several thousand people were evacuated following the explosion at the factory, which was located in a Thanh Ba military compound about 80 miles north of Hanoi, according to Britain's SKY News.

About 300 people were said to work at the factory, the majority of them women. Burn victims were reportedly being taken to a special treatment center near the capital.

Phi Xuan Trung, head of the local Khai Xuan commune, told local press the "first blast was at 7.55am — and then there were continuous explosions for some hours," reported SKY News.

The explosions sparked a fire that authorities worked quickly to contain so it would not spread to nearby warehouses holding explosives, officials said.

Locals in Thanh Ba told AFP the explosions felt like an earthquake.

"After the first explosion, my house was shaking and the door smashed open," Nguyen Nhu Quynh, who witnessed the blast, told the local VNExpress, said AFP.

It was not immediately clear what caused the explosions, and the incident is under investigation.

The factory is Vietnam's only producer of the fireworks needed for the nation's grand Lunar New Year celebrations and other major festivities, said SKY News.

Amateur footage allegedly taken at the scene of blast shows smoke billowing out of the building. Watch it here: