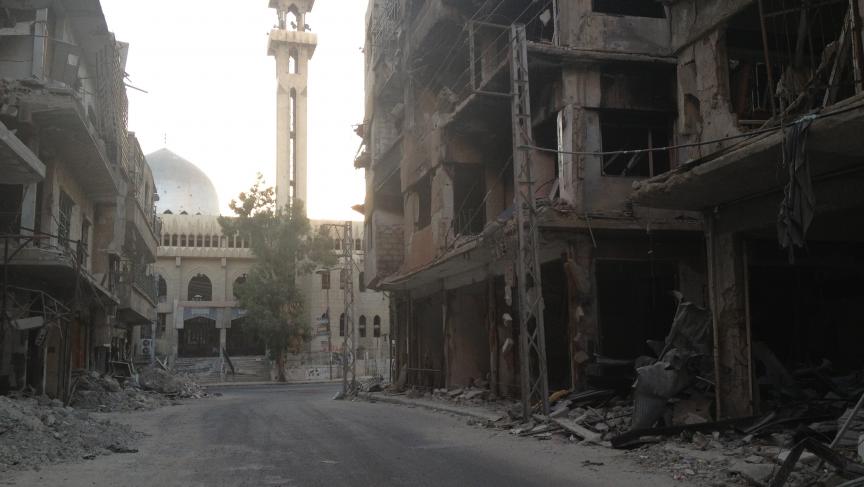 Even before the chemical attack, the Zamalka neighborhood of Damascus suffered government bombardment.

The chemical weapons inspectors now working in Syria say things are going pretty well, the government of Bashar al-Assad is doing what it's supposed to.

Ahmet Uzumcu, the director of the Organisation for the Prohibition of Chemical Weapons, the UN agency charged with overseeing the destruction of Syria's chemical weapons, called the cooperation "constructive".

"I would say that the Syrian authorities have been cooperative. They have started to contribute to a trust fund that we have established, and I welcome all this," he said.

But that’s cold comfort to residents here in the Damascus neighborhood of Zamalka, where there are endless blocks of fallen concrete and twisted metal, buildings that are sliced in half and remnants of lives that used to be: A washing machine. The headboard of a king size bed. Pieces of a toilet.

People here say what the weapons inspectors do or don’t do matters little to them.

Sixteen-year-old Mohammad al Zeiba walks through the rubble. He lost his entire family the night of the chemical attack. Among them: His mother and father. His five brothers and sisters. Two aunts. Two uncles. All of their children.

After the sarin gas rockets struck, which everyone here blames on the government, Mohammad says he and a friend tended to dozens of the injured.

Now, there are major food and medicine shortages in Zamalka. Government checkpoints prevent even bread from coming in, and most residents can’t leave the besieged area because government troops would detain them for being rebels or rebel sympathizers.

So people here ask: 'If the UN can get Assad to give up his chemical weapons, then why not pressure him to stop starving us?'

Abdul Naser Shumeir is the head of the rebel military council in Zamalka.

"So it’s going to take 9 months to hand over the chemical weapons. But no one is talking about how these nine months will be continuous suffering for Syrians about to face the winter, or that 3 million refugees are still outside Syria, or how most rebel-held areas are under siege, or the serious shortages of food and medicine," Shumeir says. "They’re just talking about the chemical weapons, not about the 10 or 15 million Syrians who are suffering.

In the evenings, men generally hang out together in someone’s home.

You can hear gunfire from the frontline, barely a five-minute drive away. The men are silent. They check their computers for the latest news from rebel brigades.

They listen to favorite songs — about war, about mothers of fallen soldiers.