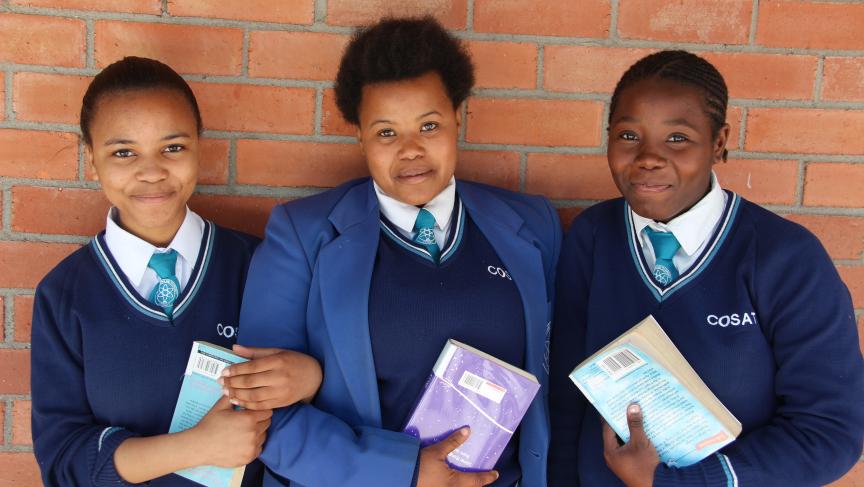 Olwethu, Sesihle, and Lusanda, from left, are students at the Centre of Science and Technology, a high school in Cape Town, South Africa.

Malala Yousafzai, the 16-year-old advocate for girls’ education in Pakistan who was shot last year by the Taliban, was considered a front-runner for this year’s Nobel Peace Prize, at least in some circles.

The Norwegian Nobel Committee announced its selection Friday morning and it wasn't Malala. (The prize went to the Organization for the Prohibition of Chemical Weapons.)

To find out how that news was received among school girls, I stopped by the Centre of Science and Technology (COSAT) — a public high school near Cape Town, South Africa, that I have been profiling this year.

I found ninth-grader Olwethu sitting outside. She is a bit of a bookworm and likes to start debates with me — often about U.S. foreign policy. I told her that Malala didn't win the prize, and I asked for her reaction.

“The Nobel Peace Prize should have gone to her because she didn’t use violence,” Olwethu said. “She had the courage to stand up and say, 'If you’re going to hit me, hit me with whatever you’ve got.'”

She said Malala’s story has inspired young women here in South Africa. “She has taught a lot of women outside that you should stand up for yourself — make sure that people don’t think of you as little. They should think of you as someone who’s important and has a role to play in society.”

Some of Olwethu’s friends joined us. I thought I’d broaden the conversation, so I asked if they thought girls in South Africa are treated unequally compared to boys. They said yes.

“They think they’re going to have a grandson,” said Sesihle, a ninth-grader. She said that would mean continuing the family name.

I asked what the girls thought they could learn from Malala. That’s when Olwethu said something that surprised me. She sees Malala as more than a champion of girls’ rights.

“She believes we should let people be equal — not judge them by race, or by color, or by sex,” Olwethu said.

“So you see her as a symbol of not just gender rights, but equality among all people?” I asked.

“Yes, she has the potential to be something very huge in the world,” Olwethu answered. “She has the power to change a lot of people’s minds.”

Olwethu said Malala would continue to change people’s minds — about all forms of equality — even without the Nobel Peace Prize.