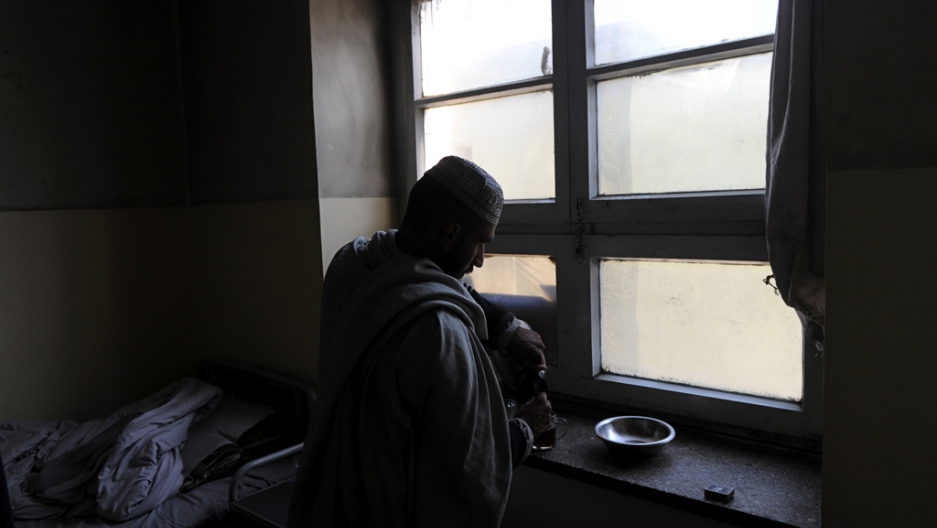 An Afghan man prepares tea near his bed in a psychiatric ward of a local hospital in Kabul. Scarred by decades of war, social problems and poverty, more than 60 percent of Afghans suffer from stress disorders and mental health problems.
Credit: Shah Marai
Share

Ask anyone to name the most pressing global health issues and they’re likely to reel off a list that includes HIV, malaria, malnutrition and maybe even climate change.

All of these are real threats that carry with them dire consequences if we fail to address them. But there’s one issue that is not usually on that list, despite the grave danger it poses: mental illness.

World Mental Health Day is observed annually on October 10 by global giants including the United Nations and the World Health Organization (WHO). Chances are, it’s not on your calendar – but it should be. According to WHO, mental illnesses account for 14 percent of the global burden of disease. And by 2030, the organization predicts, that number will rise to 20 percent. What’s more, the leading causes of disability worldwide are depression and other mental disorders, which afflict more than 450 million people.

Despite the staggering statistics, mental health remains the ugly stepchild of the global health movement; dismissed as marginal and too complex to address. As a result, most of the groups that provide psychological treatment and support for mental illnesses in low and middle income countries have not been able to attract major donors, leaving more than three-quarters of the mentally ill with no care at all.

The “treatment gap” — the gap between the number of people with disorders and the number who actually receive evidence-based care — is as high as 70 to 80 percent in many developing countries.

Why are we, as a global community, turning a blind eye to an issue that is so urgent?

First, there’s stigma. It’s not easy to convince people that mental illness is not a personal, societal or cultural problem, but a pressing global health problem.

Then there’s the issue of payoff. From the perspective of foreign aid groups and non-profit organizations, mental health is a thorny cause to embrace because psychological symptoms can be expensive and difficult to treat. There’s no cure-all or magic bullet, no pill we can dole out with the promise of prevention or immediate relief.

There are also cultural barriers to treatment — how do you launch a successful campaign to address depression or PTSD, for example, in a country where people who suffer from these illnesses are thought to be cursed by evil spirits?

For these reasons, mental health is not a popular issue among celebrities seeking causes to champion. Bono embraced AIDS. Bill and Melinda Gates are tackling malaria. And Angelina Jolie has taken on seemingly every cause affecting the third world – except mental illness.

Vikram Patel, a psychiatrist at the London School of Hygiene & Tropical Medicine and a leader in the crusade to improve global mental health, calls the current conditions for mental health treatment a human rights crisis. Unlike other humanitarian crises, however, he says there has been no global outrage, mainly because some perpetuate the myth that mental illness does not exist.

“We don’t think of mental illness as a problem in developing nations,” Patel said. “And yet it’s even more of a problem in these countries.”

Sean Mayberry, the founder and CEO of Strong Minds, an organization dedicated to relieving depression in African countries, explains the apathy this way: “Mental illness causes disability, not death, so donors and governments don’t feel the urgency to address it,” he said.

Mayberry added, “If we help a 30-year-old mother to avoid malaria by providing her with a net, but she’s severely disabled by a major depressive disorder, have we really helped her?”

With Strong Minds, Mayberry is banking on a growing body of research that shows treating mental illness in countries with few resources is easier than we think. Promising studies in Uganda and rural Pakistan show that training members of local communities to deliver low-cost basic mental health services, including talk therapy and group counseling, can greatly reduce rates of the most widespread psychological illnesses like depression, anxiety and trauma. This approach has the potential to be highly effective in places where people can’t afford to wait for specialists or doctors who have completed years of training in psychiatry.

In Liberia, for example, a pioneering program launched in 2011 by the country’s government – with the support of the Atlanta-based Carter Center – has trained approximately 80 Liberian nurses to deliver basic mental health services. That is a huge victory in a country where it is estimated that more than 40 percent of the population suffers from trauma related to a prolonged, bloody civil war. And where, before 2011, there was only one practicing psychiatrist in the entire country.

While there has been marked progress over the years, global mental health remains largely neglected and misunderstood. But it is an issue we can’t afford to ignore. Take a moment to consider the mental health crises that are currently raging, albeit quietly, in so many corners of the world: Syrian refugee camps, Iraqi cities, Indian farming communities, Afghan villages.

We have the tools are our fingertips – effective interventions that can transform the lives of countless people suffering in silence. What are we waiting for?

Molly Knight Raskin is an author and journalist, most recently with "The NewsHour" on PBS. She writes frequently about psychology and mental health, and is working on a documentary film about trauma in Liberia, West Africa.