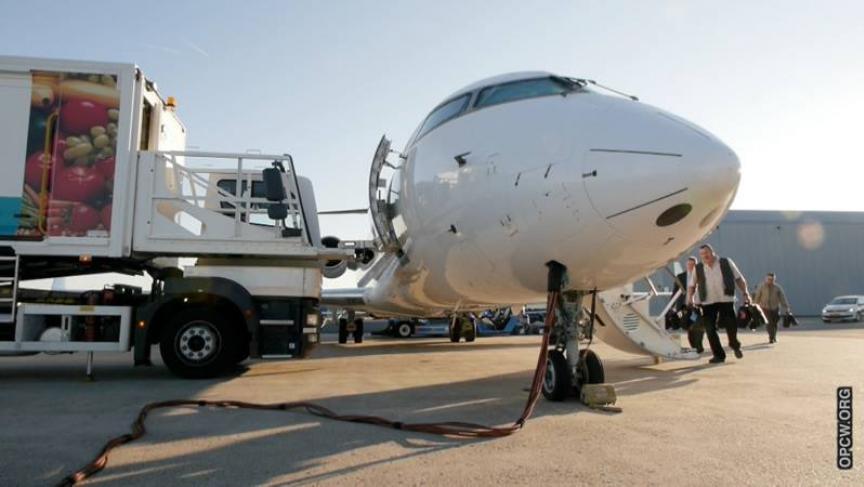 The OPCW Inspection Team leaves for Syria on Sept. 30.

Like just about everyone else, we thought Pakistani girl activist Malala was going to win the Nobel Peace Prize today.

Well, that didn't happen. The United Nations' Organisation for the Prohibition of Chemical Weapons (OPCW) got the nod.

"I am pleased to congratulate the Organisation for the Prohibition of Chemical Weapons for being awarded the 2013 Nobel Peace Prize. This recognition occurs nearly 100 years after the first chemical attack and 50 days after the appalling use of chemical weapons in Syria," he said. "Tragically, the threat of chemical weapons remains a clear and present danger."

Until recently, the OPCW has gotten little attention, said Amy Smithson, a chemical and biological weapons expert at the James Martin Center for Nonproliferation Studies in Washington, DC.

"Prior to this day and the chemical weapons crisis in Syria, they've gone about their work very quietly with very few people paying attention," she said. "The treaty that bans chemical weapons provides inspection rights for OPCW and they literally trot the globe going to military facilities where chemical weapons are stored, in overseeing the destruction of chemical arsenals.

"They've done this in India, in South Korea, in Albania," she says. "They continue to do this in Libya, the United States and in Russia. They also inspect chemical industry facilities safeguarding against any diversion of chemicals into a military program."

Smithson says the people who actually carry out the work are "nameless heroes for the most part, who are now finally getting some recognition from the Nobel committee. They're chemical analysts and engineers, in some cases, weapons experts. The inspectors can come from any of the countries that belong to the treaty and now there are 190 members."

With just 110 inspectors, "they have to be able to send a lot of these people into Syria on very short notice and still do their work around the world, which is why there are plans underway to augment the manpower of this organization," Smithson says.

"Another thing that I hope the Nobel recognition does is help the international community understand that while the nuclear weapon threat is something to be concerned about, let's not forget that chemical weapons were the first weapons of mass destruction to be used on World War I battlefields. They took thousands and thousands of lives... This is something that also needs attention and resources devoted to address [the] problem."