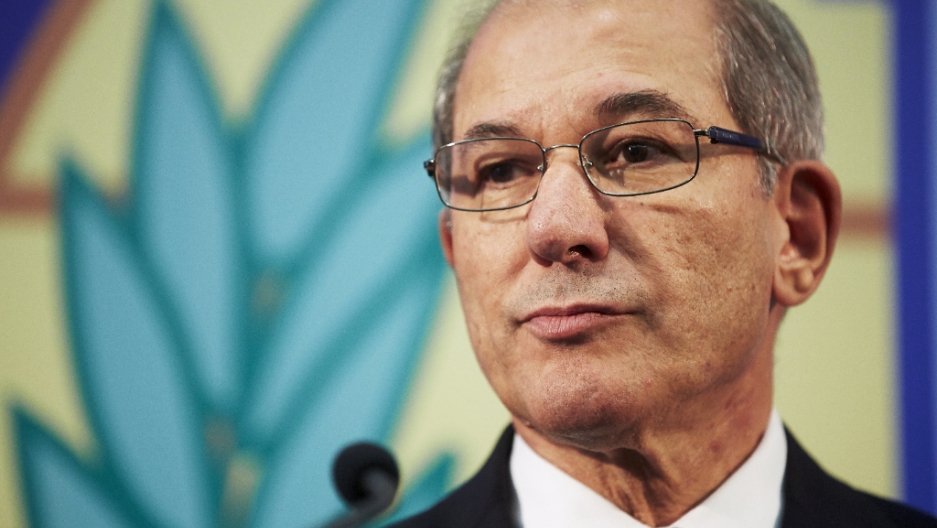 The Organization for the Prohibition of Chemical Weapons (OPCW) won the Nobel Peace Prize on Friday. Here, OPCW Director-General Ahmet Uzumcu briefs jounalists on the progression in the disarmament of Syria's chemical arsenal and facilites on October 9, 2013 in The Hague. Uzumcu called for temporary ceasefires in Syria's raging civil war in order to meet tight disarmament deadlines. The OPCW has been charged with dismantling Syria's chemical arsenal and facilities by mid-2014 under the terms of a UN Security Council resolution drawn up after devastating nerve gas attacks in August.
Credit: Martijn Beekman
Share

In a surprise move, the Nobel Committee awarded the Organization for the Prohibition of Chemical Weapons (OCPW) the Nobel Peace Prize on Friday.

The committee chose to honor the OPCW "for its extensive work in eliminating chemical weapons," Thorbjørn Jagland, Chairman of the Norwegian Nobel Committee, announced in Oslo.

"Recent events in Syria, where chemical weapons have again been put to use, have underlined the need to enhance the efforts to do away with such weapons," the Norwegian jury said in its statement.

Ahmet Uzumcu, the head of OPCW, told Norwegian radio that the Nobel would aid his group's efforts.

"I know that the Nobel Peace Prize will help us in fact to promote the universality of the Convention," he said.

Congratulation OCPW on winning Nobel Peace Prize . Thanks world for your Prayers & Motivation.

OCPW inspectors are currently working inside Syria to identify and eliminate the nation's chemical weapons stockpiles in accordance with a UN-backed deal brokered by Russia and the United States in September.

Syrian President Bashar al-Assad agreed to the plan under threat of military action by the United States and allies after a chemical weapons attack outside Damascus in late August killed an estimated 1,400 people (according to US intelligence).

Assad and the Syrian rebels seeking his overthrow have traded accusations over the use of chemical weapons during the nearly three-year conflict, although Western nations maintain that only the regime has the capability to carry out large-scale attacks like the one in late August.

The inspectors are on a tight deadline. According to Reuters, they must agree on a way to destroy Syria's chemical weapons by November 15 and complete their mission by the middle of next year.

Now a 27-member operation in Syria, the first investigators entered the war-torn country on Oct. 1 and have so far visited three out of a planned 20 sites.

The Guardian said the organization's Nobel win may "count as one of those peace prizes you could categorize as an incentive as much as a reward," given the group's task ahead in Syria.

US Secretary of State John Kerry hailed the OPCW's Nobel win, saying the organization had "taken extraordinary steps and worked with unprecedented speed to address this blatant violation of international norms that shocked the conscience of people around the world."

"Today, the Nobel Committee has rightly recognized their bravery and resolve to carry out this vital mission amid an ongoing war in Syria," Kerry said.

But Jagland said Friday that the Nobel was not awarded to the OPCW "because of Syria, but because of it's long-standing efforts to eliminate chemical weapons."

Established in 1997, the OPCW has 189 member states and is based at the Hague, according to Reuters.

Watch the Friday announcement here and scroll down to see how the win's been received on social media: