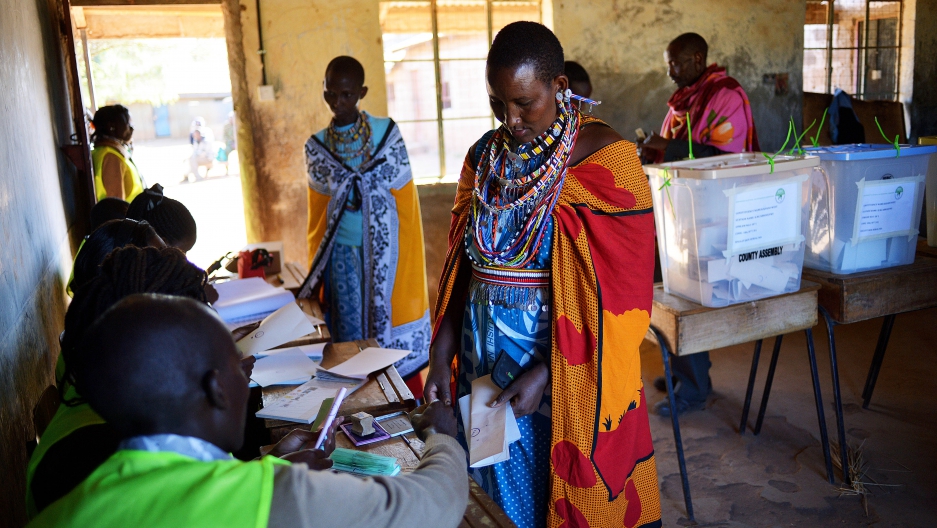 A Maasai woman collects her papers before voting in Ilngarooj, Kajiado County, Maasailand, on March 4, 2013 during the first nationwide elections since the violence-wracked polls five years ago.
Credit: CARL DE SOUZA
Share

NAIROBI, Kenya – Two weeks before the shooting at Westgate mall, a scandal erupted within Nairobi’s political scene. The city’s governor, a man, delivered a slap to the face of a leading female parliamentarian Rachel Shebesh. It was caught on video and immediately made national news.

But reactions to the incident revealed Kenyan society remains divided in how it perceives acts of violence against women. Some say Shebesh deserved the slap for becoming confrontational with the governor. Others say it was an unprovoked act of physical violence that should be prosecuted as an assault.

The division is stark: Many men and some women in Nairobi fall into the former category, but advocates for women’s rights say the incident highlights how violence against women continues to permeate Kenyan society.

“Men make jokes that you have to discipline a woman so she knows that he loves her. And we treat it as a joke,” said Helen Macharia, 70. “We need to start treating it as it is—abuse.”

Macharia was one of one hundred and fifty Kenyans who crowded into a Nairobi hotel conference room Saturday for a full day discussion on gender-based violence, organized by the German-Kenyan women’s advocacy coalition, Maisha.

Among the attendees were dozens of students from nearby Kenyatta University, one of whom said she had been the victim of an attempted sexual assault. Nearly as traumatizing as the experience itself, she said, was the process of reporting it to the police, whose lack of training or interest in prosecuting gender-based crime was debated at length.

“When it comes to handling rape cases, there is so much delay,” said the woman, who is majoring in counseling psychology. “It’s very disturbing. It’s another burden on top of what you have already experienced.”

One of the most emotional moments of the day came when a counselor read aloud the written testimony of a young woman, “Jenny,” who was raped by a man who followed her uninvited back to her room after a date.

“I tried to fight him, but it just happened so quick and my struggling did little,” she wrote. “I just sat there on [the] couch and could not even cry. I didn’t know what to do. I was a virgin and had never really done anything more than kiss a guy before.”

Jenny wrote that at the time she didn’t tell anyone what had happened out of fear that she’d receive the brunt of the blame for ‘leading him on.’

This, say advocates, is the biggest challenge to confronting gender based violence here: women are fearful to report the crimes committed against them, and Kenyan society is reluctant to discuss what one presenter called an ‘awkward’ subject.

“This happens because we have fear to talk to our boys, our girls,” said Martin Wafula, who helped organize the conference and read Jenny’s account. “We have left these issues to be discussed by our politicians, who never mention it. By our peers, who don’t have the time. What is the future of our generation if nobody talks about this?”

Even the comments and mannerisms of several attendees at the conference revealed a certain unease with the subject. As one presenter recounted the ‘slap’ incident by Governor Evans Kidero, some men in the audience chuckled.

Kenya’s religious and cultural traditions sometimes conflict with progressive notions of women’s' rights. Many families and communities defer authority to men, and sometimes even put women’s’ health at risk in the process.

“We have cultures where a 60-year-old man marries a 12-year-old girl,” said presenter Josephine Mwatibo in reference to customs still practiced by some among Kenya’s Maasai ethnic group. A researcher for the Kenyan woman’s coalition COVAW, Mwatibo described the traumatic practices of female genital mutilation and the cutting of female organs after childbirth, urging the audience that “it’s time for us to stand up to challenge these structures.”

In a 2008-2009 survey of Kenyan women by the U.S Agency for International Development, 45 percent said they had experienced sexual violence, one third of whom said the perpetrators had been a partner or family member. Twelve percent said their first sexual intercourse occurred against their will.

Last year Kenyan voters approved a new constitution that has been hailed as a landmark for women’s rights around the globe because it includes an entire chapter defining crimes against women and girls. But many worry authorities aren't taking it seriously—a notion that was reinforced when police reportedly asked a prosecutor to charge not only Governor Kidero but also Rep. Shebesh following the governor’s high-profile slap.

Advocates say the incident underscores the importance of bringing more women into positions of power here. Following elections in March, women took a record 87 seats in Kenya’s 416-seat national Assembly and Senate, up from 22 in the previous, 222-seat body. Last year Kenya announced a special association of women police officers to encourage the enrollment and retention of women officers, who represent only 11 percent of the force.

Ultimately, reducing incidences of violence against women will require a change in attitude and behavior among men. But it remains unclear whether Kenya’s male leaders share the same sense of urgency as their female counterparts.

Two male presenters and a speech by Kenya’s Secretary of Health James Macharia (delivered in absentia) went to great lengths to assure conference attendees that Kenya’s women already have the full support of the government when it comes to preventing and prosecuting violence against women.