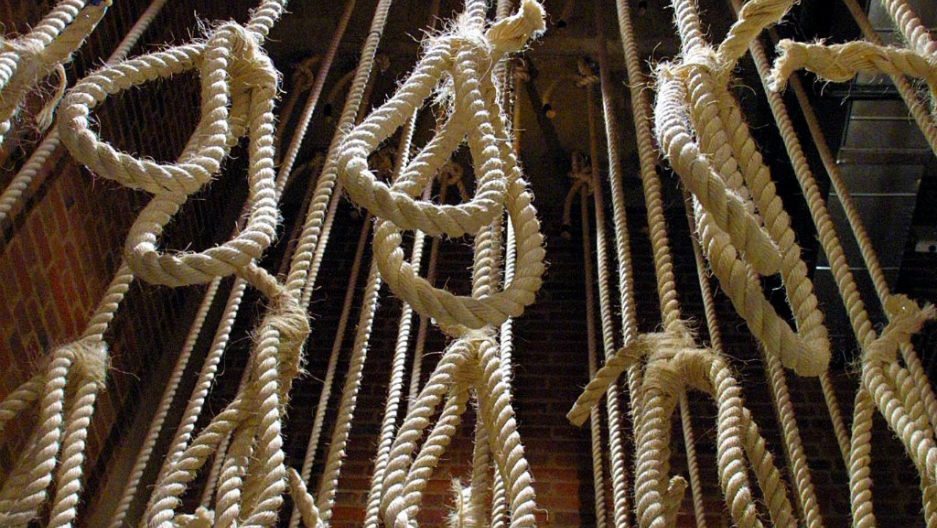 Part of 131 nooses displayed in Johannesurg's Apartheid Museum. Traditionally, there are 13 knots in a hangman's rope--one reason why people fear the number 13.
Credit: Yoav Lemmer
Share

Iraq this week executed 42 people, one of them a woman, on charges of "terrorist crimes," according to Reuters.

The nation's justice minister, Hassan al-Shimary, issued a statement accusing them of killing dozens of people through terrorist activity and "other crimes aimed at destabilizing the security and stability of the country," said Reuters. The statement said a woman was among those killed.

No other information was provided, but the United Nations Assistance Mission for Iraq said the killings took place "between October 8 and 9," reported Agence France-Press.

The announcement comes amid growing violence in Iraq, with over 6,000 people reported killed over the past year in near-daily attacks.

The move raises concerns that Baghdad is using the death penalty as a weapon against perceived aggressors. The government executed 23 people last month, the majority on similar terrorism charges, said AFP.

Rights groups have raised the alarm over that and questioned the fairness of the nation's judiciary.

According to Navi Pillay, the United Nations' representative for human rights, Iraq sees "numerous convictions based on confessions obtained under torture and ill-treatment, a weak judiciary and trial proceedings that fall short of international standards," said AFP.

Human Rights Watch (HRW) has called for a moratorium on the use of the death penalty in Iraq.

“Rather than executing people, Iraq should focus on reforming its security and judicial systems to protect its citizens from increasing human rights violations," Joe Stork of HRW's Middle East and North Africa division said in a Thursday statement.