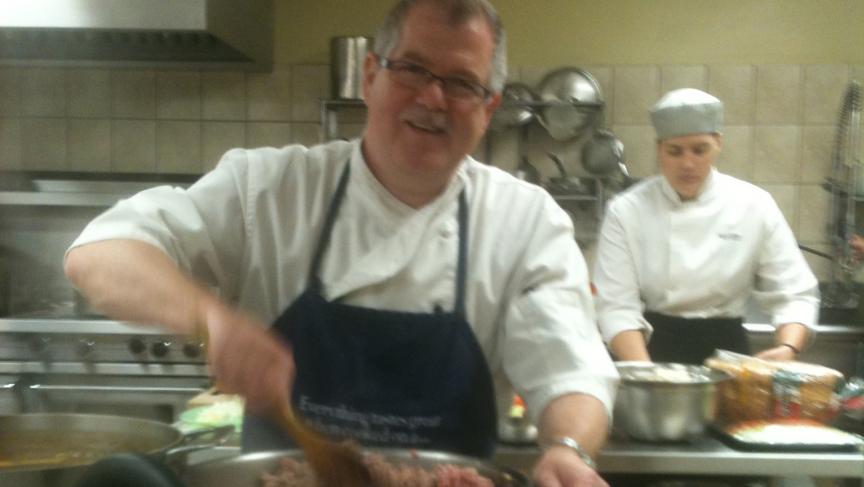 Chef Marc Miron busy in the kitchen at his Cuisine & Passion gourmet shop.

That chapter of history inspired Ottawa chef Marc Miron to wonder what  Champlain and his crews were eating back in 17th century.  The early French explorers may have relied on hardy ingredients brought over on the trans-Atlantic voyage including salt fish, cured meats, and dried peas and beans. Those ingredients make possible a traditional favorite in Canada, Habitant Pea Soup. The recipe for Habitant Pea Soup, an easy to make, hardy meal that Miron says Champlain probably ate, has been handed down over 400 years.

To carry on the French Canadian cooking traditions, Miron offers cooking demonstrations at his Cuisine & Passion gourmet shop in Ottawa.  Nowadays, he prepares Habitant Pea Soup with dried yellow beans, ham hocks, and herbs but its still the hearty, stick your ribs, soups that fortified the 17th century founder of New France.

1. Check peas for small stones and discard discoloured ones.
2. In a heavy soup pot, sweat the diced onion, celery and carrots in the canola oil.
3. Add ham stock and dried peas, bring to a boil, then simmer, skimming foam from the top to remove impurities, until vegetables and split peas are tender. Add the thyme.
4. In a blender, purée half of the soup, then return mixture to the pot. Add the ham hock meat and adjust the seasoning. (When cooking split peas and lentils, Miron waits until the dish is almost done before adding salt and pepper to taste.) Garnish soup with croutons and a sprig of fresh thyme if desired.

1. In a large stock pot, place ham hocks, carrots, celery, onion and cold water (adding more cold water if needed to cover.)
2. Bring to a boil, then reduce heat to a slow simmer. Skim foam off the top to remove any impurities.
3. Add the thyme, bay leaves, parsley and peppercorns. Simmer for 1½ hours, skimming from time to time.
4. Drain stock through a colander, discarding vegetables but setting the ham hocks aside to cool. Cool and refrigerate the stock. Once the ham hocks are cool enough to handle but still warm, clean the meat from the bones, discarding the fatty and skin parts. Chop the meat into bite-size pieces and store in the fridge or freezer until needed.