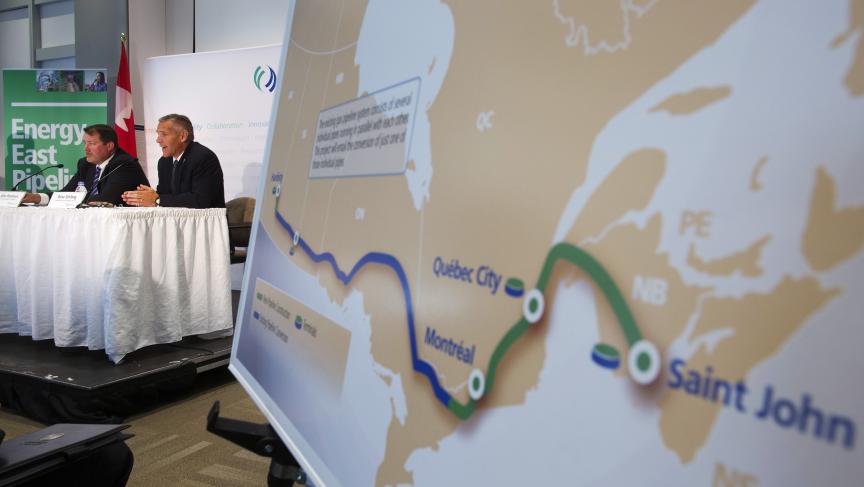 TransCanada President and CEO Russ Girling announces the new Energy East Pipeline during a news conference in Calgary on August 1, 2013. TransCanada Corp says it will move ahead with the $12 billion project to ship Alberta crude to refiners on its east coast and beyond, scaling up the project as its U.S.-bound Keystone XL line stalls in Washington.

Canada has the third largest oil reserves in the world, after Saudi Arabia and Venezuela, mainly in its Alberta province. Until recently, the very heavy crude mixed with sand, clay minerals and water was too expensive to process. That's no longer true, but the government is having another problem - finding any path to move that oil to a coast to export it.

Plans to build pipelines to the Gulf of Mexico and the Pacific Ocean are in question due to environmental concerns. Now, a new front is opening in the effort to move oil out of Canada’s tar sands. The new plan would send the oil from Alberta to refineries on the Atlantic coast.

Supporters tout it as a nation-building project. Opponents say the plans are building something alright, but it's nation-wide opposition to oil pipelines.

Christine McKeen has a front-row seat to the controversy. McKeen opens a gate to a hayfield by her house on the outskirts of Canada’s capital, Ottawa. But there’s more than grass poking out of the ground there. She points to two little stakes on the road. “That indicates the pipeline,” she says.

The pipeline that crosses the land was actually built years ago to carry natural gas to Canada’s interior from the Atlantic coast. Now, the company TransCanada wants to put the old line to a new use. It wants to reverse its flow and add hundreds of miles of new pipeline. TransCanada would convert the line to carry oil in the opposite direction, from the tar sands of Alberta east for export to world markets.

The project, called Energy East, would run right through Ottawa, Montreal, Quebec City, and a number of First Nations, or native American, lands. Like many along the route, McKeen wants no part of it. She worries about spills of the tar sand’s thick, gooey oil, like one that happened three years ago in Michigan. Or worse.

“If there was an explosion out here,” she says, “we're pretty close.”

Harper has made exporting tar sands oil a cornerstone of his government's economic policy. He’s pushed hard for the Keystone XL pipeline across the U.S.to the Gulf of Mexico, and other pipelines that would head west to the Pacific.

Not everyone buys the comparison.

Stoett says Quebec and Ontario are the big battlegrounds for Energy East. And he thinks the prime minister's nationalist pitch could backfire, especially in independence-minded Quebec.

“Quebeckers do not like being told that they have a specific role to play, let's say, in building a broader Canada,” Stoett says.

Without the support of Quebec and Ontario, the project can't happen. And that’s got environmentalists mobilizing. They argue that pumping out what they call Alberta’s “dirty oil” would be a huge step backwards in the fight against climate change, not a step forward for the economy.

“The reality is this isn't about meeting local needs,” says Andrea Harden, an energy and climate campaigner at the Council of Canadians. “This is actually about getting the crude to coastal waters and ensuring that big oil and its government allies are getting the world price for crude produced in the tar sands. Because right now, they’re not.”

TransCanada says the criticism is expected. “Of course our opponents are going to say exactly that, and possibly other things,” says company spokesperson Philippe Cannon.

Cannon says, like the proposed Keystone pipeline heading south, the eastern pipeline is just about getting a vital product to market.

“At the end of the day, it is the safest way to move oil around, and it's not tomorrow that we're going to stop relying on a daily basis on oil in our lives,” Cannon says.

The sensitive issue of moving oil

The benefits and costs of moving oil around by any means are increasingly sensitive issues in Canada, especially among people along the various routes.

Louis Longchamps, from the small town of Lac-Mégantic, Quebec, wonders aloud about the tradeoffs, then answers his own question.

“Are we getting something this from this?” Longchamps asks. “No, we're not.”

Lac-Mégantic doesn't produce or refine oil, but until recently trains hauled crude oil through it. Then, this summer, a runaway oil train exploded there, engulfing the town in flames and killing 47 people. Bulldozers were still clearing rubble from the disaster recently, next to what had been the offices of the local newspaper.

The paper’s editor, Remi Tremblay, says the trains used to carry lumber, which supported the local economy. But oil, he says, is different. He says oil transport towns like Lac-Mégantic bear all the risks, with none of the rewards.

Supporters say the Energy East pipeline would be a safer way to transport oil, but Tremblay thinks that’s the wrong conclusion. He says Canadians should be talking instead about alternative energy and a “new deal between industry and communities.”

Andrea Harden-Donahue of the Council of Canadians says that sentiment is the true “nation-building” aspect of all these pipeline projects.

TransCanada is undaunted. The company will seek approval early next year, and hopes the oil will flow by 2018.

But even if this tar sands pipeline doesn't go through, Peter Stoett at Concordia University thinks the industry will keep trying until one does.

“I would not use the word ‘inevitable,’” Stoett says. “I would use the word ‘likely,’ however. Yes, I think it is likely that one of these projects will go through.”

The economic incentives, Stoett says, are just too high for the proponents to give up.