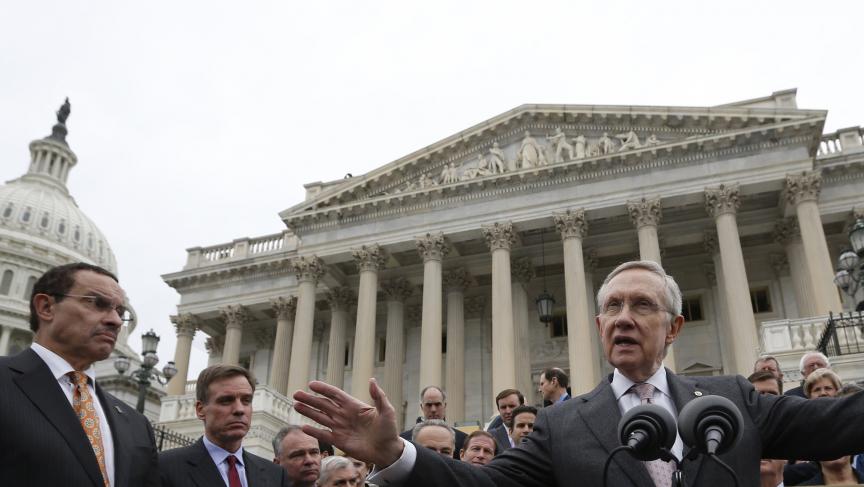 US Senate Majority Leader Harry Reid gathers with other Democratic Party senate members and Washington DC Mayor Vincent Gray (L) on the steps of the US Capitol.

President Obama sought to assuage global worries on Wednesday that the political dysfunction in Washington has allowed the ship of US economic policy to veer wildly off course.

He thanked Ben Bernanke for his service as head of the Federal Reserve, calling him a "stabilizing force" for both the US and the international economy. And Obama announced that he is nominating Bernanke's close ally and second-in-command at the Fed, Janet Yellen, to be the new chair of the Fed.

This might have come as welcome news in capitals and boardrooms worldwide. But there is still lots of nervousness.

"The shutdown is costly, [and] it is stupid," said Oliver Blanchard, chief economist at the International Monetary Fund. "But it's not a major macro event."

If Congress fails to raise the debt ceiling, however, and the US defaults on some of its financial obligations, that is another story.

"The big event, if it were to happen, is clearly the debt ceiling."

The ramifications of US default are so unthinkable, many experts doubt that Washington politicians will allow it to happen. But there is no sign of a way out of this manufactured crisis, and that makes it hard to blame America's friends and foes for wondering if the US is headed off a cliff.

"Nobody knows what that would look like, but it wouldn't be good," said Patrick Chovanec, the chief strategist with Silvercrest Asset Management in New York and a former professor of economics at Tsinghua University in Beijing.

Chinese leaders might not be in a full-blown panic, Chovanec said. At least, not yet. But they are uneasy, because Chinese economic growth is tied directly to the credit-worthiness of the United States.

"There is this notion that China is a big bank," Chovanec explained. "China is actually more like a neighborhood storekeeper who keeps on extending more and more credit to his customers, because he's afraid that if he doesn't extend more credit, they'll stop buying."

That might not be the smartest way to run a business, but it remains the business model for the US and China - the world's two largest economies.

Just like China, Japan is sitting on more than $1 trillion worth of US debt. After two decades of economic stagnation, the Japanese economy is finally showing signs of recovery. And Washington's flirtation with the very idea of defaulting on its debt obligations is a cause for real concern in Tokyo.

"You had the sequestration earlier this year, and then the government shutdown, and the so-called default crisis is coming. You can understand if the Japanese public will become more worried as these crises occur again and again," said Satoru Mori of Hosei University in Tokyo.

And there are worries are about the potential political fallout, as well. Take, for example, the Trans-Pacific Partnership (TPP). This is a gigantic new trade pact in the works that would encompass around 40 percent of the world economy and would include Japan, the US and much of the Asia-Pacific region.

The Obama administration has been working for three years to bring the pact to life and wants to wrap up negotiations by the end of this year. The problem is, Mori said, that Japan is losing faith in Washington's ability to do its part.

"Even if we conclude a broad agreement by the end of the year," Mori asked, "will President Obama be able to push this through Congress?"

The impasse in Washington could have geo-political ramifications that are worse than the economic ones, said Xenia Dormandy of Chatham House, a think tank in London.

"That has huge consequences," she said. People and governments in authoritarian states, Dormandy said, might conclude that America's model of democracy is nothing to emulate. US allies might come to believe that "America isn't as reliable as it once was."

"And it has consequences for adversaries, who can say, 'we can do whatever we want, because America is not going to be able to act when push comes to shove,'" she added.

At a White House news briefing on Tuesday, Obama was asked if America's friends overseas should be worried about the political meltdown in Washington. He acknowledged that there is concern. But he suggested that as long as this sort of crisis doesn't keep repeating itself every few months, things can turn out fine.