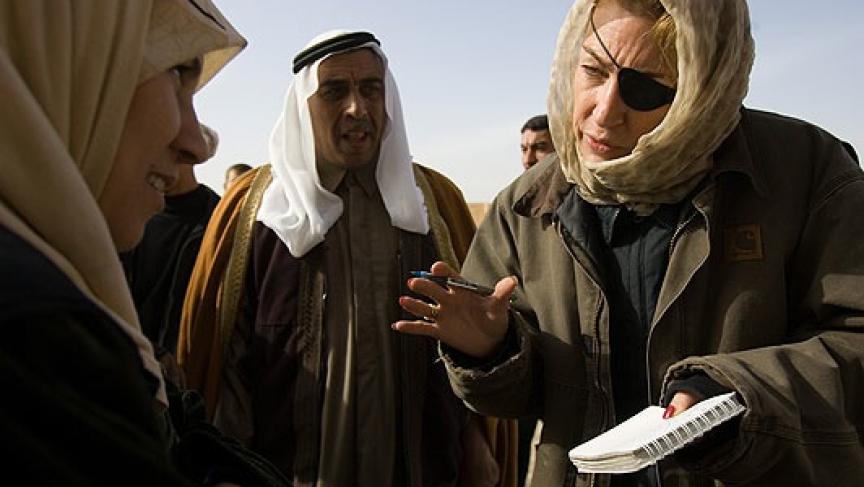 Marie Colvin interviews a woman in Iraq in 2007.

The regime of Syrian President Bashar al-Assad is cooperating with United Nations weapons inspectors to the satisfaction of the Obama administration, according to Secretary of State John Kerry.

But this is just the beginning. The Syrian civil war continues after two years, with the U.N. estimating 100,000 have been killed and millions more have been displaced as a result of the conflict.

Among the dead is Marie Colvin, an acclaimed reporter for the British Sunday Times who was killed in Homs in February 2012, along with French photojournalist Remi Ochlik. The makeshift media center where she was located was struck in a bombardment carried out by the Syrian regime.

Paul Conroy was also at the media center when it was attacked and was badly hurt in the attack that killed Colvin. Colvin had invited Conroy to join her in Syria when the fighting broke out in 2011. Conroy has turned that reporting trip with Colvin, who was famous for the eye patch she wore after an incident in Sri Lanka, into a new book, "Under the Wire."

Turns out, writing the book was a form of therapy for the survivor.

"When I was brought out of Syria, and had the bad injuries — I couldn't walk and was in a hospital bed — in essence I brought Marie back to life writing the book," Conroy said. "I remember sitting, writing, and just going through virtually every conversation we had on that final assignment."

Conroy says as the final rocket was launched, he was actually preparing his camera to document what residents go through during a barrage. They'd already survived three previous rocket detonations relatively unscathed.

"I just felt like a piece of stone, a rock had hit me, like I'd been hit by masonry," Conroy recalled. "When I put my hand down to feel the wound my hand slipped through my leg — it went in one side and out the other."

After applying a make-shift tourniquet, he started looking for Colvin. He quickly found her, as well as Ochlik, and realized they were both dead.

But while the book recounts the final incident, it goes beyond that. It also looks at how Colvin related to people — even making them laugh in seemingly dark circumstances.