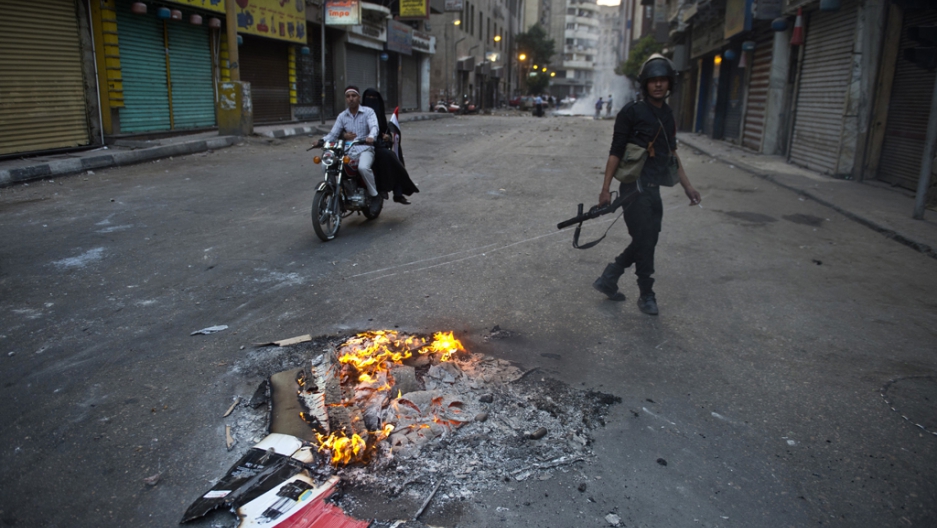 CAIRO, Egypt — After jihadists rocked Egypt with triple dawn attacks on Monday, a resurgence of violence is jeopardizing the country’s transition to fresh parliamentary and presidential elections, experts say.

A drive-by shooting in the Suez Canal city of Ismailia on Monday killed six soldiers out on their morning patrol. Shortly afterward, a car bomb exploded outside South Sinai’s security directorate, killing two and injuring 48.

In Cairo, militants damaged a satellite dish — part of the country's main television transmission system — in the upscale suburb of Maadi. It was the most serious attack on the capital since last month's assassination attempt against the interior minister outside his home.

The attacks came the day after holiday celebrations ended in deadly clashes nationwide between police and opponents of the July military takeover. With a death toll of 53, it was one of the bloodiest days since the violent coup.

On Tuesday, a jihadist group called the Furqan Brigades posted a video online claiming responsibility for the Cairo attack. They described it as part of an ongoing war between "Sunni Muslims and infidels who intended to uproot Islam from the land of Egypt."

It called for attacks on the military, which overthrew Islamist president Mohamed Morsi on July 3, describing its members as "infidels" unworthy of mercy.

The Furqan Brigades rose to public prominence in August when the group claimed responsibility for two attacks, one of which targeted the Suez Canal, Egypt’s most vital trade route.

While questions remain over the level of coordination between Monday’s attacks, experts consider them a marked escalation from the sporadic attacks that have plagued Egypt, particularly North Sinai, since July.

“It certainly looked like a real escalation, especially if you consider the attack in [Cairo],” said David Hartwell, a Middle East analyst at IHS Jane's. “This is part of a trend going back three or four months. Now, militants in northern Egypt seem to be importing the same capabilities for their own attacks.”

At this stage, though, Hartwell says that there are no outward signs of coordination among groups staging attacks; rather, a general trend toward violence against state personnel and installations.

The specter of militant attacks now looms large over Egypt’s political scene. The interim president, Adly Mansour, insists that officials are closely following a political path that will end in fresh parliamentary and presidential elections early next year.

But the ongoing political transition has been underpinned by the broad use of violence and repression against the opposition, which has exacerbated polarization between supporters and opponents of the military takeover. The leadership of Morsi’s Muslim Brotherhood, once a powerful political force, is now mostly behind bars. Hundreds of the former president’s supporters have been killed and thousands detained.

On Tuesday night, multiple media outlets citing anonymous US officials reported that the US will soon suspend most of its military aid to Egypt in the wake of the country's persistent turmoil. A spokeswoman for the National Security Council, however, denied the reports.

The crackdown is being portrayed as a war on terror, with Egypt’s military-backed authorities drawing an explicit link between the Brotherhood’s Islamist ideology and the country’s rising insurgency.

"We are responsible before God to continue fulfilling the mandate, we will protect Egypt and the Egyptians, this is a promise," he said in a speech.

On Tuesday, an Egyptian newspaper carried an interview in which General Sisi alleged that senior Brotherhood officials had warned of attacks if Morsi were removed from power.

According to Professor Emad Shahin, a political scientist at the American University in Cairo, the current political course will not diminish the country’s simmering divisions unless it is accompanied by a national reconciliation process.

“The situation has reached a violent stalemate,” he said. “ The idea that one side can impose its will on its opponents by eliminating them or repressing them is not going to work. We knew from day one that this coup was taking the country down the road of violence and counter-violence.”

Shahin does not believe that an effective reconciliation process can take place until all sides commit wholeheartedly, something he sees little sign of at present.

“Right now,” he said, “the whole stage is set the wrong way.”