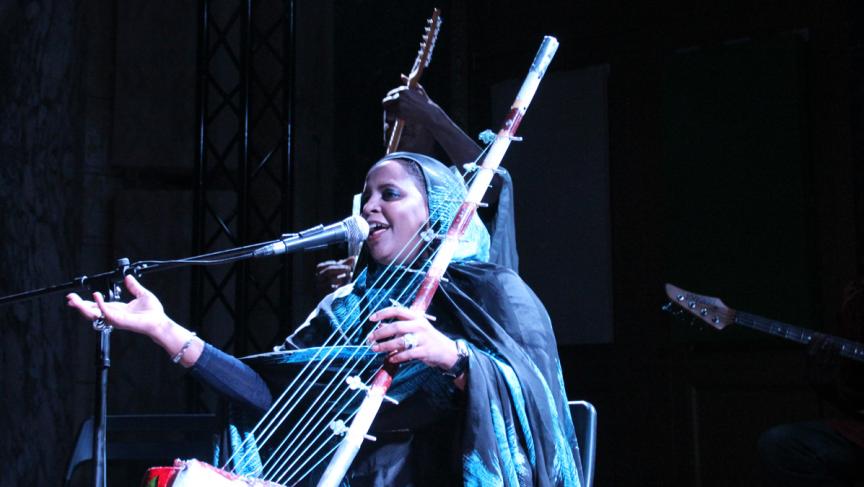 Noura Mint Seymali, with her husband Jeiche Ould Chighaly behind her, playing at the Issue Project Room in Brooklyn on her first US tour.

Think of Africa’s main musical exporters, and you probably think of places like Mali, Nigeria, maybe Algeria or Morocco. Mauritania is likely not on that list. Noura Mint Seymali wants to change that.

She comes from a prominent musical family in Mauritania. Her music mixes older Mauritanian music with blues and rock, and she’s taken it around North Africa, Europe and the Middle East. She was just in the US for her first tour here.

She played in Brooklyn, with a band that features her husband Jeiche Ould Chighaly on guitar, Ousmane Touré on bass, and Philadelphia-native and Senegal resident Matthew Tinari on drums. The band quickly had the crowd swaying and dancing.

Seymali, like her husband, comes from one of Mauritania’s premier griot families. Her father wrote an authoritative book on the country’s music, and her step-mother, who Seymali started singing with when she was 13, was one of the few Mauritanian musicians to gain an international following.

Seymali takes this heritage seriously, seeing it as her calling to tell the rest of the world about her country’s music. That’s not always an easy task—it doesn’t have nearly the international stature that music from neighboring countries like Senegal, Mali, and Algeria has. She thinks that’s partially because of a lack of government investment in the arts.

It may also be related to geography. Mauritania bridges Arab North Africa and Sub-Saharan West Africa, and the music takes in healthy pieces of both regions. But it doesn’t fall fully into either world.

Seymali’s music also, obviously, bridges past to present. The band’s latest album is called "Azawan" – the word for the traditional ensemble in Mauritanian music. You can hear some tracks from it on their SoundCloud page.

Chighaly’s winding guitar takes up the role the tidinit would play in a traditional Mauritanian griot group, and a western drumkit replaces hand drums.

The lyrics are a mix too, songs about traditional Mauritanian food share space with ones about environmental awareness and breast cancer.

But Seymali says that her heart is in tradition—particularly when she’s touring the US She wants to present a pure picture of the music of her country, even if she funks it up here and there.

Being hard to classify isn’t necessarily bad. For one thing it’s meant some pleasantly eclectic billings for the group.

They shared the stage in Brooklyn with a young improvising drummer and a guitarist who’s a longtime stalwart of the city’s experimental music scene. Listening backstage, Seymali smiled curiously and said she liked it.

“What kind of music is it?” she asked in French.

“Avant garde,” a band-mate told her.

Her adventures in American culture also took her to Louisville, Kentucky—home to a large Mauritanian expat community. Has she found any American food she likes? I asked. She loves fried chicken, she says.

Back in Brooklyn, the band’s closing song marches forward with a heavy funk backbeat.

The crowd is on its feet. They’ve blown through the venue’s 10 p.m. curfew, so an encore’s not in the cards.

Back in Mauritania, their shows can go on for a long time. Here, the neighbors complain.