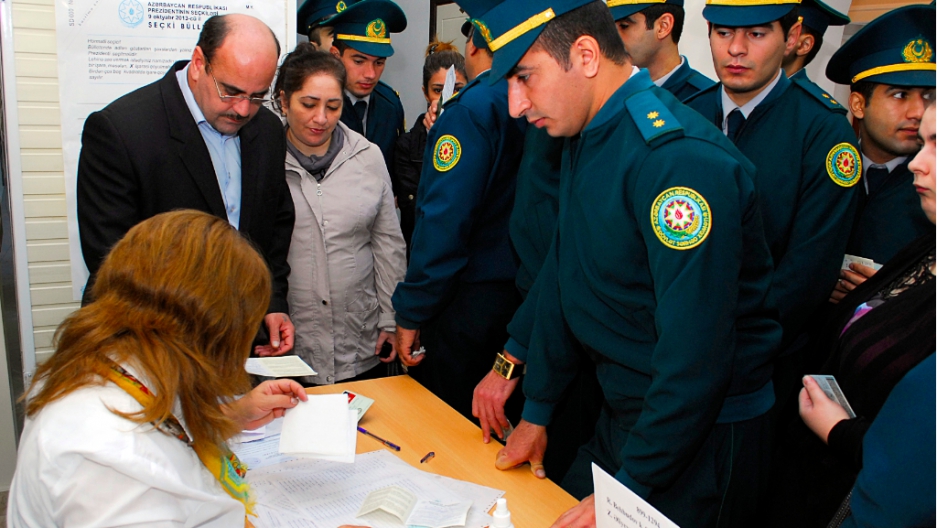 Azeri Army officers wait in line before voting on October 9, 2013 at a polling station in Baku during presidential elections. Oil-rich Azerbaijan voted in a presidential election on October 9 that looks certain to see strongman Ilham Aliyev seal a third term, with critics claiming a widespread crackdown on his foes ahead of the poll.
Credit: TOFIK BABAYEV
Share

Exit polls indicated a big win for Azerbaijani President Ilham Aliyev in Wednesday's vote, which would extend his grip on power in the resource-rich Caspian Sea nation for another five years.

Aliyev was ahead by nearly 84 percent in a poll run by the independent Prognosis company, according to the Associated Press. Reuters, citing results from a number of Azerbaijani non-governmental organizations, reported a similar figure.

A BBC correspondent said the nation's longtime leader didn't even bother to campaign for office, despite facing a united opposition coalition for the first time.

The opposition accused the government of rigging the vote, but independent observers — of whom there were about 100 — had not yet reported any major irregularities.

Hasanli told journalists earlier Wednesday that the opposition "registered cases of ballot stuffing at a number of polling stations."

"Regrettably, many government officials are involved in falsification, becoming accomplices of a grave crime," he added, according to the AP.

Aliyev has held power since the passing of his father Heydar in 2003. His administration has been widely criticized for rights abuses — particularly in the run-up to Wednesday's vote.

Constitutionally barred from a third term in office, Aliyev changed the constitution in a disputed 2009 referendum.

Meanwhile, the vote in Azerbaijan has been the subject of much discussion on Twitter: