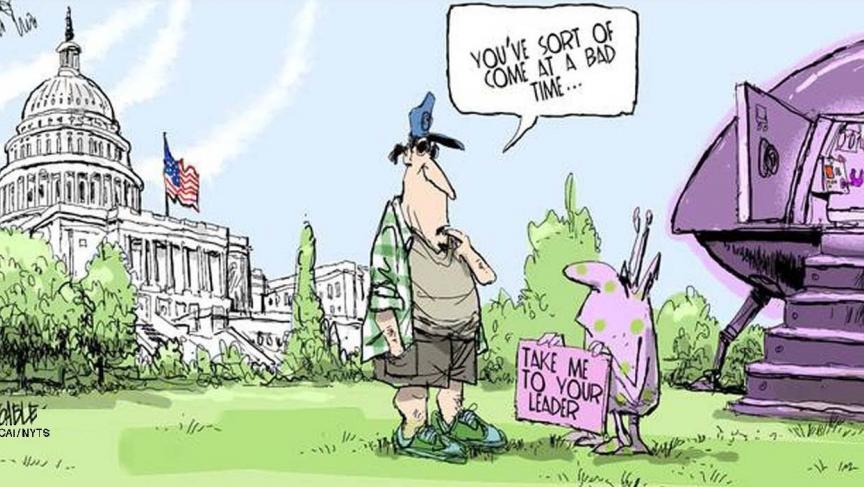 The government shutdown causes a missed opportunity in this cartoon by Canada's Brian Gable of The Globe and Mail.

The airlines would dearly love you to pay attention to the pre-flight safety announcements they make whenever you take a plane journey. But you don't.

However, you might think twice now about zoning out with your book. As the UK's Independent reports, you might end up landing the aircraft yourself.

So how do you persuade pirates to hand over their hostages without a ransom? “With great difficulty,”

The Telegraph interviews a man who has devoted himself to negotiating with Somali pirates. British Col. John Steed is working to secure the release of dozens of seafarers still being held hostage, who were abandoned by their employers, their governments and even their families.

Would you have the guts to go to Somalia and declare war on the terrorist group once there? PRI's The World tells the story of the Somali-American imam who did just that.

When jobs go wrong: How I ended up shooting hoops for Gaddafi

Buzzfeed reports on a private roast this week celebrating former Vice President Dick Cheney. One of the laugh lines, according to the story? Sen. Joe Lieberman joked it was a good thing they could all gather at such a nice New York hotel, rather than in jail cells awaiting war crimes trials.

The Atlantic explores why Russian security services have clamped down hard on environmentalists. Hint: it's about oil and gas.

I'd say lady-protestors in the former Soviet Union are far bolder than any others these days. cc @miriamelder http://t.co/eksgcJ0ggg

Another tropical system is taking aim at Asia this week. Tropical Cyclone Phailin in the Bay of Bengal is expected to make landfall Saturday or Sunday and bring heavy rainfall to eastern India, possibly impacting millions of people.