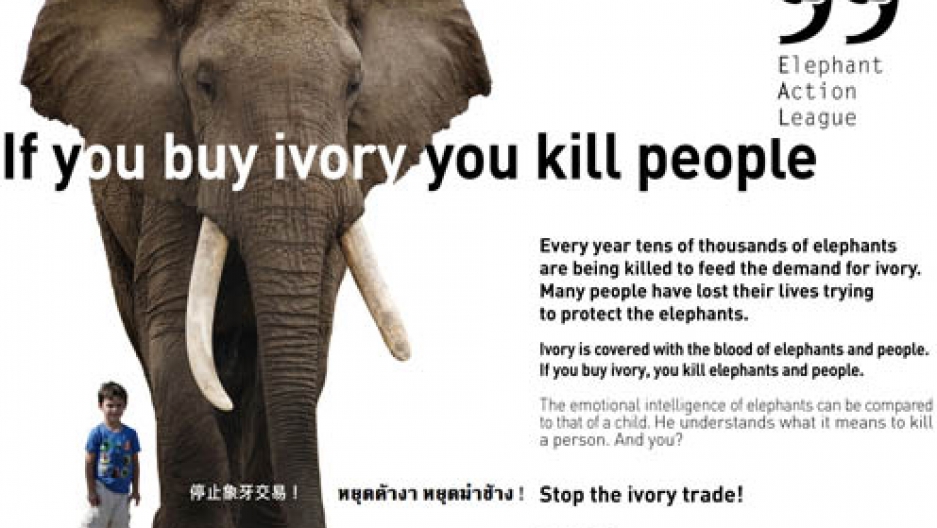 Andrea Crosta says his group detected the first hint of al-Shabab's link to ivory in 2011, when they saw large amounts of ivory flowing into Somalia.

"We decided to go beyond the rumors to look for evidence," says Crosta, who is executive director of the Elephant Action League based in the Netherlands. "We began a two-year investigation. We met traffickers, traders, ex-war lords, poachers and soon we began discovering a worrying picture — worrying for elephants and for people."

Elephant Action League recently completed a two-year investigation into illegal poaching in Africa. And it led to al-Shabab, the Islamic militant group in Somalia that raided and occupied Nairobi's Westgate Mall for several days last month.

Al-Shabab is buying illegal ivory from poachers, says Crosta. His group documented an estimated one to three tons of ivory going into Somalia each month through al-Shabab traders. He says that's a lot of money, "enough to fund of up to 40 percent of the monthly salary of Shabab's estimated 5,000 fighters."

"And they really need money, because many of the low-level Shabab people are driven by money concerns, as much as ideology," he said. "For Shabab, ivory is just a commodity, like kidnapping, like charcoal, like shaking down small business owners. Compared to other kinds of sources, it's a relatively easy source of funding, so thousands of people will risk their lives to get it."

Crosta believes his group's elephant poaching study shows that poaching has a more profound effect on people than most suspect.

"The human toll of the ivory trade is much wider and deeper than al-Shabab. It's not just about terrorists making money, it's not just about the rangers dying trying to protect the elephants and the rhinos and other wildlife. It's about entire local communities getting exploited by this market. It's about widows and orpans, it's about child soldiers, it's about weapons bought to poach," he said. "I think it's time for the international community to face the broad spectrum of those side effects of the ivory trade."

Most important, Crosta says the investigation should make consumers stop and think.

"Buying ivory, legal or illegal, you indirectly fund a long chain of criminal activities," he said. "So if law enforcement is going after those criminals, those terrorists, my question is: should we start going after ivory buyers, ivory consumers, because indirectly they are the origin of everything?"