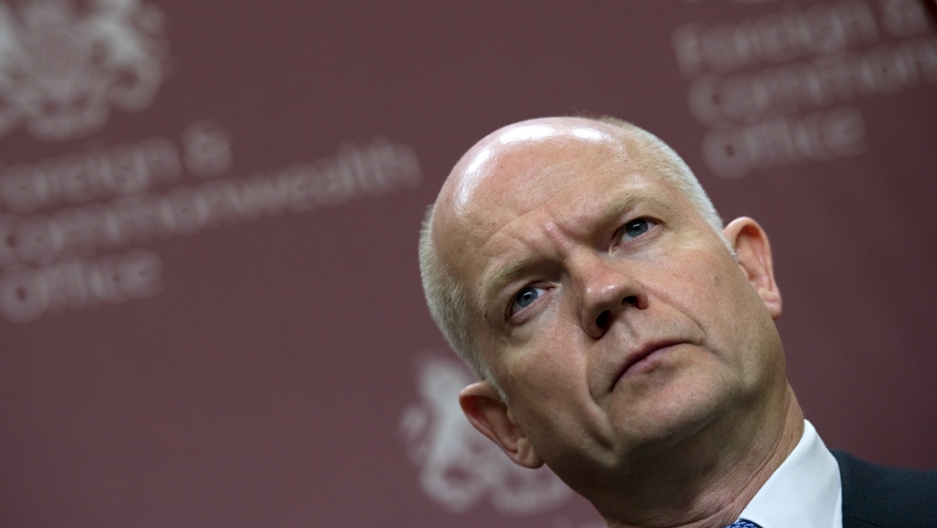 It is reported on March 11, 2012, that Britain's Foreign Secretary William Hague is likely to be sued by a London law firm for complicity in passing information to the US while it planned drone attacks.
Credit: ADRIAN DENNIS
Share

The United Kingdom will appoint a non-residential charge d'affaires for Iran as the two nations work toward reopening embassies, officials said on Tuesday, according to Iran's Press TV.

The proposal was reportedly floated on the sidelines of the United Nations' general assembly in New York, where Iranian President Hassan Rouhani appealed for reconciliation between the Islamic Republic and world powers.

The UK closed its embassy in Tehran two years ago after it was attacked by angry students.

But British Foreign Secretary William Hague told lawmakers on Tuesday that he sees a "marked change" from the Iranian side, reported Reuters.

He also said the coming months "may be unusually significant" for relations between the two countries, said Sky News.

According to Hague, both Iran and the UK will appoint a charge d'affaires "tasked with implementing the building of relations, including interim steps on the way towards [the] eventual reopening of both our embassies," he said, according to Reuters.

"It is clear that the new president and ministers in Iran are presenting themselves and their country in a much more positive way," Hague told lawmakers.

"Pursuant to a decision by the Iranian parliament, it was agreed that from today the two countries have a relationship at the level of non-resident charges d'affaires," Iranian foreign ministry spokeswoman Marzieh Afkham told local press, according to Agence France-Presse.

A chargé d'affaires is a rank lower than a full ambassador and is usually assigned when diplomatic presence is at a mimimum.