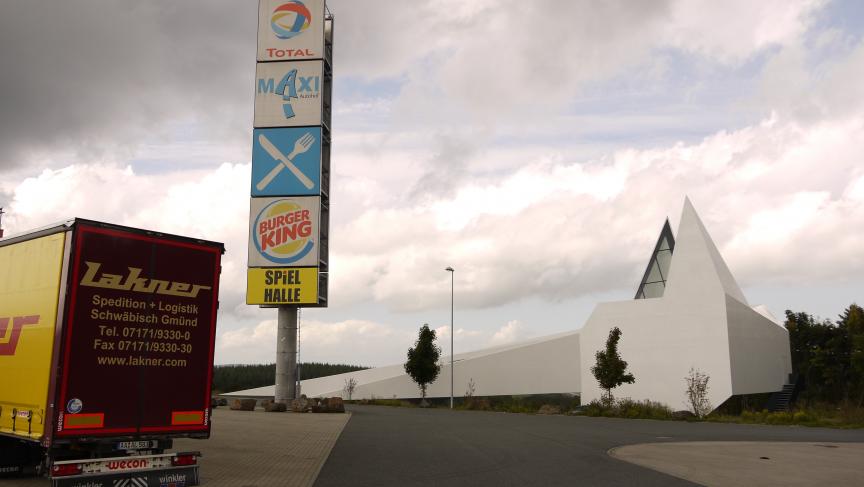 Germany's newest Autobahn church, tucked in among restaurants and the gas station.

Cars, trucks, and 18-wheelers race down the highway that connects Dortmund with Frankfurt. About halfway between, drivers exit to fuel up at the Siegerland rest stop.

Most highways have at least a few rest stops, places where you can fill up the tank, fill up your stomach and prepare for the next leg of your journey. In Germany, that refueling sometimes takes a spiritual turn.

At the Siegerland stop, a jovial bunch of seniors from the Netherlands get out to stretch their legs. Gert Eijkelkamp and his buddies bypass the Burger King, gas station, hotel and casino and head toward a pointy futuristic-looking white building at the edge of the rest stop.

“We saw this newspaper with an article about this church along the highway,” says Eijkelkamp. “This is beautiful, very beautiful. We are surprised.”

Siegerland recently became home to Germany's 40th motorway church. Since the 1950s, these churches have popped up along major highways. Some are Protestant; some are Catholic. Siegerland's is ecumenical. All are designed to provide spiritual refreshment to travelers of any faith.

“We want to have a church in that cruel place between the McDonald fast food, between a hotel, between a game land. To say, well, this is not everything we have. It is life and everything has its place but there is something more,” says Ute Pohl, chair of the Siegerland church society.

“We started in 2009 and then we had something we call in German a ‘Wüstenwanderung,’ a march through the desert,” she says. “It was a very hard time because we could collect money but then we had to find people who could build this and that wasn't that easy.”

“The question was, how can you build a church — a tiny, small nice church in this place — without making it ridiculous,” says Michael Schumacher, one of the executive directors of Schneider & Schumacher, the architecture firm in Frankfurt that was chosen to build the church. 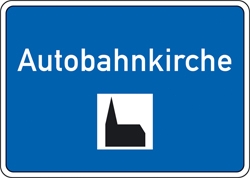 Schumacher says the highway sign that points to Germany’s motorway churches served as inspiration. From the side, the Siegerland church mimics the shape of the road sign, all bright white with rectangular angles. From the front, visitors see two points on the roof that look like cat ears — or Batman.

“Most people said from the outside they were a bit irritated,” says Schumacher, “and then, from the inside it swept into a completely other feeling — a feeling of really being home and liking it.”

Inside the church, a raw wooden lattice dome creates an intimate space. Natural light filters in through a skylight above the altar. The noisy drone of the highway drops to a low murmur.

“It’s a very good atmosphere,” says Gaby Schumacher, who is stopping by the church with her husband, Thomas, for the third time. She does think the exterior is a little stark, though.

Even though Germany has seen a drop in regular church attendance, motorway churches continue to attract about a million visitors a year. Schumacher says she noticed others in the church writing in the guest book, from truck drivers to regular travelers.

“When you look at the book, there are a lot of people who write something good, something bad, and it's a very good station for a little bit meditation.”

Her husband, Thomas, adds it’s a good place to reflect.

“It is a part of life to travel, but it is a part of death when you have an accident on the highway, so the church is a good place to stop for a moment.”

Travelers can stop in 24 hours a day. Siegerland's motorway church is always open and ready for those looking for some direction.