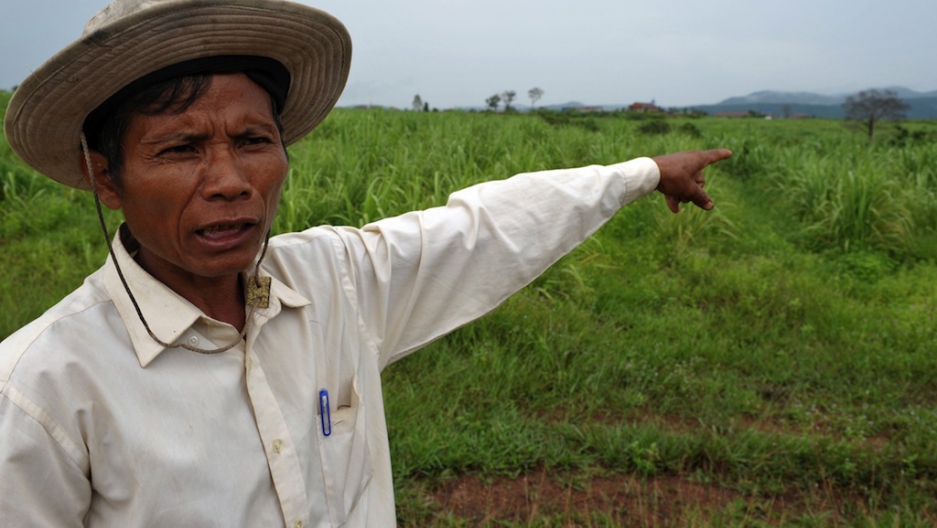 KOH KONG, Cambodia — Song Kong wouldn’t think of buying a Coke or Pepsi at his local village store in rural Cambodia. With an income of about $1.50 per day, he needs to save every penny to keep his five children from starving.

Despite Kong’s thriftiness, Oxfam contends that the soft drink powerhouses are already taking food from his children’s mouths.

In a report released earlier this month, the organization alleges that a plantation whose sugar ends up in the companies’ products has robbed 457 families of their farmland — their primary source of income.

Coca-Cola and Pepsi companies have promised to look into the allegations. After Oxfam released the report, both companies issued statements acknowledging the problem of land grabs.

"We sympathize with the citizens whose lives and livelihoods have been affected,” Coca-Cola said. “While the Coca-Cola system does not buy sugar directly from any suppliers in Cambodia, we have agreed to convene a facilitated stakeholder dialogue to discuss Oxfam’s overall findings of the assessments and next steps, demonstrating the company’s commitment to transparency and the importance placed on stakeholder engagement."

PepsiCo didn't respond to GlobalPost's request for interviews. In a statement, Coca-Cola told GlobalPost, “through our Sustainable Agriculture Guiding Principles, we are asking our suppliers to recognize and safeguard the rights of communities and traditional peoples to maintain access to land and natural resources. We are working to promote respect for Human and Workplace Rights by the farm and the employer of workers at the farm, whether or not the employer is the farm itself.”

In the jungles of southeastern Cambodia, Kong vividly remembers the day in May 2006 when a bulldozer arrived without warning to prepare their rice paddy for a large-scale sugar cane plantation.

Kong had farmed the land since 1979, he said, just after the fall of the Khmer Rouge regime, under which an estimated 1.8 million Cambodians perished in fewer than four years. In its drive to create a communist, agrarian society, the regime had killed intellectuals, blown up the national bank and destroyed all documents of land ownership, leaving millions of farmers vulnerable to evictions as they still lack proper land titles.

“Before the plantation came, life was good and I could save some money for my family. Now I have to fish, but I just make a little bit, enough to get by from one day to the next,” Kong said.

Cambodia's sugar exports rose to $13 million in 2011, an increase of 270 times compared to two years prior. Ninety percent of these exports went to the European Union, under the European Union's Everything But Arms trade scheme, which allows products from the world's poorest countries to be imported duty-free.

Much of the sugar, Oxfam says in its report “Nothing sweet about it: how sugar fuels land grabs,” is sold to a European company that supplies Coca-Cola and PepsiCo, which in addition to colas produce second tier beverages such as Minute Maid, Nestea, Powerade, Sprite, Dr Pepper, Fanta, Dole and Tropicana. These drinks contributed to a 2012 annual profit of $10.8 billion for Coca-Cola, and $8.3 billion for PepsiCo.

The multibillion dollar sugar business has made many rich, but others, like Kong, have lost everything. The ubiquitous poverty in Kong's community has forced many families to send their children to work on the very plantation that displaced them.

“We don't have any money saved. We simply make enough money for each day at a time. What else should we do?”

Catering to consumers’ insatiable sweet teeth, sugar cane plantations worldwide already cover an area the size of Italy. Over the next seven years, consumer demand for sugar is expected to grow by another 25 percent, Oxfam said, adding that it believed that more families in developing countries would be violently forced off their land to make room for sugar that ends up in the chocolate bars we eat and the beverages we drink.

Oxfam's associate country director in Cambodia, Gertjan van Burchern, argues that to change the situation, brands must take more responsibility for their supply chains, and consumers must raise questions about ingredients' origins. Strict criteria, he said, should be in place that make sure that companies do not source ingredients produced while violating land rights.

“Of course it would cost money. [But] if consumers start to raise questions, it will definitely be worth the companies' effort and money” to focus on the origin of their sugar supply.