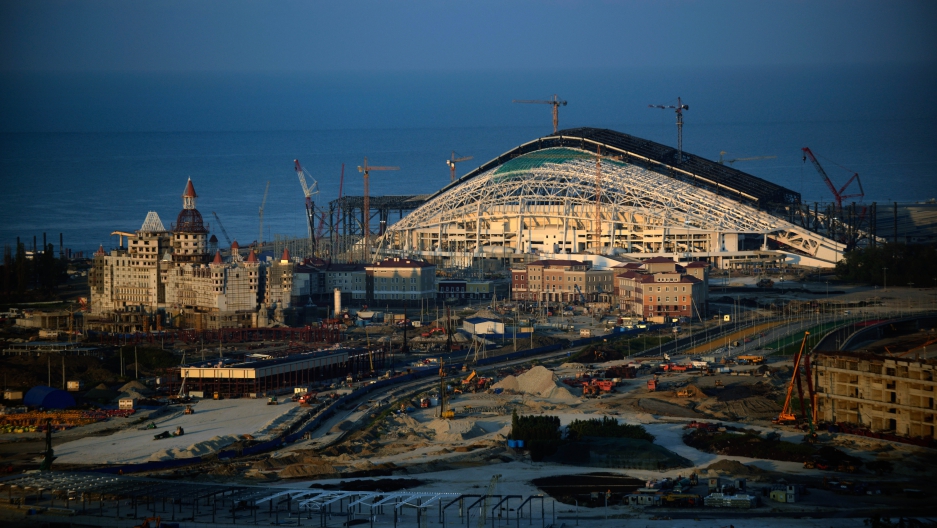 The main Olympic Stadium, the "Fish," is under construction at the Olympic Park in Adler, outside the Russian Black Sea resort of Sochi, the host of the 2014 Winter Olympics, on August 22, 2013.
Credit: Mikhail Mordasov
Share

With the 2014 Winter Olympics four months away, Russia's role as host has been tarnished for many by outrage over its “homosexual propaganda” law that threatens to imperil gay athletes and spectators who openly represent their sexual preference.

But the International Olympic Committee performed its final inspection of the Sochi venue last month, and despite the "serious floods that have turned much of the city into a quagmire and ongoing protests from campaigners for LGBT rights," the Washington Post reported, "an IOC delegation praised the 'magnificent' venues and promised a 'fabulous experience.'"

Now in light of new revelations that Russia will deploy "some of the most invasive and systematic spying and surveillance in the history of the Games," it may be the case that the LGBT uproar has been overshadowing lesser-known concerns about possible threats of violence targeting the the venue, which is located in the volatile North Caucasus.

Experts say that while they think a successful strike by Islamic separatists against the Olympics is unlikely, the Kremlin’s methods of preventing terrorism may create more complications for the unstable region.

Having been able to contain—but not totally extinguish—the violence in Chechnya, the territory where alleged Boston Marathon bombers Dzhokhar and Tamerlan Tsarnaev were born, and its neighbors Dagestan and Ingushetia, where Islamic rebels have been at arms for two decades of secessionist contention, Putin is now calling for a “new security push” in the region.

Moscow issued a decree last month “in the name of security,” which said “the suppression and neutralization of the terrorist and criminal threat… is especially important in connection with the holding of the Olympic Games in Sochi in 2014.”

The order bans meetings and limits movement around Sochi for a month before the games through a month after them. He has also called for “mobilizing all force structures and improving the coordination, quality and results.”

Still, regional violence has been reported as recently as last week, when two "militants" were reportedly killed.

Earlier this month, a car bomb exploded outside of a police station in Chechnya, killing three and wounding five more. Car bombings are rare in Chechnya, and Kremlin-backed Chechen leader Ramzan Kadyrov—who has for years been internationally condemned for grave human rights violations—has called on the entire region to “fight terrorism together.”

"If we want to eradicate terrorism, North Caucasian regions must pool their efforts in the first turn," a statement posted to the Chechen administration's website quoted Kadyrov as saying.

The International Crisis Group reported earlier this month that in the North Caucasus, “Europe’s worst armed conflict” where “deficits of democratic legitimacy and accountability, grave human rights violations and officials’ impunity have contributed much to the spread of conflict,” at least 1,225 people were killed in 2012 and 495 in the first six months of 2013.

Sochi, however, is expected to be highly militarized throughout the Olympics, and is at a distance from the region’s more hostile areas. Dagestan lies 396 miles to the east of Sochi, and Chechnya 345 miles, in mostly tough terrain.

The Kremlin's safety measures include plans to mobilize some 40-50,000 soldiers and police officers, who have been running security drills in anticipation, and unleash two drone helicopters, says Sufian Zhemukhov, the Heyward Isham Visiting Scholar in Russian and East European Studies at George Washington University.

According to information received and published by The Guardian, Russia's Federal Security Service — a successor agency of the Soviet-era KGB — plans "to ensure that no communication by competitors or spectators goes unmonitored during the event." The newly amended Sorm system, which is Russia's telephone and internet spying system, has been described by experts as the NSA's "Prism on steroids."

Paul Goble, owner of the blog Window on Eurasia and professor at The Institute of World Politics said Moscow has Olympic security “locked down.”

“We’re talking helicopters, we’re talking horses, naval presence,” Goble said. “This Olympics is under lock and key. It will be nothing like China. Instead, it’ll be like a gulag Olympics.”

All the money, however, has not necessarily meant that the construction around Sochi and the Olympic arena, known as “The Fish,” has been smooth.

“The North Caucasus is still one of the worst regions in the world for violence. East to west,” Goble explained. “With all this security—if you put all the sources around Sochi, you pull them from somewhere, and you can’t control everything… The area is a mess—fences don’t fit together, underpasses are falling apart—they’ve messed up the infrastructure so much that terrorists could use it to orchestrate an attack… Putting the Olympic games in Sochi is like putting them in Beirut—it is outrageous.”

But the stepped-up security ought to deter rebels, Goble predicts.

In fact, according to experts, the games may serve as a pretext to throw Russia’s weight in the area.

Goble said one of the ways to justify being repressive is to pretend there are terrorist threats that the government has prevented, while providing no evidence as proof. Mark Kramer, of Harvard University’s Davis Center for Russian and Eurasian Studies and head of The Harvard Project for Cold War Studies, does not think this is what is happening in Moscow.

“I can understand the argument but don’t find it plausible because there’s no better way to deter people from attending, especially very important participating teams, and that would be a grave embarrassment to Moscow,” Kramer said. “I would actually say it is the complete opposite. I worry that Moscow will try to create an image of stability, whitewashing some real threats that do arise, and subsequently it will collapse.”

Kramer said part of Putin’s claim to legitimacy was re-establishing control over Chechnya, which has bolstered his popularity among Slavic Russians. The breakaway republic was the site of two brutal wars in the 1990s and now is run by proxy leader Ramzan Kadyrov.

“His reputation depends on whether the region will remain under Russian control, which he looks like he’s succeeding in doing although it’s still a mess,” Kramer added.

Sufian Zhemukhov, who is writing a book on the Sochi games that includes a chapter on security measures, said regardless of any ongoing regional conflict, he believes “the organizers of the Olympics will do anything they can to be safe.”

Goble says one of the ways in which Moscow plans to maintain control of violence in the North Caucasus is to change leaders in the region.

With the Sochi Olympics quickly nearing, he believes that any change can cause trouble similar to what is already being seen in Dagestan.

Changes in leadership have already begun throughout the region, including in Dagestan, but regional and local elections that took place in 2012 quickly became messy, resulting in the Kremlin’s decision to “go back on major reform to increase regional democratization.”

Indirect polls, which took place in Dagestan and Ingushetia on Sept. 8, became problematic after Putin decided on three candidates for each assembly. In both cases, according to the International Crisis Group’s report, the incumbent and two opponents were “not real rivals.”

“His choices suggest that the assembly votes will be formalities,” the report said, going on to point out that Prime Minister Medvedev also “provoked the outrage of the republican opposition by his remark with regard to Ingushetia: ‘I think elections should be everywhere ... in cases where the political culture is still a bit different, we can have a transitional period.’”

Regardless of any preventative measures the Russian government might take, Goble fears the “inevitability” of some kind of violent occurrence in the region, resulting in a severe authoritarian response handed down from Moscow.

“The area around Sochi is a violent place, and what concerns me is you might see just enough of a violent event somewhere to justify the kind of crackdown they want anyway,” he said. “And no one will question Moscow if they have something to point at.”