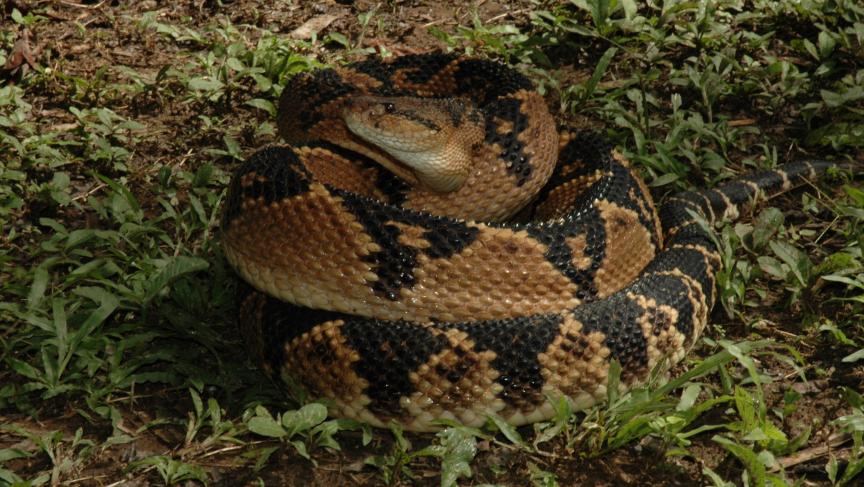 This South American Bushmaster isn't the only poisonous thing winding its way through the world right now.

The world is a dangerous place for humans and beasts. The BBC meets Dr. Rodrigo Souza, a man who has one of the more difficult tasks in conservation — persuading people to save Brazil’s deadliest poison snakes. It’s not an easy sell with local people, nor with the snakes:

“They have no idea who I am and I know they would not hesitate to kill me."

Even gentle animals have it hard these days. In the Indian Ocean, hungry giant manta rays have lost their appetite, for sex. The Guardian has the story.

Yet this weekend, some of the world's deadlier problems began to be fixed, starting in Syria.

The International Organisation for the Prohibition of Chemical Weapons got to work in Syria, destroying equipment for the manufacture and loading of chemical weapons. In addition, Syrian technicians began destroying warheads used to deliver the toxic chemicals.

The work is racing against a Nov. 1 deadline to destoy the mixing and production facilities that created the chemical agents, Agence France Press reports.

At the same time, another type of poison — that of religious intolerance — is leaking from Syria.

Recently, we reported on how Turkey's Alevi community was helping the Shia Alawite refugees from Syria. The Independent’s Patrick Cockburn explains how the religious divisions in Syria are sparking divisions among communities and refugees in neighboring Turkey.

In Pakistan, though, terrorists targeting Christians are seeing a very different message.

Protecting a church with their bodies

Aroosa Shauk at Pakistan’s Tribune reports on a remarkable gesture of solidarity against religious violence in Lahore, Pakistan.

The Atlantic’s Brian Feldman reports on how a casual remark, in every sense, by Israeli Prime Minister Benjamin Netanyahu has provoked a sartorial backlash in Iran.

After a week in US, struck by how calmly American public sector workers react to being furloughed. Imagine the demos in the UK. Or France.

Over the weekend, China was battered by Typhoon Fitow, which the BBC reported caused at least 2 billion yuan, $330 million, in damages. The storm was rapidly weakening as it moved inland. But the Joint Typhoon Warning Center is already keeping an eye on Typhoon Danas. The center expects Danas to move northwest toward China, before taking a hard right turn and running between South Korea and Japan over the next 48 hours.

She's all tied up. Lady Liberty struggles to be free of political wrangling in this cartoon by Mexico's Dario Castillejos.