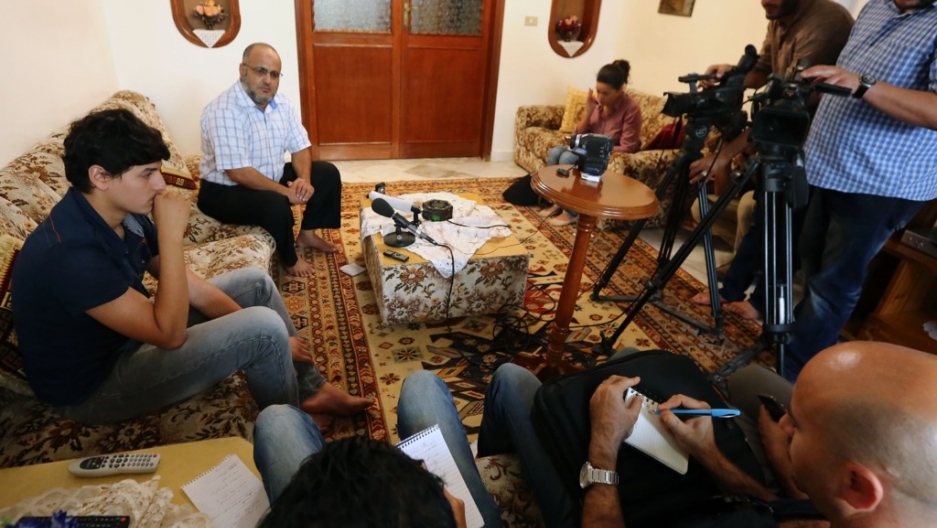 Abdul Moheman al-Raghie (L) and Nabih al-Raghie, the son and brother, respectively, of Al Qaeda suspect Abu Anas al-Liby, speak to the press in Nofleine, five kilometers from the Libyan capital Tripoli on Oct. 6, 2013. Al-Raghie said he does not trust the Libyan government, which he believes is implicated in his father's capture on Oct. 5, but Libyan authorities insist they were unaware of the special forces operation that captured Liby.
Credit: Stringer
Share

TRIPOLI, Libya — Public feeling in Libya toward Americans seems to have darkened since US commandoes seized an alleged senior Al Qaeda operative over the weekend in the capital, Tripoli.

The Libyan government has called on the United States to explain itself following what they said was a surprise “kidnapping” by US forces on Saturday. The US, however, maintains that it did the right thing.

“We hope that this [action] makes clear that the United States of America will never stop in its effort to hold those accountable who conduct acts of terror. And those members of al-Qaeda and other terrorist organizations literally can run, but they can't hide,” Secretary of State John Kerry said Sunday.

"We will continue to try to bring people to justice in an appropriate way, with hopes that, ultimately, these kinds of activities against everybody in the world will stop," Kerry said.

Scattered protests were held Sunday in Benghazi, where the US consulate was violently attacked in 2012, following the weekend raid, with demonstrators carrying Al Qaeda flags and other paraphernalia, a Libyan official said.

Jamal Bennor, a judge and a leader in the Coalition for the Revolution of the 17th of February, an influential group of lawyers and judges, told GlobalPost Libyans are angry about the breach of their sovereignty.

“The Libyan people feel it’s not just an interference, it’s an insult. The US sees our government as so weak, we cannot do anything. I see us as defeated. We have failed to prove to the world we can uphold the law and security here. It’s a blow to lose the trust of the international community to deal with our own matters.”

What’s more, the raid is likely to escalate the security crisis inside Libya, he said.

“Now, I’m so afraid of the Al Qaeda reaction. … We may see an exodus also of foreigners from the capital,” Bennor said, adding that he fears an increase in targeted bombings and assassinations of foreigners.

“These events will encourage extremists to react against our civil rights. These extremists think by violence only. This presents a new obstacle in terms of our domestic life. I cannot predict what will happen.”

The raid won’t help the economy, either: Bennor worries foreign investors will pull out of Libya, taking badly needed development dollars with them.

“I feel this is not the right time for the US to be making such actions, but I understand it. It means they have lost trust in our government and they have lost hope in the February 17 revolution,” he said.

A former rebel fighter who’s still a member of a kateba, or militia, in Misrata, told GlobalPost that the US needs to show more respect for his country.

“I think this is such a bad thing for Libya. We need help to rebuild our country, but instead the US is causing problems between us. No one from America will be able to stay here. The people from Libya will make so many problems for foreigners and this is the fault of the US government,” he said.

The former rebel added that Libyans can fight their own battles. “They seem to think the Libyan people are stupid, but look at how we handled Gaddafi.”